Adam Charles Clayton (born 13 March 1960) is an Irish musician best known as the bass guitarist of the rock band U2.[1] He has resided in County Dublin since the time his family moved to Malahide when he was five years old in 1965. Clayton is well known for his bass playing on songs such as “Gloria”, “New Year’s Day”, “Bullet the Blue Sky”, “With or Without You”, “Mysterious Ways”, “Get on Your Boots”, and “Magnificent”. He has worked on several solo projects throughout his career, such as his work with fellow band member Larry Mullen, Jr. on the 1996 version of the “Theme from Mission: Impossible” Clayton, as a part of U2, has won 22 Grammy Awards.

Adam Charles Clayton is the oldest child of Brian and Jo Clayton, born on 13 March 1960 in Chinnor, Oxfordshire, England. His father was a pilot with the Royal Air Force, who moved into civil aviation, and his mother was a former airline stewardess.[4] When he was 4 years old his father worked in Kenya as a pilot with East African Airways,[4] the family being resident in Nairobi (Clayton regards this as the happiest period of his childhood).[4] In 1965 the family moved to Malahide, County Dublin in the Republic of Ireland, where Clayton’s brother Sebastian was born.[4][5] The Clayton family became friends with the Evans family (including their son David Evans, who would later become a fellow band-member with Clayton in U2).

When he was eight years old he was sent to the private junior boarding Castle Park School in Dalkey, Dublin.[4] He did not enjoy or respond well to its ethos not being particularly sports orientated, and found it difficult to settle socially there. He was interested in pop music, which students were not allowed to listen to.[4] He joined the School’s ‘Gramphone Society’, which met to listen to classical music. He also took piano lessons for a short time..His introduction to the world of popular music was around the age of 10, listening to rock operas such as Jesus Christ Superstar and Hair, and other material that was midway between classical and popular music

At age 13 he entered the private St. Columba’s College secondary school in Rathfarnham, Dublin. Here he made friends with other pupils who were enthusiastic about the pop/rock music acts of the period, including The Who, The Beatles, The Grateful Dead, and Carole King. In response he bought a £5 acoustic guitar from a junk-shop near the Dublin quays, and began learning elementary chords and songs.[4] John Leslie, who shared a bunk bed with Clayton at St. Columba’s, persuaded him to join in with a school band where Clayton would play the bass guitar for the first time. His mother purchased a bass for him when he was 14 years old on the basis of a given promise that he would commit himself to learn to play the instrument.

“Adam was Mrs Burns because he did come over like an old woman sometimes.”

—The Edge on how The Virgin Prunes nicknamed Clayton.[4]

He later changed school to Mount Temple Comprehensive School in Dublin, where he met future bandmates, Paul Hewson (aka “Bono)” and Larry Mullen Jr., who were also pupils there, and was reunited with his childhood friend Dave Evans (aka “The Edge”). In September 1976 Mullen put an advert onto the school’s bulletin board seeking other musicians to form a band; Clayton showed up for the first meeting and practise, so did David Evans with his older brother Richard (“Dik”), Paul Hewson, and Ivan McCormick and Peter Martin who were two of Mullen’s friends. McCormick and Martin left the band soon after its inception.[8]

While the band was a five-piece (consisting of Bono, The Edge, Mullen, Dik Evans, and Clayton) it was known as “Feedback”. The name was subsequently changed to “The Hype”, but changed to “U2” soon after Dik Evans left.[9] Clayton stood in as the nearest thing that the band had to a manager in its early life, handing over the duties to Paul McGuinness in May 1978.[5]

In 1981, around the time of U2’s second, spiritually charged album, October, a rift was created in the band between Clayton and McGuinness, and the three other band members. Bono, The Edge, and Mullen had joined a Christian group, and were questioning the compatibility of rock music with their spirituality.[9] However, Clayton, with his more ambiguous religious views, was less concerned, and so was more of an outsider, until Bono’s wedding to Alison Hewson (née Stewart), in which Clayton was the best man.[10][11]

“Life was pretty chaotic. I don’t really like that kind of intensity, I don’t like that sort of activity, so whilst I was able to go along with it, I wasn’t really in control, it would be fair to say. Every night was a party, but I don’t think I felt much contentment or peace, that’s for sure. I’d be fine during the day, I’d be fine for the gig but afterwards it was too easy to go out all night or just keep drinking in your room. I was beginning to realize that every time I drank, I couldn’t really be sure of the result. And it always made the next day worse. So I decided to lay off and stop drinking during the final leg of the tour.”

—Adam Clayton regarding his alcoholism

Clayton made international headlines in August 1989 when he was arrested in Dublin for carrying a small amount of marijuana. However, he avoided conviction by making a large donation to charity, and has later been regretful, saying “It was my own fault. And I’m sure I was out of my head – emotionally apart from anything else. But it is serious because it is illegal.” Clayton has also had alcohol problems, which came to a head on 26 November 1993 when he was so hung over that he was unable to play that night’s show in Sydney, the dress rehearsal for their Zoo TV concert film. Bass duties had to be fulfilled by Clayton’s technician Stuart Morgan. After that incident, however, he gave up alcohol.

In 1995, after the Zoo TV Tour and Zooropa album, Clayton headed to New York with bandmate Mullen to receive formal training in the bass; until then Clayton had been entirely self-taught.[13] During that period, he worked on U2’s experimental album, released under the pseudonym “Passengers”, entitled Original Soundtracks 1. That album features one of the few instances where Clayton has appeared as a vocalist; he spoke the last verse of “Your Blue Room”, the album’s second single. Prior to this Clayton had only provided live backing vocals to tracks such as “Out of Control”, “I Will Follow”, “Twilight” and “Bullet the Blue Sky”. Since 1997’s Popmart tour Clayton has not sung live in any capacity for the band. In 1996, while still in New York, Clayton collaborated with Mullen to re-record the Mission: Impossible theme.[2] 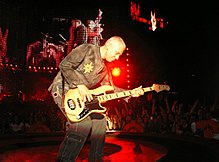 Adam Clayton performing at a Vertigo Tour concert in 2005.

As a bass player, Adam Clayton’s most recognizable basslines include “New Year’s Day”, which evolved out of an attempt to play Visage’s song “Fade to Grey”, and “With or Without You”.[5][14] His style includes Motown and reggae influences,[15] and cites artists such as Paul Simonon of The Clash as influences on his musical style.[14] When Clayton first joined the fledgling U2, he did not have formal training in the bass. In the band’s early years, he generally played simple parts in 4/4 time.[ Bono said of Clayton’s early bass playing, “Adam used to pretend he could play bass. He came round and started using words like ‘action’ and ‘fret’ and he had us baffled. He had the only amplifier, so we never argued with him. We thought this guy must be a musician; he knows what he’s talking about. And then one day, we discovered he wasn’t playing the right notes. That’s what’s wrong, y’know?”

Clayton has sung on some occasions, including on the song “Endless Deep”, the B-side to the single “Two Hearts Beat As One” from 1983. Clayton also sang backup vocals on “I Will Follow” during live performances in 1983 and 1984. He also spoke the last verse of “Your Blue Room”. Clayton can be heard speaking on “Tomorrow (’96 Version)” (a rerecording of “Tomorrow” that he arranged) a song from U2’s 1981 album October.[17] He plays the guitar on a few occasions, most notably the song “40”, where he and guitarist The Edge switch instruments. He also plays the keyboards on “City of Blinding Lights” and “Iris (Hold Me Close)”.

Throughout his career, Clayton has used both Fender Precision and Jazz basses. His first bass, however, was a dark brown Ibanez. Two years later, at the age of 16, Clayton got his first Precision, as he felt he needed a better guitar to master the instrument, and asked his father to purchase a second-hand Precision for

him when Brian Clayton travelled to New York. He previously used Ashdown amplifiers before switching to Aguilar Amplifiers. Clayton’s Precision basses are modified with a Fender Jazz neck; in an interview with Bass Player magazine, he said that he prefers the Jazz bass neck because it is more “lady-like” and is a better fit in his left hand.[14] In 2011 the Fender Custom Shop produced a limited-edition signature Precision Bass built to his own specifications in a limited run of 60 pieces, featuring an alder body and a gold sparkle finish.

“So there I was, fifteen years old, with a dark brown Ibanez-copy bass guitar and no amp. I had no idea what I was supposed to do with it. Absolutely none. Not a clue. It just sounded good to me. Deep and fat and satisfying.”

Clayton has worked on several side projects throughout his career. He played (along with the other members of U2) on Robbie Robertson’s self-titled album from 1987, and has also performed with Maria McKee.[22][23] Clayton played on the song “The Marguerita Suite” on Sharon Shannon’s self-titled debut album which was released in October 1991.[24] He joined U2 producer Daniel Lanois and bandmate Larry Mullen Jr. on Lanois’s 1989 album Acadie, playing the bass on the songs “Still Water” and “Jolie Louise”.[25] In 1994, Clayton played bass along with bandmate Larry Mullen Jr. on Nanci Griffith’s album Flyer, playing on the songs “These Days in an Open Book”, “Don’t Forget About Me”, “On Grafton Street” and “This Heart”.[26] Clayton and Mullen also re-recorded the Theme from Mission: Impossible for the Mission: Impossible soundtrack. The song became a top ten hit in the U.S., reaching No. 7 on the Billboard Hot 100.[27] They recorded the soundtrack while both Mullen and Clayton were in New York City for musical training.[5] The “Theme from Mission: Impossible” was nominated for the “Best Pop Instrumental Performance” Grammy in 1997, also reaching #7 on the US Billboard chart.[2][28][29] He also featured on Little Steven’s 1999 album Born Again Savage.

Clayton remained a bachelor for several decades until his marriage in 2013. During the early 1990s, he dated British supermodel Naomi Campbell. He also had a long-standing relationship with Suzanne “Susie” Smith, a former assistant to Paul McGuinness; they were engaged in 2006, but the pair broke up in February 2007.[30] According to the Sunday Independent, he fathered a son in 2010. This was confirmed by Bono while introducing his band mate during their 360 tour. On 4 September 2013, Clayton married former human rights lawyer Mariana Teixeira de Carvalho in a ceremony in Dublin. Originally from Brazil, Mariana now works as a director at a leading contemporary art gallery, Michael Werner in London and New York.

In 2009 the High Court ordered the assets of Clayton’s former housekeeper and PA be frozen after it was reported that she misappropriated funds of €1.8 million.[ At the subsequent trial that figure was stated to be €2.8 million.[35] The PA denied the charges but in 2012 was convicted by a jury of 181 counts of theft and sentenced to 7 years imprisonment.

In 2011 Clayton became an ambassador for the Dublin-based St. Patrick’s Hospital’s Mental Health Service ‘Walk in My Shoes’ facility.