Casale’s music career spans more than 40 years. He came to prominence in the late 1970s as co-founder and bass player of the new wave band Devo, which released a Top 20 hit in 1980 with the single “Whip It”. Casale is one of the main composers of Devo’s music and made major lyrical contributions to the band’s songs, while also designing Devo’s distinctive attire (including the energy dome, plastic pompadours, and yellow radiation suits) over the years with Mark Mothersbaugh and directed most of Devo’s music videos. He is one of only two members (along with lead singer and keyboardist Mothersbaugh) who have been with Devo throughout its entire history.

Casale began his solo career in 2005 while still a member of Devo with the project Jihad Jerry & the Evildoers. The project received little promotion beyond a music video for the single “Army Girls Gone Wild.” Jihad Jerry performed at several shows near the end of Devo’s 2006 tour, performing the song “Beautiful World”. He has also performed occasionally with other bands.

Casale has also directed music videos for other recording artists, including The Cars (“Touch and Go”), Rush (“Mystic Rhythms”), A Perfect Circle (“Imagine”), Foo Fighters (“I’ll Stick Around”), Soundgarden (“Blow Up the Outside World”), and Silverchair (“Freak” and “Cemetery”), among others.

Gerald Vincent Pizzute was born on July 28, 1948, in Ravenna, Ohio. He was born with the last name Pizzute because his father, Bob, had legally changed his name (his birth name having been Robert Edward Casale) to that of his foster parents. Four years after Gerald’s birth, his father changed his name back to his birth name. Gerald Casale grew up in Kent, Ohio and graduated from Theodore Roosevelt High School in 1966.

Prior to Devo, Casale had played bass guitar with The Numbers Band in his native Kent, Ohio. He caused friction in the band by suggesting that they should incorporate advertising jingles and other “low culture” elements into their music. He was forced out of the band after slipping on a monkey mask during a performance.

After leaving the Numbers Band and graduation, Casale attended Kent State University, majoring in Art (focusing on fine/performing arts and fashion-related studies). In the late 1960s, he was a self-described hippie until the May 4, 1970 shootings. Being involved with Freshman orientation at the KSU Honors College, he personally knew two of the victims, Jeffrey Miller and Allison Krause, and was near Krause when she was shot. Casale described that day in multiple interviews as being “the day I stopped being a hippie”.[7] Together with Bob Lewis and Mark Mothersbaugh, Casale used the shooting as a catalyst to develop the concept of Devolution, forming the band Devo in 1973.

According to Casale, the album Oh, No! It’s Devo’s sound was inspired by reviewers alternately describing them as both “fascists” and “clowns.”[9] Following the commercial failure of their sixth studio album Shout, on which Casale sang the majority of the tracks, Warner Bros. dropped Devo. Shortly after, claiming to feel creatively unfulfilled, Alan Myers left the band,[10] causing the remaining band members to abandon the plans for a Shout video LP, as well as a tour.

In 1987, Devo reformed with new drummer David Kendrick, formerly of Sparks to replace Myers. Their first project was a soundtrack for the flop horror film Slaughterhouse Rock, starring Toni Basil and they released the albums Total Devo (1988) and Smooth Noodle Maps (1990), on Enigma.

Devo had a falling out and played two shows in 1991 before breaking up. Around this time, members of Devo appeared in the film The Spirit of ’76, except for Bob Mothersbaugh. Following the split, Casale began a career as a director of music videos and commercials, working with bands including Rush, Soundgarden, Silverchair and the Foo Fighters.

In 2005, Devo recorded a new version of “Whip It” to be used in Swiffer television commercials, a decision they have said they regretted. During an interview with the Dallas Observer, Casale said, “It’s just aesthetically offensive. It’s got everything a commercial that turns people off has.”

In 2006, Devo worked on a project with Disney known as Devo 2.0. A band of child performers was assembled and re-recorded Devo songs. A quote from the Akron Beacon Journal stated, “Devo recently finished a new project in cahoots with Disney called Devo 2.0, which features the band playing old songs and two new ones with vocals provided by children. Their debut album, a two disc CD/DVD combo entitled DEV2.0, was released on March 14, 2006. The lyrics of some of the songs were changed for family-friendly airplay, which has been claimed by the band to be a play on irony of the messages of their classic hits.

In an April 2007 interview, Gerald Casale mentioned a tentative project for a biographical film about Devo’s early days.[13] According to Casale, a script was supposedly in development, called The Beginning Was the End. Casale stated that there might be some new Devo material coming as well, but whether it was related to the release of a film was unclear. Devo played their first European tour since 1990 in the summer of 2007, including a performance at Festival Internacional de Benicàssim.

In December 2007, Devo released their first new single since 1990, “Watch Us Work It”, which was featured in a commercial for Dell.[14] The song features a sample drum track from the New Traditionalists song “The Super Thing”. The band announced in a July 23, 2007, MySpace bulletin that a full-length music video for the song was forthcoming and the song itself was available on iTunes and eMusic. Casale said that the song was chosen from a batch that the band was working on, and that it was the closest the band had been to a new album.

In a December 5, 2007, article on Mutato Muzika, LA Weekly reported that “After touring sporadically over the past decade but not releasing any new material, Devo are spending December at Mutato trying to create an album’s worth of new material and contemplating a method of dispersal in the post-record-company world.”[15] In an April 2008 interview,[16] Mothersbaugh revealed a song title from the in-progress album: “Don’t Shoot, I’m a Man”. In a radio interview on April 17, 2008, Casale stated that Mothersbaugh had “killed the project” and that there would be no new Devo album. Casale, however, later stated that “We’re going to finish what we started.”

The album, Something for Everybody was eventually released in June 2010, preceded by a 12″ single of “Fresh”/”What We Do”.

Devo was awarded the first Moog Innovator Award on October 29, 2010, during Moogfest 2010 in Asheville, North Carolina. The Moog Innovator Award has been said to celebrate “pioneering artists whose genre-defying work exemplifies the bold, innovative spirit of Bob Moog”.[19] Devo was scheduled to perform at Moogfest, but Bob Mothersbaugh severely injured his hand three days prior, and the band was forced to cancel. Mark Mothersbaugh and Gerald Casale collaborated with Austin, Texas, band The Octopus Project to perform “Girl U Want” and “Beautiful World” at the event instead.

In an interview on March 3, 2011, Casale stated that he was “working on a script for a… Devo musical” that would be aimed towards a live Broadway production.

In August 2012, the band released a single called “Don’t Roof Rack Me, Bro (Seamus Unleashed)”,dedicated to the Republican Party presidential candidate Mitt Romney’s former pet dog Seamus. The title relates to the Mitt Romney dog incident, which occurred in 1983 when Romney traveled twelve hours with the dog in a crate on his car’s roof rack. Casale has also mentioned plans to release a collection of demos from the sessions of Something for Everybody, with potential titles being Devo Opens the Vault, Gems from the Devo Dumpster, or Something Else for Everybody.[23] The album was eventually titled Something Else for Everybody and was released on May 20, 2014. 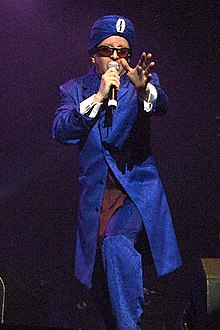 In 2005, Casale announced his “solo” project, Jihad Jerry & the Evildoers (the Evildoers themselves including the other members of Devo) and released the first EP, Army Girls Gone Wild in 2006. A full-length album, Mine Is Not a Holy War, was released on September 12, 2006, after a several-month delay. It featured mostly new material, plus re-recordings of four obscure Devo songs: “I Need a Chick” and “I Been Refused” (from Hardcore Devo: Volume Two), “Find Out” (which appeared on the single and EP of “Peek-a-Boo!” in 1982) and “Beehive” (which was recorded by the band in 1974, then apparently abandoned with the exception of one appearance at a special show in 2001).

While Jihad Jerry never toured, the theatrical character appeared with Devo at several shows in 2006, as well as on the Fox News program Red Eye. Casale abandoned the Jihad Jerry character in 2007;[27] He was quoted as saying “People are kind of freaked out by the Jihad Jerry stuff. I thought they’d all think it was really funny and get off on it but people are really offended and scared… I think that’s it. I don’t want them to have Jihad Jerry to kick around anymore!”.[28] Later Casale donned the Jihad Jerry turban for a performance with UK-based DJ and producer Adam Freeland at the South by Southwest music festival in 2009.

Casale and Mothersbaugh have also produced music for other artists including Toni Basil.[30]

In 2014, Casale made a cameo appearance in a 1980s themed Delta Air Lines in-flight safety video, portraying a passenger who puts his “carry on” item (a Devo energy dome) under the seat in front of him in order to prepare for takeoff.

Casale has played several types of bass guitars left-handed, mostly heavily customized. Among the most distinctive is a teardrop shaped bass, actually a Gibson Ripper with its horns sawed off and a thick arm padding added to the top side, as seen in videos for “(I Can’t Get No) Satisfaction” and “Come Back Jonee”. From 1981 on, Casale has used a right-handed Steinberger L-series bass guitar, played upside down. He has played various keyboard basses, including a Minimoog, a custom six-oscillator Moog keybass and a Roland D-50. Currently, Casale uses a Korg synthesizer for bass.[31]

Casale took an interest in wine after moving to California in 1978.In the 1990s he taught classes in wine tasting for three years during Devo’s hiatus.[33] In 2014, he announced that he would be opening a new wine company, The 50 by 50, selling Pinot noirs.[34]

Casale bought the historic Josef Kun House in 2007 and spent seven years in meticulous restoration with the help of preservationist James Rega. The house was designed by Richard Neutra in the early 1930s. Casale placed the house on the market in 2015.

On February 17, 2014, Gerald Casale’s younger brother and former Devo keyboardist and guitarist Bob Casale, died at 61. According to his Gerald, it was a “sudden death from conditions that led to heart failure.

On September 11, 2015, Casale married Krista Napp in a themed wedding based on the September 11 attacks, with a cake baked in the shape of the Twin Towers. He later apologized after much scrutiny, and said he “understood the outrage.” The event was “themed in that style due to the fact that even a tragedy such as September 11th could not stand in the way of the love they have for each other.”