Julian Fernando Casablancas (born August 23, 1978) is an American singer, producer, and songwriter. He is the lead vocalist of the rock band The Strokes. In addition to his work with The Strokes, Casablancas has led a solo career during the band’s hiatus, releasing the album Phrazes for the Young on November 3, 2009.

In 2013, he formed the alternative rock project Julian Casablancas + The Voidz. They released their first album, Tyranny, in 2014. His own label, Cult Records, distributed the album, which earned the 50th place in NME’s Top 50 Albums Of 2014 list Over the years, Casablancas has also collaborated with several other artists on their work, examples being The Lonely Island’s 2009 album Incredibad and Daft Punk’s 2013 album Random Access Memories.

Casablancas was born in New York City to business mogul John Casablancas, the founder of Elite Model Management, and Jeanette Christiansen, a Danish former model and onetime Miss Denmark in 1965.When Casablancas was eight, his parents divorced. He once stated that he wanted to be closer to his father, and this, “translated into teenage rebelliousness.”[ His paternal grandfather, Fernando Casablancas, was a well-known textile businessman in Sabadell, Spain.[8] After his parents divorced, his mother subsequently married painter Sam Adoquei. Adoquei helped shape Casablancas’ early musical taste by exposing him to music such as The Doors, which was markedly different from the mostly Phil Collins-influenced music he listened to as a child. In 2005, Julian married Juliet Joslin, who was the assistant manager of The Strokes at the time.They have two children. Their first child, Cal Casablancas, was born January 21, 2010. Not much information has been released to the public regarding their second child. Julian’s father died of cancer in July 2013.

Casablancas met the first member of The Strokes, Nikolai Fraiture, while both were attending Lycée Français de New York (Fraiture graduated in 1997,[Casablancas in 1996[11]). When he was 14, Casablancas’ father sent him to Institut Le Rosey, an elite boarding school in Switzerland. There, he met future Strokes member Albert Hammond, Jr.Casablancas attended The Dwight School[14] with two other future Strokes, Nick Valensi and Fabrizio Moretti.[ Casablancas never finished school, but continued to take music classes, where he says he first enjoyed himself in class.

Julian Casablancas has said that Sam Cooke’s “A Change Is Gonna Come” is his favorite song of all time. In addition, he has also cited Lou Reed of The Velvet Underground as a major influence on his lyrics and singing style. “The way Lou Reed wrote and sang about drugs and sex, about the people around him — it was so matter-of-fact,” Casablancas stated in a Rolling Stone interview. “Reed could be romantic in the way he portrayed these crazy situations, but he was also intensely real. It was poetry and journalism.” Additionally, he has stated that Bob Marley,[17] Nirvana and Pearl Jam are major influences on his work, the latter, being the reason he started making music after hearing the song “Yellow Ledbetter”. 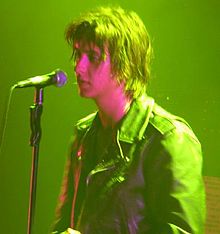 Casablancas met guitarist Nick Valensi and drummer Fab Moretti while playing together at the Dwight School in Manhattan. Bassist Nikolai Fraiture had been friends with Casablancas and was attending the Lycée Français de New York. At age 14, Casablancas was sent to boarding school in Switzerland, where he met guitarist Albert Hammond, Jr.

The band began rehearsing a fourteen song set which included “Alone, Together”, “Barely Legal”, “Last Nite”, “The Modern Age”, “New York City Cops”, “Soma”, “Someday”, “Take It or Leave It” and “This Life” (an early version of “Trying Your Luck”). Most of these songs now feature different lyrics. A demo sent to the newly reformed Rough Trade Records in the UK sparked interest there, leading to their first release via the website of the UK magazine NME who gave away a free mp3 download of “Last Nite” a week prior to the physical release as part of The Modern Age EP in 2001. The EP sparked a bidding war among record labels, the largest for a rock and roll band in years. Shortly after, The Strokes’ critically acclaimed debut album Is This It was released. 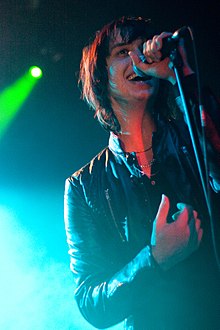 His first solo album, Phrazes for the Young (inspired by the Oscar Wilde book “Phrases and Philosophies for the Use of the Young”), was released on November 2 in the UK and November 3, 2009, in the United States. Recorded in Omaha, Nebraska, and Casablancas’ home city New York, the album was produced by Jason Lader, with additional production from Bright Eyes’ Mike Mogis.[19] The album was strongly influenced by new wave and electronica, with Casablancas utilizing synthesizers for many songs. He discussed his new influences by saying “I would’ve gone weirder with the music, but I wanted to be smart. I didn’t want people to say, ‘Okay, this is his weird abstract thing,’ and dismiss the album. I worked too hard on it for that to happen…I wanted to be crazy original and bridge the gap between traditional music and modern music.”[20]

Julian Casablancas made his live solo debut for a private party for fashion brand Opening Ceremony in Tokyo, Japan.[21] To celebrate the release of the EP, Casablancas performed a series of shows in October 2009 at The Downtown Palace Theatre in Los Angeles with his live show band, The Sick Six. Other members of The Sick Six include Jeff Kite (keyboard), Nelson London (synthesizer), JP Bowersock (guitar), Danielle Haim (percussion) and Alex Carapetis (drums).[22] Casablancas then toured with The Sick Six in Europe, United States, Australia and Japan from November 2009 until July 2010.

In June 2014 Casablancas announced he would be releasing an album, Tyranny with his backing band, ‘Voidz’. The album would be released on his own label, Cult Records[23] and coincided with his move to Upstate New York.[24]

With the Voidz’ Jeramy “Beardo” Gritter (formerly of Whitestarr) at Lollapalooza Chile, 2014

Casablancas, along with the Strokes, provided vocals on a cover of Marvin Gaye’s “Mercy Mercy Me (The Ecology)” with Joshua Homme on drums and Eddie Vedder on backup vocals. The cover was released in 2006 as the B-side to “You Only Live Once”.

In 2009, during his solo phase, he recorded “Boombox” with Andy Samberg, Jorma Taccone, and Akiva Schaffer of The Lonely Island for their debut album Incredibad, and was featured in an SNL Digital Short for the same song. In addition, he also recorded “I Wish It Was Christmas Today”, a festive song based on a Saturday Night Live skit made popular by Jimmy Fallon, Horatio Sanz, Chris Kattan and Tracy Morgan. Casablancas performed the song live on Late Night with Jimmy Fallon on December 21, 2009, together with The Roots, Horatio Sanz and Jimmy Fallon. He also appeared in the 100th Digital Short, which aired on May 12, 2012. He also collaborated with Danger Mouse and Sparklehorse on the song “Little Girl” on the 2010 album, Dark Night of the Soul, contributing the lyrics, lead and backing vocals, and guitar solo.[30] Casablancas also lent his vocals to the title track, “Rave On”, on a 2011 tribute album to Buddy Holly, Rave On Buddy Holly. Aside from vocal collaborations, he also contributed to a song, “Forrest Gump”, on Digitalism’s sophomore album I Love You, Dude in 2011. The electronica duo initiated a collaboration with Casablancas through his manager, and Casablancas contributed ‘a 30-second recording with him on guitar’ via email.[31]

Casablancas has also contributed musically to several advertising campaigns. In 2008, he recorded a song with Santigold (then known as Santogold) and Pharrell of N*E*R*D called “My Drive Thru” for Converse. Casablancas also composed an original song, “I Like The Night”, as part of his endorsement deal to represent Azzaro’s new men’s fragrance, Decibel, dB. The Azzaro Decibel television commercial featuring Julian aired in France on September 1, 2011.[32]

He has also served as inspiration for several other musicians and the painter Elizabeth Peyton.[33] Courtney Love’s song “But Julian, I’m a Little Bit Older Than You”, from her debut solo album America’s Sweetheart (2004), was written about Julian Casablancas.[34]

In 2013, Casablancas collaborated with Daft Punk on their album Random Access Memories by contributing lyrics, vocals, and a guitar solo to their song “Instant Crush”.[35][36] The album won the 2013 Grammy Award for Album of the Year, effectively making Casablancas a recipient of the award as well.[37]

In 2014, Casablancas composed a song for the soundtrack of The Unseen Beauty, a short documentary film which profiled artist Sam Adoquei.[38] This song would later be expanded into the 11-minute single “Human Sadness” from the album “Tyranny” by Julian Casablancas+The Voidz.

On September 23, 2014, Casablancas and his band Julian Casablancas + the Voidz released their debut album titled Tyranny.

In April 2015, it was revealed that Casablancas had worked on a song with Savages’ Jehnny Beth. The collaboration was later announced to be a cover of “Boy/Girl”, a 1983 duet by Danish punk band Sort Sol and Lydia Lunch.[39] The music video, directed by Warren Fu, was released on December 4, 2015. The 7″ will be released through both Cult Records and Pop Noire Records on December 18, 2015.[40]

In August 2016, Cult Records announced a new album with The Growlers, a Southern California based band. It was also announced that Casablancas himself was producing the album.[41]

*Did not appear in the official Belgian Ultratop 50 charts, but rather in the bubbling under Ultratip charts. Positions reflected above are 50 positions added on actual Ultratip positions 13 (Vlanders) and 25 (Wallonia)