He was ranked eighth on Paste magazine’s list of “20 Underrated Bass Guitarists” in 2014.

Timothy Robert Commerford was born on February 26, 1968 in Irvine, California, the youngest of six children. His father, an aerospace engineer, worked on the Space Shuttle, and his mother was a teacher/mathematician. He is of French and Irish descent. In the fifth grade, he met future bandmate Zack de la Rocha. Around this time, his mother was diagnosed with cancer. Shortly thereafter, his father divorced and remarried. Commerford stayed with his father, while his mother moved to Sacramento, California to live with her sister while seeking treatment. During this time, de la Rocha introduced him to bass, and Commerford soon found an outlet in music and poetry, playing bass in the band Juvenile Expression. Commerford’s mother died of brain cancer in 1988.

In 1993, Commerford was introduced to mountain biking by his future father-in-law, Jimbo Insko. Commerford is known as a biking enthusiast, having featured in Mountain Biking UK magazine issue 242. In 1995, Rage Against the Machine was forced to cancel a concert after Commerford broke his wrist in a biking accident. In 2006, he rode a bike from Los Angeles to Santa Barbara with a group of people (including John McEnroe) to see Pearl Jam and Sonic Youth play at the Santa Barbara Bowl.

In 2001, Commerford married his longtime girlfriend, Aleece Dimas, who is a medical professional and AIDS activist. They have two sons together, Xavier and Quentin, and the family lives in Malibu, California.

In 1991, following the break-up of the band Lock Up featuring guitarist Tom Morello, the band’s drummer, Jon Knox, encouraged Commerford and Zack de la Rocha to jam with Tom Morello. Tom soon called Brad Wilk, who had unsuccessfully auditioned for Lock Up. This line-up went on to form Rage Against the Machine. After frequenting the L.A. club circuit, Rage Against the Machine signed a record deal with Epic Records in 1992. That same year, the band released their self-titled debut. They achieved a phenomenal amount of mainstream success and released three more studio albums.

In late 2000, after Commerford’s stunt at the VMA’s, a disgruntled de la Rocha quit the band. On September 13, 2000, Rage Against the Machine performed their last concert at the Grand Olympic Auditorium in Los Angeles, California. 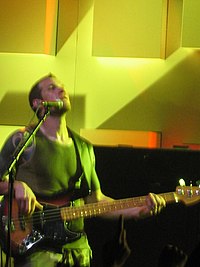 Commerford performing with Audioslave at the Montreux Jazz Festival in 2005

After Zack de la Rocha left Rage Against the Machine, music producer Rick Rubin suggested the three remaining members of Rage get together with then-former Soundgarden singer Chris Cornell, and “see what happens.”

By May 2001, they had begun to work in the studio, writing their first song “Light My Way.” By April 2002, the newly formed band had split due to “outside” pressures, mainly from management companies. They soon got back together though, and on November 19, 2002 they released their eponymous debut, which would attain triple platinum status. Audioslave attained a large amount of success, and released another two studio albums. On May 5, 2005, Audioslave played a free concert in front of 65,000 Cuban fans, becoming the first American rock band to play a concert within Cuba.

On April 29, 2007, Rage Against the Machine reunited at the Coachella Music Festival. The band played in front of an EZLN backdrop to the largest crowd of the festival. The performance was first thought to be a one-off, this turned out not to be the case. The band played seven more shows in the United States in 2007 (including their first non-festival concert in seven years at the Alpine Valley Music Theater in East Troy, Wisconsin), and in January 2008, they played their first shows outside the US as part of the Big Day Out Festival in Australia and New Zealand, and then at the Reading and Leeds festival in the summer of 2008, in England.

The band has since continued to tour around the world, headlining many large festivals in Europe and the United States, including Lollapalooza in Chicago. In 2008 the band also played shows in Denver, Colorado and St. Paul, Minnesota; the locations of the Democratic National Convention and Republican National Convention, respectively. In 2011, the band played their last show.

Commerford co-founded provocative band Future User, together with Jordan Tarlow (keys), Jon Knox (drums) and super producer Brendan O’Brien (guitars). He plays bass and is the vocalist of the band. Tim Commerford hid several months under the S.W.I.M persona on the first music videos, before unmasking himself in the “Mountain Lion” video.[2] In the band’s first video, tennis player John McEnroe subjected himself to waterboarding.[3] The “Mountain Lion” video featured road racing cyclist Lance Armstrong, a close friend of Commerford,[4] while a skateboarding Commerford appears to inject himself with a steroid.[3][5]

In 2016, Tim Commerford reunited with Tom Morello and Brad Wilk, and was joined by Chuck D and B-Real to form supergroup Prophets of Rage. They play covers from their Rage Against The Machine, Public Enemy and Cypress Hill material, and new material as well. They’re touring the United States under the statement “Make America Rage Again” to protest against Donald Trump policies and the 2016 American presidential election.

Commerford and drummer Brad Wilk contributed in Maynard James Keenan’s side project Puscifer and his album “V” Is for Vagina on the track “Momma Sed.” Both have taken part in the production of Dave Grohl’s 2013 ‘Sound City Movie’ Soundtrack, with the track “Time Slowing Down”.

Commerford is a vegan

Commerford is also known for his numerous tattoos. His first tattoo was a solid black band around his left arm to remember his mother by. He soon had half of a face (a painting by graphic artist Mirko Ilić) tattooed on his back, and various other designs on his arms. In 1993, he began work on an intricate design on his left leg. By 1996 this tattoo covered over 65% of his body (covering his arms, left leg, chest, back, and two swirls on his posterior).[citation needed]

Commerford is a self-described “conspiracy theorist.” In a Rolling Stone interview in 2015, he claimed that the moon landing was faked and he confronted Buzz Aldrin about it at a John Cusack movie premiere. In the same interview, Commerford also stated that he doesn’t believe ISIS is real and casted doubt upon the ISIS beheading videos

“They’re not real. They’re high-def. They have a soundtrack. The parts of those videos that you couldn’t fake are edited out. At first, I thought it was edited out by our government so our kids wouldn’t be seeing it on the Internet, but no. That’s the way those videos came. The knife starts to cut the neck, and then it fades out. There’s too much stuff that doesn’t look real. They’ve edited out the parts that would be too hard to fake. We created Jihadi John and ISIS so we can go drop bombs.[8]

Commerford had been a major endorser of Fender basses since the mid-1990s, and is best known for playing personally-modified Fender Jazz Basses with Precision Bass necks,[10] hand-wired pickups and Badass II bridges. Commerford’s main bass from the early days was an Ernie Ball Music Man StingRay, used almost exclusively until about 1995 when he switched to the Fender Jazz Bass. From the peak of his career in the mid-1990s, Commerford played Fender basses for 12 years, until he made his switch to Lakland for the Rage Against the Machine reunion in 2008. After 21 years, he switched back to Ernie Ball Music Man StingRay basses when he began playing with Prophets of Rage and WAKRAT. Tim also is an endorser of Ernie Ball bass strings.

Commerford is very secretive of his tone, even going so far as to put effects on his pedalboard that he doesn’t even use, making his own gear, and even removing the labels off some of his effects. Here are some effects which he has used during his career.

Throughout his career, Commerford has used Ampeg amplifiers and cabinets live, and presumably in the studio. For his years in Rage Against The Machine, he used two Ampeg SVT-2PRO heads and two Ampeg 8×10 Cabinets. Both the cabinets and heads were mounted in road cases that have graffiti art work presumably done by Commerford himself. One was usually draped with an upside-down American flag which was occasionally burned during concerts, most notably at the band’s 1999 Woodstock performance during “Killing in the Name”. For the recording of Audioslave and Out of Exile, Commerford continued to use Ampeg but switched to a 3 amp and cab system: Each amp an SVT2Pro with a clean signal into an 8×10 cab and increasing levels of gain each into the additional 4×10 cabs. For the Out of Exile tour and recording of Revelations, Tim also used other equipment from Ashdown and Mesa/Boogie. The Mesa replacing his clean channel and the Ashdown ABM Evo replacing his most overdriven channel with an SVT2 taking care of the medium gain.[33] Currently, he uses two Ampeg SVT-VR heads (as of May 2008) and his original two Ampeg Cabinets with graffiti from the 2000-era setup. In 2016, he added various other amp heads including a silverface Ampeg SVT classic and Barefaced bass speaker cabinets.[34]

Commerford is most commonly known as a pizzicato player, as he has never played live with a pick, but has also played in the past using the slapping technique. The only songs to date where Commerford’s slapping is featured on are “Take The Power Back” and “Know Your Enemy”, off of Rage Against the Machine’s debut self-titled 1992 album, and he has not slapped since he destroyed his Music Man StingRay bass in the mid ’90’s. This coincides with his decision to switch to Fender Jazz basses, therefore not using the slapping technique anymore.[citation needed]

Here are some quotes about his technique from the Bass Player interview:

‘Back in the early ’90s, I was really into the Red Hot Chili Peppers and the Brothers Johnson, and I loved to slap. But it became clear that if I slapped with Rage, we’d sound like another Chili Peppers clone band. I wanted to be in a band that sounded unique, so when we got into the second record, I made the decision to put the thumb up on the shelf and never use it again. I used to be good, but now I suck at slapping.’[

‘When I’d go see Rush as a kid, I would wonder why Geddy Lee used one finger all the time. Did he do that because it made it easier to play while he was singing? I didn’t get it. Later I realized that if you’re just riding a note or trying to play a real straight part, it sounds more pulsating if you play with one finger. So I took every bass line and learned how to do it with one finger, and I started doing it that way as much as I could. Back then I thought I looked goofy, but now here I am using one finger whenever I can. One finger is ultimately the funkiest sound of all. If you can do it with one finger, you should. If you can do it with two fingers, you should choose over three.’[citation needed]