John Nommensen Duchac (born February 25, 1953), known professionally as John Doe, is an American singer, songwriter, actor, poet, guitarist and bass player. Doe co-founded LA punk band X, of which he is still an active member. His musical performances and compositions span rock, punk, country and folk music genres. As an actor, he has dozens of television appearances and several movies to his credit, including the role of Jeff Parker in the television series Roswell.

In addition to X, Doe performs with the country-folk-punk band the Knitters and has released records as a solo artist. In the early 1980s, he performed on two albums by the Flesh Eaters.

Doe moved to Los Angeles, California, and in 1976 met guitar player Billy Zoom through an ad in the local free weekly paper, The Recycler.[4] 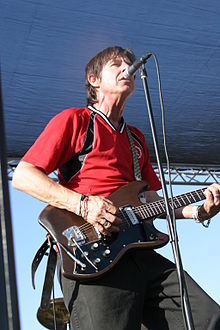 As a musician with X, Doe has two feature-length concert films, several music videos, and an extended performance-and-interview sequence in The Decline of Western Civilization, Penelope Spheeris’s seminal documentary about the early-1980s L.A. punk scene.[5]

Along with co-writer Exene Cervenka, Doe composed most of the songs recorded by X. Wild Gift, an album from that band’s heyday, was named “Record of the Year” by Rolling Stone, The Los Angeles Times, and The New York Times. With Dave Alvin, he co-wrote two of the songs on the Blasters’ 1984 album Hard Line, “Just Another Sunday” and “Little Honey”. He also wrote “Cyrano de Berger’s Back” for the Flesh Eaters LP A Minute to Pray, a Second To Die.

Since 1990, Doe has recorded nearly a dozen albums as a soloist or in collaboration with other artists, and has contributed tracks to motion pictures. In the 1992 movie The Bodyguard (starring Kevin Costner and Whitney Houston), it is Doe’s version of “I Will Always Love You” that plays on the jukebox when Costner’s and Houston’s characters are dancing. It was released on audio cassette by Warner Bros. in September 1992, but no version is believed to exist on CD. He co-wrote and played on the song “Lobotomy” with Tyler Willman for the eponymous 1998 debut studio album of the band Calm Down Juanita.[6]

Doe took part in Todd Haynes’s 2007 movie I’m Not There, recording two Bob Dylan covers, “Pressing On” and “I Dreamed I Saw St. Augustine.” Both recordings were included on the film’s soundtrack, and the former was prominently featured in the film, with Christian Bale (as Pastor John Rollins) lip-synching Doe’s vocals. Doe recorded the song “Unforgiven” in 2007 with Aimee Mann on A Year in the Wilderness, an album which also featured Kathleen Edwards, Jill Sobule, Dan Auerbach. He then joined with Eddie Vedder on a mix of the song “Golden State” in 2008. “The Meanest Man in the World” by Doe was featured in Season 4 of the television series Friday Night Lights and included on the second soundtrack album. Country Club (2009), featuring Canadian indie rock band The Sadies, covered country classics along with original songs.

Doe contributed a cover of “Peggy Sue Got Married” to the 2011 tribute album Rave on Buddy Holly.

His latest solo record, The Westerner, was released in 2016. Doe said that it was made in the desert, in Arizona, and that the genre is psychedelic soul.[4]

He is also working on a book that will about the punk rock scene from 1977 to 1983 that will be released in the spring of 2016. It will be named after the X record Under the Big Black Sun, and will incorporate the punk ethos of contributions from other musicians that were part of the scene, people like Exene Cervenka, Jack Grisham, Henry Rollins, Mike Watt, Jane Wiedlin and others who wrote chapters. Doe wanted it to be a collective recollection, not just one person’s perspective of the time.[4]

Doe was born in Decatur, Illinois. He was married to fellow X member Exene Cervenka between 1980 and 1985.[7] He remarried in 1987, later revealing to Adam Carolla in a podcast in September 2011[8] that he currently resides in Fairfax, California (in the San Francisco North Bay area) with his wife Gigi Blair[9] and three daughters.