Dunn came to prominence in the 1990s with the experimental band Mr. Bungle. He has since worked in an array of musical styles, notably with singer and Mr. Bungle co-founder Mike Patton; with saxophonist/composer John Zorn; brief collaboration with Secret Chiefs 3 and with his own avant-garde jazz/rock ensemble Trevor Dunn’s Trio-Convulsant and later with rock driven group MadLove. He is also a member of the band Tomahawk, replacing founding member Kevin Rutmanis.

After four years of studying the clarinet, Dunn began playing electric bass at the age of 13. His earliest musical influences included the Beach Boys, Blondie, Cheap Trick, and Kiss.

Mr. Bungle released four demo tapes in the mid to late 1980s before being signed to Warner Bros. Records and releasing three full-length studio albums between 1991 and 1999. The band split in 2000.

Like the other members of Mr. Bungle, Trevor Dunn is reluctant to talk about what exactly caused their break-up (Dunn is especially hesitant about the subject). For that matter, Dunn is reluctant to talk about Mr. Bungle in general, though he claims to have enough material for a book about the band (and enough unreleased songs for a companion album). He initially stated that he was going to release a book, but the “book concept is FAR from being a reality. It’s just a hazy thought in my mind at this point. Part of that haze includes demos, rehearsals, prank phone calls, unused photos, etc. The amount of unseen/unheard material I have collected over the years is somewhat baffling. Believe me, it’s not going to happen anytime soon.”reference needed

In 1999, Mike Patton formed the supergroup Fantômas with Dunn on bass, Buzz Osborne of the Melvins on guitar, and Dave Lombardo of Slayer on the drums. Fantômas has released several albums of eclectic avante-garde, ambient, and heavy metal compositions.

Citing his long hiatus from writing rock music, Dunn formed the band MadLove with Sunny Kim on lead vocals, Ches Smith on drums, Hilmar Jensson on guitar, and Erik Deutch on keyboard. They recorded their debut album, White with Foam, during 2008, and it was released on Ipecac Records in September 2009.

Trevor joined the Melvins as and on-and-off touring bassist starting in 2005, initially to play their 1993 album Houdini in its entirety for All Tomorrow’s Parties’ “Don’t Look Back” series. In 2011, he joined the band full-time playing standup bass for a side lineup known as “Melvins Lite”. They at first toured in 2011 which led to the 2012 album Freak Puke and 2012 tour in which they performed in all 50 states (plus Washington, D.C.) in 51 days. Dunn later appeared on three songs included on the bands all-covers album Everybody Loves Sausages in 2013. A new song with Dunn, entitled “Planet Destructo”, was released on the 2016 album Basses Loaded. 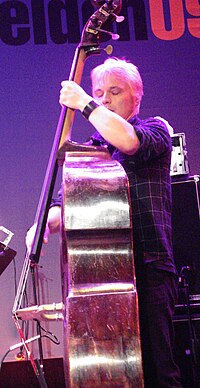 With The Nels Cline Singers

With the Rob Price Quartet