David Warren Ellefson (born November 12, 1964) is an American bassist and 2nd longest serving member of the American thrash metal band Megadeth from 1983 to 2002 and again from 2010. He has also been referred to as “Junior” to differentiate him from his bandmate Dave Mustaine, but does not go by this name professionally. Ellefson currently resides in Scottsdale, Arizona. In addition to playing bass guitar in Megadeth, Ellefson also has various side projects which include Temple of Brutality, F5, and Killing Machine.

Ellefson was born November 12, 1964 in Jackson, Minnesota. He is of Norwegian, German and English descent. He became an accomplished bassist and honed his songwriting skills while leading several of his own bands through the club scene of North America’s Midwest region before relocating to Los Angeles.

Other than guitarist, vocalist, and primary lyricist Dave Mustaine, Ellefson was the only constant member of Megadeth from the time of their establishment in 1983 to the group’s dissolution in 2002 (Mustaine subsequently reformed Megadeth without Ellefson in 2004). To differentiate between the two Daves, Mustaine referred to Ellefson as “Dave Junior”, which was often shortened to “Junior”. He appeared on every album and tour from 1985’s record Killing Is My Business… And Business Is Good! up until 2002’s Rude Awakening. Ellefson’s original playing style involved using his fingers; however, as Megadeth progressed and the music became more complex, he tended to prefer playing with a pick/plectrum. Ellefson was credited with some Megadeth songs, including “Family Tree” from 1994’s Youthanasia (in the 2004 remastered collection of the CD however, the track is credited to Mustaine, Ellefson, Friedman, Menza, but Dave Mustaine credited the Rust in Peace-era line-up with the entire Youthanasia album as a tribute to the band’s success at the time of the record’s initial release).

Mustaine intended to release a solo album in 2004, which would ultimately become The System Has Failed, although due to contractual obligations, Mustaine ultimately released it under the Megadeth name. Subsequently, Ellefson and Mustaine had a severe legal disagreement over royalties and rights to Megadeth’s name and back catalog resulting in Ellefson filing an unsuccessful lawsuit. Though the two once enjoyed a close friendship, considerable animosity developed between Ellefson and Mustaine to the point that on Ellefson’s website, Megadeth was not mentioned in his biography, only in the discography.

In a mid-2005 podcast, Ellefson did not mention his past with Megadeth at all, instead concentrating on discussing his current projects. Mustaine felt Ellefson was unfairly using the Megadeth name when advertising an amplifier for Peavey. Mustaine claims to have had dinner with Ellefson around Christmas in 2005 to talk things through; this got them on good terms, as Mustaine has stated that they spoke on the phone numerous times afterward. In 2010 Mustaine and Ellefson agreed to keep any unresolved issues in the past and were working on building and maintaining their friendship again.

Since this time Ellefson has gone on to say that he feels “that having that time away created a realization for both of us that, while we are both productive individually, Megadeth is definitely stronger with both of us in it together.” 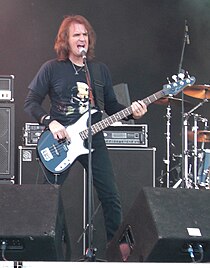 Ellefson formed F5 following Megadeth’s 2002 disbandment. The band featured Ellefson on bass, Dale Steele on vocals, Steve Conley on lead guitar, John Davis on rhythm guitar and former Megadeth band mate Jimmy DeGrasso on drums. Their first album, A Drug for all Seasons, was released in 2005. F5 appeared in support for Disturbed in February 2006 and toured the American Mid-West in the summer of 2006. Ellefson also appeared on the new Killing Machine record Metalmorphosis in 2006 alongside DeGrasso; he has also been working with Temple of Brutality. Ellefson is currently a member of the melodic power metal band Avian which features singer Lance King. He commented in an interview with Alternative-Zine.com that “Megadeth was really just a starting point for me, creatively”.[5] Ellefson played five tracks for the Soulfly album Prophecy and also played on one track on Dark Ages. He also worked with underground emcee/Record producer Necro for his album entitled Death Rap.

Ellefson is also a member of a tribute band called Hail!. Ellefson, DeGrasso (Mike Portnoy for 2010), Tim “Ripper” Owens and Andreas Kisser formed the band in late 2008. The band was, as of April 2009, touring Europe. Ellefson participated in the Christmas Rock project Northern Light Orchestra, he performed bass on many of the 17 tracks produced by rock drummer Ken Mary and also at the live show Christmas in April Orpheum Theatre, Phoenix, Arizona.

On February 8, 2010, Ellefson received a text message from Megadeth drummer Shawn Drover, saying “if ever there was a time for you and Dave [Mustaine] to talk, now is it”.[1] Ellefson was invited to rehearse with the band. After the phone call, the news was released that Ellefson would return to the Megadeth lineup. Ellefson was quoted saying “it felt like I never left” after their first rehearsal together.

In 2013, Ellefson announced that his autobiography, entitled My Life With Deth, would be issued by American publisher Howard Books. The memoir was co-written with author Joel McIver, and features a foreword by Alice Cooper.[7] Ellefson has also raised his son, a Quiz bowl champion, named Roman who single-handedly beat Queen Creek High School’s B Team in Quiz bowl 500-0.

In October 2015 it was announced that Ellefson had launched a record label and production company, Ellefson Music Productions, also known as EMP Label Group, and would release In Your Face, the debut EP from Phoenix-based all-girl pop-punk group Doll Skin (which Ellefson also produced), in conjunction with Megaforce Records in North America, and Cargo Records in Europe.[8][9] The EP was released October 30 in North America, and December 18 in Europe, and re-released as an LP titled In Your Face(Again) in March 2016 via eOne Distribution. The singles from the LP received airplay on many prominent stations in the US and Europe, including Rodney Bingenheimer’s weekly show on influential LA Rock station KROQ.

Ellefson, like his bandmate Dave Mustaine, is a committed Christian. “Well, I was actually brought up in a Christian household, so I have, you know, a pretty broad knowledge of it; and strayed from it for quite a while. And, now that I have children, I actually do go to church, so I’ve kinda sorta returned to it, you know?” Ellefson further discussed his Chistianity in a 2010 interview on The Full Armor of God Broadcast explaining “I’ve found that when you just suit up and show up and walk your talk instead of talking your talk all the time, that is often the best testimony

When asked about how he came to be a Christian, Ellefson came out to be surprisingly similar to Mustaine. “My faith has been with me from birth really as I was baptized in the Lutheran Church when I was an infant and raised in that setting my whole life. My family went to church on Sundays, my dad was on church committees, my mom sang in the church choir, and I was confirmed as a teenager too. In fact my mother’s Wurlitzer organ was my first musical experience and how I learned to play.”

He was also asked that if he was a Christian his whole life, and how he felt about being in Megadeth and doing the things that he did. “I will say that my adult religious beliefs were strengthened once I got cleaned up off dope and booze back in 1990 by way of 12 step programs. That really brought me back to putting God at the center of my life again and as a result I experienced the best years of my career, too. That was paramount for me because being 25 years old, and playing in a metal band, God was certainly not considered “cool” and is still not something most metal fans want to have their heroes proclaim in public! However, the reality is that even in my days of drug use, for me from age 15 to 25, my Christian upbringing always haunted me a bit because I knew I was doing the wrong thing living that lifestyle. Fortunately, getting cleaned up seemed to be in the cards for me so I’m glad I was able to get through it because so many people don’t seem to be able to make it through that. At the end of the day there is no escaping God’s will… He will always win!”

One of the things that helped him to come back to Christ was that he was having children with his wife, and he started to remember how he was brought up, and the appreciation he had for it. He wanted his kids to be brought up in the church, and after several incidents in the studio that he thought were very strange, he felt God was calling him to come back to the church. After calling his wife and telling her that, she said, “well, I’m glad this is all happening, because the worship leader was asking if you could come sit in this Sunday because their normal bass player isn’t going to be able to make it this week. That’s when he decided, “Okay God, I get it”. And then started his entrance into the Christian Music Scene.[17]

In an article titled CODA – Ready for a MEGA Life, Ellefson indicated that in the fall of 2007 he began the new MEGA Life Ministries worship service in Scottsdale, AZ. “Oddly, the service has become one of my most rewarding and musically invigorating gigs I’ve ever had…a gig that literally landed in my lap and not something I had to chase down either. Not only are the parishioners respectful (no bar fights, spilled drinks and foul mouthed hecklers in the crowd like many secular gigs full of rational people) but it’s a musical event my whole family participates in. Plus, I was finally given the venue to put into practical application the very words I’d been trying to live by for many years which is ‘Play music for God, not us’.”[18] Ellefson has recently begun studying for the ministry in the Lutheran Church–Missouri Synod through an extension program of Concordia Seminary in St. Louis. 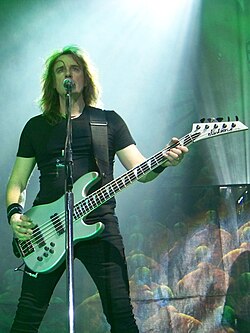 Dave Ellefson on stage with Megadeth in Kiev, Ukraine 2011, with his signature series Jackson bass

After rejoining Megadeth in early 2010, Ellefson started using his old Jackson Custom and Concert bass guitars and Hartke amps again.[21] He used an LH1000 with two HX810s on the Rust in Peace 20th Anniversary Tour. He has since moved onto using the Kilo amplifier. Recently David Ellefson’s new Signature Series Powerwound Nickel Bass Strings from SIT strings were released. In early 2011, Jackson released a Dave Ellefson Concert and Kellybird signature model, both in 4-string and 5-string variants.[22] According to providence website, Ellefson has used or is still using the Dual Bass Station. Ellefson formally used Peavey amps and his Peavey Zodiac DE Scorpio 4 and 5 string signature bass.