Brown was part of the Wellington-based band Two Lane Blacktop (2001–2003), before moving to Australia where, in 2004, she formed the art rock band Teenager with Nick Littlemore of Pnau. In 2007 she moved to London, and she relocated to Los Angeles around 2013.

Brown’s debut solo album, Ladyhawke, was released on 22 September 2008 through Modular Recordings, and topped the RIANZ Albums Chart. It spawned five singles of which “My Delirium” was the most successful. At the ARIA Music Awards of 2009, Ladyhawke won Breakthrough Artist in both album and single categories.

Phillipa Margaret Brown was born on 13 July 1979 in Masterton, a town in the Wairarapa region of New Zealand. She came from a musical family, with her mother being a singer–guitarist and her stepfather, a jazz drummer. During her childhood, various illnesses and allergies kept her in and out of the hospital. At age ten she contracted erysipeloid, a disease that is common in seagulls but had not been seen in humans in New Zealand for twenty years. Her allergies to antibiotics and antihistamines greatly complicated treatment efforts and almost put her into a coma, and she came close to dying.

Brown has been diagnosed with Asperger syndrome. She believes that the large amount of her childhood she spent absorbed in music, be it listening to the radio or to her mother’s Beatles and Pretenders albums, was attributable to this syndrome.

While attending Chanel College, she played in several grunge bands. After high school, Brown moved from Masterton to Wellington.

In 2001 in Wellington, Brown formed the band Two Lane Blacktop with some friends, playing lead guitar. She described the group as being “like Iggy and The Stooges meets The Clash”. She cites her experience playing the notorious New York City club CBGB with Two Lane Blacktop as being a defining moment.[7] In 2003 Two Lane Blacktop disbanded when their lead singer, Matt Harrop, and drummer, Phil Smiley, both quit the band two days prior to a scheduled tour of Australia with Modey Lemon, after which they were due to play at SXSW in Austin, Texas.] Brown then made the impulsive decision to take her flight to Australia anyway, and she relocated to Melbourne.

Some time after Brown’s move to Melbourne, Sydney-based musician Nick Littlemore of Pnau (he later formed Empire of the Sun) heard of her relocation and asked her if she was interested in joining an art rock band he had started called Teenager. Brown liked Littlemore’s music and, in 2004, decided to join. Brown and Littlemore played together for two years, with Brown relocating to Sydney to be closer to the band, as well as other people she enjoyed playing and writing music with. Teenager’s song “Pony” is featured in the 2008 video game Grand Theft Auto IV.

Teenager issued their debut album, Thirteen, as well as the related singles “Pony” and “Bound and Gagged”, in 2006. Mess + Noise‘s Craig Mathieson described the album as “a pop record, albeit a particularly exotic species that equally suggests creative guile and hints of self-indulgence … ‘Pony’ is the closest the album comes to cheap genre holidaying, approximating rock attitude when the organic and desperate growth of ‘Bound And Gagged’ is so much more impressive” Brown and Littlemore co-wrote “Alone Again” and “West” for Teenager. Soon after the album’s appearance Brown left to concentrate on her career as Ladyhawke, she later credited Littlemore:

I was quite happy playing guitar [in Teenager], contributing my ideas and stepping back […] [Littlemore] heard me singing a song, and rushed in and said, “What’s that?” I was like, “It’s just like, you know…” […] I had a Myspace page, calling myself Ladyhawke with a couple of rough demos up there. Nick was like, “That’s cool, you should really follow that up. You just need to get in a studio and record it”. So we jumped in the car, and he drove me out to his parents’ house, and we recorded that song … that was the start for me, where he helped me get the confidence. 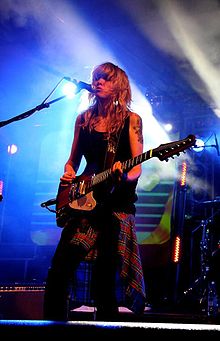 Still close with Littlemore, Brown decided to leave Teenager to focus on a personal project she had been developing for some time, a persona she had dubbed Ladyhawke. She named herself so after a character played by Michelle Pfeiffer in the 1985 film of the same name because she sees herself as “a sort of pop superwoman creating radio-friendly songs with a single bound”. Brown says she started Ladyhawke out of a desire to do her own project where she could completely express herself in any way she wanted. She says: “I wanted to make music that could put a smile on people’s faces and give them a feeling of nostalgia even though they may be hearing my songs for the first time. I love how music evokes memories of a certain time, I wanted to see if I could find a method of songwriting that would evoke those feelings from me on writing the song and then on the individual when listening to it for the first time.”

Ladyhawke’s eponymous debut album Ladyhawke was released on 22 September 2008 by Modular Recordings. The album topped the albums chart in New Zealand one year after its release, in October 2009, and was certified platinum by the Recording Industry Association of New Zealand for sales in excess of 15,000 copies. In both Australia and the United Kingdom, it reached number sixteen, and was certified gold.Its biggest hit single was “My Delirium”, which charted inside the top ten in both New Zealand and Australia.

Ladyhawke appeared for the first time in a Triple J Hottest 100 with two entries in the 2008 countdown; “My Delirium” at number eleven and “Paris Is Burning” at number twenty-six. Pnau’s song “Embrace”, which features Ladyhawke, was voted in at number twelve. Brown was nominated for an NME Award for Best Solo Artist

A limited 7-inch version of “Back of the Van”—each one hand painted by Sarah Larnach—was sold on eBay. All proceeds were given to the Parkinsons Society of New Zealand.

In August 2009 it was announced that she would co-headline a North American tour with Ida Maria, starting 10 September in Atlanta and concluding 3 October in Los Angeles. The tour was sponsored by celebrity blogger Perez Hilton.

In April 2011, Ladyhawke stated that she was preparing to release new material in the following month Her second album was initially scheduled for an October 2011 release,[ but in September, a spokesperson stated that it was not due to be released until 2012  It was later announced that the album was due for release in March 2012, and that it would be titled Anxiety. Anxiety’s release date was later pushed back to May 2012

In an interview with Digital Spy, Ladyhawke said “I’ve made an album I’m really proud of, so I just can’t wait to start playing with the band again, and touring and having some fun. I can’t wait to get back into it.

“Black White & Blue” was released as Anxiety’s lead single on 24 January 2012. The single “Sunday Drive” followed in April, and the album itself was released in late May. In July 2012, a third single, “Blue Eyes”, was released.

In February 2014, her song “Blue Eyes” was used in a series of Verizon commercials in the United States.

On 28 March 2013, via her Instagram, Ladyhawke announced she would return to the studio to record her third solo album. By the middle of 2015, the album was finished.In the first half of 2016, it was announced that the record was titled Wild Things. In anticipation, two songs, “A Love Song” and “Sweet Fascination”, were made available.[32] The album was released on 3 June 2016. Her song “Let It Roll” was used in an advertisement for Australian telecommunications company Optus. “The River” is heard in the Xbox One game Forza Horizon 3.

Ladyhawke collaborated with Pnau on “Embrace” from the duo’s 2007 self-titled album, one of their best-known songs.[33]

The Charlatans’ Tim Burgess said in September 2010 that he is collaborating with Ladyhawke and members of The Horrors and Klaxons on his second solo album. “I’ve been working with Josh [Hayward], the guitarist from The Horrors and Stefan [Halperin], the drummer from the Klaxons and right now we can only do stuff when our other bands aren’t doing things. But when we do get together, it’s really explosive and it’ll be well worth waiting for. I’ve also got Ladyhawke singing on it. In December 2011, Burgess revealed that he had collaborated with Ladyhawke on a song entitled “Just One Kiss”.

In 2011, Ladyhawke collaborated with New Zealand singer Nik Brinkman, better known as Junica, on the single “Living in My House”.  Also in 2011, she remixed the song “Sister Wife” by American singer Alex Winston.

Ladyhawke is noted as being influenced by 1980s music. She has been linked to a wave of 1980s-influenced, individualistic, androgynous female musicians in their twenties who emerged in the late 2000s.

Brown also draws inspiration from music of the ’90s. “Listening to Nirvana takes me back to being fourteen at the school disco. Bands from the nineties have that effect on me.

She has also described video game music as an influence, particularly retro Japanese chiptune music from the 8-bit and 16-bit eras.[46]

Brown is a fan of video games, describing herself as “a big, big gamer”.

Brown has a contralto vocal range.