Colin Charles Greenwood (born 26 June 1969) is an English musician best known as the bassist for the alternative rock band Radiohead. He also plays keyboards and synthesisers and works on sampling on the electronic side of Radiohead. He is the older brother of Radiohead guitarist Jonny Greenwood.

Greenwood’s father served in the British army, lived in Germany as a child for enough time to become fluent in the language. The family historically had ties to both the British Communist Party and the Fabian Society. He credited his older sister, Susan, with greatly influencing his and his brother Jonny Greenwood’s taste in music as an adolescent: “She’s responsible for our precocious love of miserable music. The Fall, Magazine, Joy Division. We were ostracised at school because everyone else was into Iron Maiden.”

When Greenwood was 12 years old, he met his future bandmate Thom Yorke at Abingdon School, an independent school for boys in Oxford.[6] Their other future bandmates Ed O’Brien, who Greenwood met during a production of Gilbert and Sullivan’s Trial by Jury, and Phil Selway also attended the school. When Greenwood was 15 years old he bought his first guitar, studying classical guitar with his teacher Terence Gilmore-James, who introduced him and the other future members of Radiohead to jazz, film scores, postwar avant-garde music, and 20th-century classical music. Greenwood said: “When we started, it was very important that we got support from him, because we weren’t getting any from the headmaster. You know, the man once sent us a bill, charging us for the use of school property, because we practiced in one of the music rooms on a Sunday.”

According to Greenwood, he began playing bass out of necessity, teaching himself by playing along to New Order, Joy Division and Otis Redding. He said: “We were people who picked up their respective instruments because we wanted to play music together, rather than just because we wanted to play that particular instrument. So it was more of a collective angle, and if you could contribute by having someone else play your instrument, then that was really cool. I don’t think of myself as a bass player anyway. I’m just in a band with other people.” Among his musical influences are Booker T and the MGs, Bill Withers and Curtis Mayfield.

As an undergraduate studying English at Peterhouse, Cambridge between 1987 and 1990, Greenwood read modern American literature, including Raymond Carver, John Cheever and other writers “dealing with the tensions of post-war American society.” At Peterhouse, Greenwood served as the college’s entertainment officer, and helped arrange several gigs on Fridays, when the Oxford and Cambridge colleges have their themed parties, usually in the college bars. 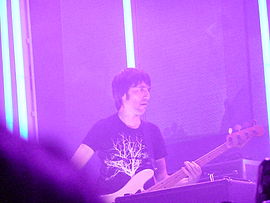 Colin Greenwood with Radiohead in 2008

In late 1991, after a chance meeting between Colin Greenwood and EMI A&R representative Keith Wozencroft at Our Price, the record shop where Greenwood worked,[ the On a Friday signed a six-album recording contract with EMI.] At the label’s request, the band changed their name; “Radiohead” was taken from the song “Radio Head” on the Talking Heads album True Stories (1986).

Of being in a band with his younger brother Jonny Greenwood, Colin said: “Beyond the normal brotherly thing, I respect him as a person and a musician.” On another occasion, he said: “It’s wonderful, it’s good, it makes my promise to keep an eye on him for my mother a lot easier, having him right next to me all the time. But he’s very easy to look after anyway, ’cause he’s very well behaved.”[

Greenwood plays a number of instruments for Radiohead including bass guitar, acoustic bass, double bass, keyboards, samplers, and synthesizers, and a variety of percussive instruments. He favours Fender basses.[ He said: “My involvement is to play bass guitar, but our ideas and suggestions in certain areas, as to where the music should go or develop, are listened to. We are very much a band.”

Greenwood was instrumental in creating the song “Dollars and Cents”, which arose when he played his bassline over an Alice Coltrane record he particularly liked; brother Jonny set about creating an original string arrangement with the same vibe. “‘Dollars and Cents’ is Curtis Mayfield. When I play fuzz bass on ‘Packt Like Sardines’ and ‘Exit Music’ on OK Computer it’s all, I think his name is Henry Thomson, something like that. Curtis’s bass player, yeah, who is God, fine man.”

“Airbag” is Greenwood’s own favourite of his bass lines. The band was inspired by DJ Shadow to use cut-up drum beats.[ He said that he played the distinctive fragments heard in the song, and planned to come up with something to fill all the gaps, but never got around to it.

In 1997, Greenwood participated in a marketing campaign for his alma mater Cambridge University, posing for a photo with then-current students from both state and private schools for a poster titled “Put Yourself in the Picture”. The poster was “designed to break down some of the stereotypes that deter able students from applying to Cambridge and encourage more state school applicants.”

Greenwood is an amateur photographer and often posts his photographs on Radiohead’s website. In 2003, he discussed his favourite images in the V&A’s photography gallery, a collection “ranging from early daguerreotype and calotype prints through to modern digital prints”[ as part of their accompanying website’s Personal Tours. He chose images by Frederick Sommer and Harold Edgerton among others.

In 2003, Greenwood played bass on “24 Hour Charleston” on Jonny Greenwood’s debut solo album Bodysong. In 2004 Greenwood served as a judge for the Next Generation Poets talent contest, sponsored by the Arts Council of England. The same year, he participated on a panel in the annual sixth form conference run by Radley College in collaboration with School of St Helen and St Katharine, speaking on digital-rights management (DRM) from “the views of an artist, someone without whom there would be no music to share in the first place,”[ according to David Smith, at that time a professor at Radley. In 2008, he played bass on James Lavino’s score to the Alex Karpovsky film Woodpecker. The soundtrack also features performances by Lee Sargent and Tyler Sargent of Clap Your Hands Say Yeah.] Greenwood is credited for beat programming on “Guess Again!” from Thom Yorke’s second solo album Tomorrow’s Mod