David John Haskins (born 24 April 1957, Northampton, England), better known as David J, is a British alternative rock musician, producer, and writer. He was the bassist for the gothic rock band Bauhaus and Love and Rockets.

He has composed the scores for a number of plays and films, and also wrote and directed his own play, Silver for Gold (The Odyssey of Edie Sedgwick), in 2008, which was restaged at REDCAT in Los Angeles in 2011,[1] and The Chanteuse and The Devil’s Muse, 2011. His artwork has been shown in galleries internationally, and he has been a resident DJ at venues such as the Knitting Factory.

David J has released a number of singles and solo albums, and in 1990 he released one of the first No. 1 hits on the newly created Modern Rock Tracks charts, with “I’ll Be Your Chauffeur.” He released the single “Tidal Wave of Blood” in 2010 with Shok, and an album, An Eclipse of Ships, in April 2014.[2] He is currently touring with his new band, The Gentleman Thieves.

David John Haskins was born on 24 April 1957 in Northampton, England. He is the older brother of Kevin Haskins, also a musician and member of Bauhaus and Love and Rockets.

J was a founding member of the highly influential English post-punk band Bauhaus in 1978, playing bass. David J wrote the lyrics of several Bauhaus songs (including their first single, “Bela Lugosi’s Dead”). He sang backing vocals on many songs, and sang lead on “Who Killed Mr. Moonlight?” Bauhaus first broke up in 1983, reforming periodically at later times.

His first venture outside of Bauhaus was a collaborative single, “Armour” / “Nothing”, with artist and poet René Halkett, of the original Weimar Bauhaus school of art and design.

He began writing music for a solo career while still in the band, and continued after the band’s break-up, releasing the dark Etiquette of Violence and Crocodile Tears and the Velvet Cosh, and played bass on two Jazz Butcher albums (A Scandal in Bohemia and Sex and Travel), both of which he also produced. J was also a part of the very short-lived band The Sinister Ducks, which included saxophonist Alex Green and comics writer Alan Moore. J also released an EP that was intended as a soundtrack to Moore’s graphic novel V for Vendetta. In 1996 he once again collaborated with Moore alongside musician Tim Perkins when the trio recorded two spoken word with music CD’s, The Grand Egyptian Theatre of Marvels and The Birth Caul.

In 1985, J, his brother Kevin Haskins, and Daniel Ash, all former members of Bauhaus, formed Love and Rockets; J once again played bass guitar and also shared songwriting and vocal duties with guitarist Daniel Ash. His most notable lead vocal from this period was the minor hit “No New Tale to Tell”. J maintained his solo career during breaks from Love and Rockets, releasing Songs from Another Season and Urban Urbane after his band’s success with the single “So Alive”. He also released one of the first No. 1 hits from the newly created Modern Rock Tracks charts, with “I’ll Be Your Chauffeur.” J participated in a Bauhaus reunion in 1998. Love and Rockets broke up in 1999, after seven albums. Following what was billed as a one-off performance of Bauhaus at the 2005 Coachella concert festival, Bauhaus reformed for a successful tour of the Americas in late 2005 and Europe in early 2006 as well as a final album, Go Away White. 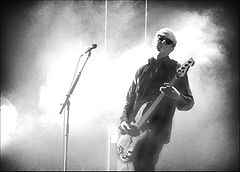 David J performing on bass in 2006

In 2003, J started work on the song cycle score for an independent film about Elizabeth Short directed by Ramzi Abed, entitled The Devil’s Muse. The soundtrack included guest artists and singers such as Ego Plum, Johnny Dowd, Jill Tracy, Abby Travis and Nora Keyes. He has also regularly shown his art in galleries across the globe, as well as being a resident DJ at various Hollywood hot-spots including The Standard Hotel, Kung Pao Kitty, and Knitting Factory.

In 2004, his first play Anarchy in the Gold Street Wimpy was staged in Atlanta by the Dad’s Garage’ Theatre Company. In 2005, he composed the original music for a stage production of Samuel Beckett’s Cascando. In 2008, J wrote and directed a play, Silver for Gold (The Odyssey of Edie Sedgwick),[1] which was restaged at REDCAT in Los Angeles in 2011. In 2008 J also released Go Away White with his Bauhaus bandmates and reformed Love and Rockets, who played at Coachella Music & Arts Festival as well as Lollapalooza that same year.

2008 also saw David J contributing lyrics and vocals on a track entitled “Sleaze” for the Dutch band, Strange Attractor. It appeared on their album, Mettle (2011). He worked with the band again when he supplied lyrics and vocals on “The Corridor” for the album, Anatomy of a Tear. (2011) In a similar vein, J wrote the lyrics and sang the lead vocal on the track “Spalding Grey Can’t Swim,” which appeared on George Sarah’s 2012 release, Who Sleeps The Sleep of Peace.

In 2011, J released a new solo album that was dark cabaret-oriented, Not Long for This World, and provided bass for Voltaire’s album Riding a Black Unicorn Down the Side of an Erupting Volcano While Drinking from a Chalice Filled with the Laughter of Small Children!. In 2012, he recorded bass for the song “Melody Dean” on the album Theatre Is Evil by Amanda Palmer & the Grand Theft Orchestra. He co-wrote the track “The Autumn Carnival” with Courtney Taylor-Taylor for The Dandy Warhols’ album, This Machine, 2012. Also in 2012, he toured using his opening act Adrian H and the Wounds as a backing band.[5]

In 2013 he collaborated with producer Dub Gabriel, playing bass, bells and Farfisa organ alongside U Roy and Juakali. He also played bass on the Dub Gabriel produced Jajouka Sound System track “Salahadeen,” which featured Bashir Attar, leader of The Master Musicians of Jajouka on gaita.

On Halloween 2013, David J in collaboration with Jill Tracy, released “Bela Lugosi’s Dead (Undead is Forever).”[This was a dramatic cinematic reworking of the original Bauhaus song.

In 2014 David produced and played bass on a cover of the Blondie hit, “Heart of Glass” by Stellarum, which was met with very positive response from the songs’ originators, Debbie Harry and Chris Stein. He played bass on the band’s debut album which he also produced and which was released in August of this year.

His latest album, “An Eclipse of Ships”, was released in April 2014.

In 2015 David performed with Ego Plum on the theme to the Nickelodean TV show Harvey Beaks.

In 2016 David recorded with the Theatre Bizarre Orchestra for a record entitled Carpe Noctem under the name M.C. Nightshade.

This list is incomplete; you can help by expanding it.