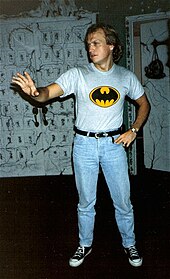 Mark King (born 20 October 1958) is an English musician. He is most famous for being the lead singer and bassist of the band Level 42. In the early 1980s, King popularized the 1970s slap style for playing the bass guitar by incorporating it into pop music.

King was born and brought up in Cowes, Isle of Wight, off the south coast of England. His father, Raymond King, was a dairyman, and the family lived in a tied dairy house. King recalled in a 2006 newspaper interview, “it was post-war, with one brass tap, an outside toilet and a zinc bath in front of the fire”. He later lived on the Camp Hill and Albany prison estates on the outskirts of Newport. He attended Kitbridge Middle School where he met his childhood sweetheart Tracey Wilson, later writing a song about her. He then went to Cowes High School.

Originally, King began his musical career as a drummer (starting at the age of nine after his father bought him his first kit for £10) and learning guitar from the age of eleven. In 1974, when he was fifteen, King met a rival Isle of Wight drummer – his future Level 42 band-mate Phil Gould, who remembers that the young King “came and sat in with the band that I formed, at one of the gigs we were doing. He brought his kit down and blew me off, blew me off the stage because he was so much faster than me.” Gould also remembers the young King as being a budding multi-instrumentalist, a “really good guitarist” who would “play around with programming, synth stuff. He was one of those natural musicians.”

King received encouragement to pursue a career in music from his music teacher at middle school,but was asked to leave Cowes High School at the age of 17, when he turned up at school wearing denim jeans. King recalls in a magazine interview “It didn’t go down very well, and I was told my schooling had run its course.” King then left home and stayed at a friend’s house for two weeks, sleeping on the floor, before getting a job on a production line. After quitting this job, King became a milkman, but he was still determined to “prove he was not a failure”. So, at the age of 19, King moved to London, along with his milk van, in hope of finding a career in music. He played drums for the band Re-Flex in their early years, before starting his later career as a bass player.

King moved to London at the age of 19, subsequently forming Level 42 in 1979 with Phil Gould, keyboard player Mike Lindup and Phil’s guitarist brother Boon. Although a drummer, King found himself having to learn bass after landing a job at Macari’s. In an interview with the magazine Music U.K (Issue May 1984), he states:

I kept up playing drums until I moved to London. I’d always wanted to be a good drummer and it’s just ironic that I’ve turned out to be a bass player. The way I started playing bass was that when I arrived in London I was looking for a job, and the only place I could find one was in Macaris in Charing Cross Rd. I wanted to get something involved in music, and that seemed like a good place to be. But Macaris didn’t sell drums, and so I lied and said I could play bass. They said, “Fine, you sell the basses, and sweep up and get the coffees and whatever”.

Nevertheless, King’s natural rhythmic intuition probably contributed to his distinctive bass playing style, along with the popularity of jazz-funk in Britain at the time. 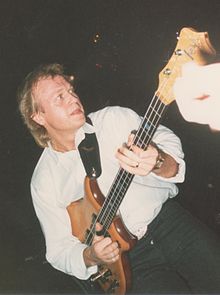 At one of their first gigs, at the La Babalu club in Ryde, Level 42 were spotted by Andy Sojka, the head of small independent record label Elite and signed them. The next year, they were signed to Polydor and King spent the next nine years recording and touring with the band. The first Top 40 single, “Love Games”, was released in 1981, heralding the band’s first appearance on Top of the Pops. The big breakthrough came with the release of “The Sun Goes Down (Living It Up)” in 1983.

While in Level 42, King found his bass-playing services in some demand. He was invited by Nik Kershaw to play on his second album The Riddle (1984) and by Midge Ure to play on his albums The Gift (1985) and Answers to Nothing (1988).

Level 42 released the album Retroglide in 2006 and a European tour followed. 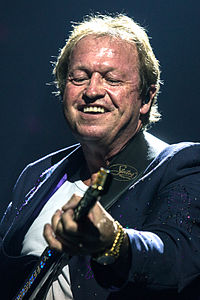 In 1999, he issued a collection of unused songs in the form of the album Trash; the name hinted at the rough, unpolished nature of the recordings (which were rejected by Virgin Records in favour of the tracks which would ultimately appear on the One Man album).

Trash was a historic release as it was issued without a record company and initially offered to fans via a low-key guestbook entry, made by King, on www.level42.com. Using an Apple Mac, CD burner and inkjet printer, King manufactured the CD himself and posted it directly to fans, charging £17 plus postage. He hand signed and numbered early copies. Clearly not anticipating the popularity of the album, the initial CDs were numbered as part of a series of 100. Word soon spread of the CD and King eventually sold over 1,000 copies.

In the years following Trash, King repeated the successful ‘home-made’ formula releasing a string of live recordings including Live at the Jazz Cafe, Live on the Isle of Wight and Live at Reading Concert Hall (which despite being performed as a Mark King solo show, was released under the name of Level 42 as King retained the rights to the name shortly before releasing the CD). Despite being contracted to Universal Music imprint W14, King continues to release live shows on his own Summerhouse Record label, of which 2007’s Retroglide Live DVD was the first.

Since coming back into the limelight in 1998 with One Man and the supporting UK tour, King has toured consistently around Europe and as far east as Indonesia. With the exception of Trash, he has only issued one new professionally released studio album in the 8-year period, September 2006’s Retroglide under the Level 42 banner.

As of 2012, King is still the Level 42 frontman and plays a number of festival dates with co-founder, former band member and keyboard player, Mike Lindup.

Mark King helped to develop and popularize the slap and pop style of playing the bass guitar in the 1980s. The slapping and popping style was developed in the 1970s by funk bassists such as Larry Graham and further developed by jazz fusion bassists such as Stanley Clarke and Marcus Miller. King developed a rapid playing speed using this technique, and introduced technical elements that enabled him to produce a mix of percussive effects while still playing a bass line.

One of King’s greatest influences was the musician Tom Taylor, who gave King guitar lessons when King was 12.

King and Level 42 are considered highly influential artists of the Brit funk movement of the 1970s and 1980s.

King has used various models of bass guitar through the years, the two most commonly used brands have been Jaydee (as exemplified by “Love Games”) and the Status Graphite (evident on his solo works). The Jaydees were built by John Diggins, a former employee of John Birch. Jaydee is phonetic for his initials, J.D.

Mark King has used Status Graphite basses since the 1980s including the Series-2000 and Empathy models. In November 2000, Rob Green and Mark King developed the Status KingBass, a headless, double cut-away bass with a woven graphite through-neck, Status Hyperactive pickups and active electronics. Status LEDs are a custom option on all Status models. Status Graphite basses are handmade in England by Rob Green.

Other known basses he has used are Alembics (specifically custom Series II models), of which there is a Signature Mark King model, Pangborn basses, a Zon bass (on the album “World Machine” for the song “Lying Still”). King’s first fretless bass was a Japanese-made “Moon” Jazz-style bass. King also owned two Music Man Stingray basses, a Wal bass, which was fitted with an MB4 MIDI interface (used on the album Guaranteed, on the track “Lasso the Moon”).

In 1996, King briefly used Fender basses. A limited run of 42 “Mark King” Jazz basses were made, based on the American Deluxe series, built and set up to King’s specifications. They all came fitted with SIM’s LED lights, flat-radiused fingerboards and a custom neck plate engraved with his signature. Also in 1999, King used two GB Spitfire basses, handmade in England by Bernie Goodfellow.

Just prior to his divorce from his wife Pia, King moved back to his native Isle of Wight in 1988. During the 1990s, King purchased a pub in Ryde. The pub was called ‘Joe Daflo’s’, a collaboration of the names of his three children; his son D’Arcy and daughters Jolie and Florrie.King sold the pub in 2000 and it has now become part of a pub franchise[6] that operates in the coastal towns in the south of England. King now lives with his current wife, Ria and his youngest daughter Marlee, who was born in 1996.

King is a longstanding supporter of The Prince’s Trust. On 20 June 1986, King and Lindup performed alongside a multitude of stars, including Eric Clapton, Rod Stewart, Phil Collins, Mark Knopfler, Midge Ure and Elton John, at The Prince’s Trust All-Star Rock Concert at Wembley Arena to celebrate the first 10 years of the Trust, which was subsequently released on video. He was also a performer at The Prince’s Trust Rock Gala at the Royal Albert Hall in November 2010 and 2011.

King serves as a tourism ‘ambassador’ for his native Isle of Wight.