Christian Lee McBride (born May 31, 1972) is an American jazz bassist. He is considered a virtuoso, and is one of the most recorded musicians of his generation; he has appeared on more than 300 recordings as a sideman. He is also a five-time Grammy award winner.

McBride was born to Renee McBride in Philadelphia, Pennsylvania. His father, Lee Smith, and his great uncle, Howard Cooper, are well known Philadelphia bassists who served as McBride’s early mentors.

After starting on bass guitar, McBride switched to double bass and studied at the Juilliard School. 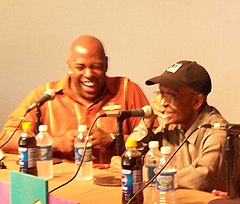 McBride was heralded as a teen prodigy, having joined saxophonist Bobby Watson’s group at the age of 17. From 17 to 22, McBride played in the bands of older musicians such as Watson, Freddie Hubbard, Benny Golson, Milt Jackson, J.J. Johnson and Hank Jones as well as his peers such as Roy Hargrove, Benny Green and Joshua Redman. In 1996, jazz bassist Ray Brown formed a group called “SuperBass” built around McBride and fellow Brown protégé John Clayton. The group released two CDs: SuperBass: Live at Scullers (1997) and SuperBass 2: Live at the Blue Note (2001).

McBride was a member of Joshua Redman’s Quartet in the 1990s with pianist Brad Mehldau and drummer Brian Blade. In 1995 McBride began leading his own groups after his debut CD Gettin’ To It (Verve Records) was released. Saxophonist Tim Warfield, pianists Charles Craig and Joey Calderazzo, and drummers Carl Allen and Greg Hutchinson are among the musicians who played in McBride’s early groups. From 2000 to 2008, McBride fronted his own acoustic / electric, jazz, fusion and funk ensemble, “The Christian McBride Band” with saxophonist Ron Blake, pianist/keyboardist Geoffrey Keezer and drummer Terreon Gully. As writer Alan Leeds stated in 2003, it was “one of the most intoxicating, least predictable bands on the scene”.[citation needed] The band released two CDs – Vertical Vision (Warner Brothers Records | 2003) and their Live at Tonic three-CD set was released in 2006.

In 1996, McBride contributed to the AIDS benefit album Offbeat: A Red Hot Soundtrip produced by the Red Hot Organization.

McBride primarily plays double bass, but is equally adept on the electric bass. He played bass[clarification needed] for the collaborative project The Philadelphia Experiment, which included keyboardist Uri Caine and hip-hop drummer Ahmir “Questlove” Thompson. Other projects have included tours and recordings with the Pat Metheny Trio, the Bruce Hornsby Trio, and Queen Latifah. Like Paul Chambers, McBride can solo by playing his bass arco style.

In 2006, McBride was named to the position of “Creative Chair for Jazz” with the Los Angeles Philharmonic, taking over from Dianne Reeves. He was initially signed to a two-year contract that was subsequently renewed for an additional two years. He was eventually succeeded by Herbie Hancock in 2010.

McBride performed with Sonny Rollins and Roy Haynes at Carnegie Hall on September 18, 2007, in commemoration of Rollins’ 50th anniversary of his first performance there. McBride was also tapped by CBS to be a producer for the tribute to Rollins on the 2011 Kennedy Center Honors broadcast.

In 2008, McBride joined John McLaughlin, Chick Corea, Kenny Garrett and Vinnie Colaiuta in a jazz fusion supergroup called the Five Peace Band. They released a CD in February 2009 and completed their world tour in May of that year, as Brian Blade took over for Vinnie Colaiuta as drummer in Asia and some US concerts. The CD Five Peace Band Live won the 2010 Grammy Award for Best Jazz Instrumental Album, Individual or Group

In 2011 McBride released his first big band album, The Good Feeling, for which he won the Grammy for Best Large Jazz Ensemble Performance.

Christian is married to jazz singer and educator Melissa Walker. Walker, with contributions by McBride, leads the Jazz House Kids, a jazz school in their home town of Montclair, New Jersey. Each summer, they both appear at the Montclair Jazz Festival, along with student ensembles led by the instructors, professional ensembles composed of instructors, and guest acts.

McBride shared the story of his first encounters with Freddie Hubbard, “The Gig”, and his relationship with James Brown “Mr. Soul On Top” on the Peabody Award-winning Moth Radio Hour, a radio show and podcast devoted to================

An asterisk (*) indicates that the year is that of release.

With Pat Metheny and Antonio Sanchez