John Graham “Mac” McVie (born 26 November 1945) is a British bass guitarist, best known as a member of the rock bands John Mayall & the Bluesbreakers and Fleetwood Mac. His surname, combined with that of Mick Fleetwood, was the inspiration for the band’s name. He joined Fleetwood Mac shortly after its formation by guitarist Peter Green in 1967, replacing temporary bass guitarist Bob Brunning.

In 1968, McVie married blues pianist and singer Christine Perfect, who became a member of Fleetwood Mac two years later. John and Christine McVie divorced in 1977. Around this time the band recorded the album Rumours, a major artistic and commercial success that borrowed its title from the turmoils in McVie’s and other band members’ marriages and relationships. He was inducted into the Rock and Roll Hall of Fame in 1998 as a member of Fleetwood Mac.

John Graham McVie was born in Ealing, west London, to Reg and Dorothy McVie and attended Walpole Grammar School. He says that he did have a sister, but she died when she was very young. At age 14 McVie began playing the guitar in local bands, covering songs by The Shadows. He soon realized that his friends were learning lead guitar so he decided to play the bass guitar instead. Initially he just removed the top two (E and B) strings from his guitar to play the bass parts until his father bought him a pink Fender bass guitar, the same as that used by McVie’s major early musical influence Jet Harris, The Shadows’ bass player. McVie was in 3J class with Roger Warwick, a baritone sax player who had studied under Don Rendell and was to emerge in the London rock-jazz scene. Their teacher, Mr Howell (a pianist), although not really appreciating this “funny” music, was intelligent and open-minded enough to give pupils space and time to use school facilities to practise and listen to the new wave.

Soon after leaving school at 17, McVie trained for nine months to be a tax inspector. This coincided with the start of his musical career.

McVie’s first experience making music with a group of like minds was in the back room of a house in Lammas Park Road, Ealing with his long term friends John and Peter Barnes who later went on to form a group called The Strangers with friends Tony Wells and Ken Pollendine performing Shadows covers. At this time, although only possessing a Framus acoustic with top two strings removed John showed a determination and ability that would take him to success as a professional musician.

McVie’s first job as a bass player was in a band called the Krewsaders, formed by boys living in the same street as McVie in Ealing, West London. The Krewsaders played mainly at weddings and parties, covering songs from The Shadows.

Around the time of McVie’s tenure as a tax inspector, John Mayall began forming a Chicago-style blues band, John Mayall’s Bluesbreakers. Initially Mayall wanted to recruit bass player Cliff Barton of the Cyril Davies All Stars for the rhythm section of his new band. Barton declined, however, but gave him McVie’s phone number, urging Mayall to give the talented young bass player a chance in the Bluesbreakers. Mayall contacted McVie, and asked him to audition for his band. Soon thereafter, McVie got offered to play bass in the Bluesbreakers. McVie accepted while still holding down his daytime job for a further nine months before becoming a musician full-time. Under Mayall’s tutelage, McVie, not having had any formal training in music, learned to play the blues mainly by listening to B.B. King and Willie Dixon records given to him by Mayall.

In 1966, a young Peter Green was asked to join Mayall’s Bluesbreakers as the band’s new lead guitar player, after Eric Clapton, the third guitarist with the band (after Bernie Watson and then Roger Dean), had left. Some time later, after the recording of A Hard Road, drummer Aynsley Dunbar was replaced by Mick Fleetwood. Green, McVie, and Fleetwood quickly forged a strong personal relationship, and when John Mayall gave Green some free studio time for his birthday, Green asked McVie and Fleetwood to join him for a recording session. Produced by Mike Vernon, they recorded three tracks together, “Curly”, “Rubber Duck”, and an instrumental called “Fleetwood Mac”. Later the same year, after having been replaced by Mick Taylor in the Bluesbreakers, Peter Green opted to form his own band, which he called “Fleetwood Mac” after his preferred rhythm section (Fleetwood and McVie). Mick Fleetwood immediately joined Green’s new band, having been dismissed earlier from the Bluesbreakers for drunkenness. However, McVie initially was reluctant to join Fleetwood Mac, not wanting to leave the security and well-paid job in the Bluesbreakers, forcing Green to temporarily hire a bassist named Bob Brunning. A few weeks later McVie changed his mind, however, as he felt that The Bluesbreakers musical direction were shifting too much towards jazz, and he joined Fleetwood Mac on bass guitar in September 1967. 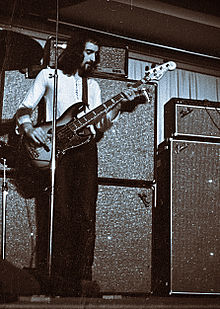 With McVie now in Fleetwood Mac, the band recorded its first album, the eponymous Fleetwood Mac in the following months. The album was released in February 1968, and became an immediate national hit, establishing Fleetwood Mac as a major part in the English Blues movement. Fleetwood Mac started playing live gigs in blues clubs and pubs throughout England, and became a household name in the national blues circuit. In the next three years, the band scored a string of hits in the UK and also enjoyed success in continental Europe.

While on tour, Fleetwood Mac would often share venues with fellow blues band Chicken Shack. It was on one such occasion that McVie met his future wife, the lead singer and piano player of Chicken Shack, Christine Perfect. Following a brief romance of, it has been said, only two weeks, McVie and Perfect got married with Peter Green as best man. With the couple being unable to spend much time together because of the constant touring with their bands, Christine (now McVie) quit Chicken Shack to become a housewife to spend more time with John. However, following the departure of Peter Green from Fleetwood Mac in 1970, McVie successfully persuaded Christine to join him in Fleetwood Mac.

In the years to follow, Fleetwood Mac went through several different line-ups, which occasionally became the source of friction and unease within the band. In addition, frequent touring as well as John McVie’s heavy drinking began to put some strain on his marriage to Christine. In 1974, the McVies, along with the other members of Fleetwood Mac, moved to Los Angeles, where they lived briefly with John Mayall. In 1975, Fleetwood Mac achieved enormous worldwide success after recruiting American singer-songwriter duo Stevie Nicks and Lindsey Buckingham. However, on the heels of the band’s success followed serious marital problems for the McVies, and in 1976, during the recording of Rumours, John and Christine McVie’s marriage unravelled and the couple divorced the same year. As a way to put behind the hurt and final dissolution, several of Christine’s songs on this album were about John McVie, particularly “Don’t Stop”. John McVie remarried in 1978 to Julie Ann Reubens, but still continued to drink heavily.

In 1981, McVie agreed to go on the road with the Bluesbreakers again for the so-called “Reunion Tour” with John Mayall, Mick Taylor and Colin Allen. During 1982 the band toured America, Asia and Australia. (John McVie did not take part in the European Tour in 1983 and was replaced by Steve Thompson).

An alcohol-induced seizure in 1987 finally prompted McVie to stop drinking altogether and he has been sober ever since. In 1989, McVie’s wife Julie Ann gave birth to their first child, a daughter, Molly Elizabeth McVie. In his spare time, McVie is a sailing enthusiast, and he nearly got lost at least once on a Pacific voyage. A naturally reclusive man, his involvement with Fleetwood Mac has been constant but notably low-key, despite the fact that the band takes the “Mac” part of its name from him.

On 27 October 2013, Fleetwood Mac announced on their Facebook Page that McVie had been diagnosed with colon cancer and would be undergoing treatment. He continued to play with the band during their 2014 On With The Show tour following an improvement in his condition.