Krist Anthony Novoselic (/ˌnoʊvəˈsɛlɪtʃ/; Croatian: Krist Novoselić; often referred to as Chris Novoselic, born May 16, 1965) is an American rock musician, and was the bass guitarist and member of the grunge band Nirvana. After Nirvana disbanded following the death of Kurt Cobain in 1994, Novoselic formed Sweet 75 and Eyes Adrift, releasing one album with each band. From 2006 to 2009 he played in the punk band Flipper, and in 2011 contributed bass and accordion to the song “I Should Have Known”, on Foo Fighters’ studio album Wasting Light.

Apart from his musical endeavors, Novoselic has been active politically, including the creation of the political action committee JAMPAC (Joint Artists and Musicians Political Action Committee). From 2007 through 2010 he wrote a weekly column on music and politics for Seattle Weekly’s website.[1] Since 2008 Novoselic has been board chair of the electoral reform organization FairVote.

Krist Anthony Novoselic was born to Croatian immigrant parents, Krsto and Maria, in Compton, California. He lived there for one year before his parents moved to the Croatian neighborhood of San Pedro, where he remained for most of his childhood.

Novoselic has a younger brother Robert, born in 1968. His sister Diana was born in 1973. His family moved to Aberdeen, Washington in 1979, because of rising property prices in California. In 1980, his parents sent him to live with relatives in Zadar, Croatia, then part of SFR Yugoslavia. Novoselic returned to Aberdeen in 1981.

Novoselic was already interested in hard rock bands such as Led Zeppelin, Black Sabbath, The Who, Van Halen, and Aerosmith. He also enjoyed listening to Yugoslavian bands such as Zabranjeno Pušenje, Prljavo kazalište and Azra. While in Yugoslavia, he picked up an interest in punk rock, and discovered bands such as the Sex Pistols and Ramones. He has cited Paul McCartney, Geezer Butler, John Entwistle, and Gene Simmons as the fundamental influences of his bass playing.

Sometime later, Novoselic’s brother Robert introduced him to his friend Kurt Cobain, who had noticed loud music coming from upstairs. Robert told Cobain that it was his older brother, who listened to punk rock. Cobain eventually befriended the older Novoselic, as the pair ended up sharing similar musical tastes, including a fondness for local band Melvins. The two had several mutual friends and began hanging out shortly thereafter. At one point, Cobain gave Novoselic a demo tape of his former band Fecal Matter, and asked him to form a band together. After several months, Novoselic finally listened to the tape, liked it, and agreed to start a band with Cobain.

Cobain and Novoselic’s first band lasted barely a few weeks before it disbanded, leaving the pair to move on. However, the duo eventually discovered that Melvins could pull $80 a night for one show. Inspired, Cobain and Novoselic started a Creedence Clearwater Revival cover band, in which Cobain played drums and Novoselic sang and played guitar. That band was short-lived as well.[9] Some months later, Cobain and Novoselic met drummer Aaron Burckhard. While the new band never used the name, it was the first incarnation of Nirvana.

Burckhard lasted only a few months and Melvins’ drummer Dale Crover filled in until Novoselic and Cobain met Chad Channing. The trio recorded their debut album Bleach, released in 1989. Channing left the band in 1990 and was briefly replaced by Crover and Mudhoney drummer Dan Peters.

Later in 1990, Melvins’ singer-guitarist Buzz Osborne encouraged Novoselic and Cobain to check out a punk band called Scream. The pair were impressed by their drummer, Dave Grohl. A few weeks later, Scream disbanded, and Grohl placed a call to Osborne for advice. Osborne gave him Novoselic’s phone number, and Novoselic invited Grohl up to Seattle (from San Francisco, where Scream broke up). Grohl passed the audition and joined Nirvana. A few months later, in the spring of 1991, the band recorded their major label debut, Nevermind, which launched the band as a worldwide phenomenon with their hit single “Smells Like Teen Spirit”.

Nirvana ended abruptly in April 1994 following Cobain’s death. For most of the rest of that year, Novoselic retreated from the spotlight. One of a few public appearances came that September at the MTV Video Music Awards, where the video for Nirvana’s “Heart-Shaped Box” was awarded for Best Alternative Video. Novoselic took the opportunity to pay tribute to Cobain.

The following year, Novoselic continued to dabble in musical endeavors. He formed the band Sweet 75 in 1995, releasing a single self-titled album in 1997. In 2002, Novoselic performed uncredited background vocals on Foo Fighters’ song “Walking a Line”, written as a tribute to Cobain, during the One by One album sessions. The track is included on the One by One bonus DVD, as well as being a bonus track to the album.

In 1998, Novoselic directed his first movie, L7: The Beauty Process, a pseudo-documentary that utilizes concert footage taped in 1997 in three American cities. In 1999, he joined Jello Biafra and Soundgarden guitarist Kim Thayil in the No WTO Combo. He then joined former Meat Puppets front man Curt Kirkwood and former Sublime drummer Bud Gaugh to form Eyes Adrift, which disbanded in 2003. This band was significant as it was the first official release in his career where he sang lead vocals. He also took a highly active role in the songwriting process, co-writing several songs with Kirkwood.

Following the end of Eyes Adrift, Novoselic announced that he was quitting the music business, noting that he disliked the process of building up publicity for new records. However, in recent years, Novoselic has occasionally worked on music for a possible solo album, noting, “Right now, I’m just doing it for myself, and that’s what it’s all about.”

In November 2006, it was announced that Novoselic would join Flipper, replacing Bruno DeSmartas on bass, for a tour of the United Kingdom and Ireland. He was a full-time member of the band and had been working on their new album. On September 22, 2008, because of responsibilities at home, Novoselic announced his departure from the band. As a result, the band canceled the remainder of the tour. Rachel Thoele then replaced Novoselic.

In 2009, Novoselic played a newspaper vendor in the movie World’s Greatest Dad starring Robin Williams. In October 2010, Dave Grohl, former Nirvana bandmate of Novoselic, announced live on BBC radio, that Novoselic will be joining Foo Fighters as a bassist and accordionist on their next album, Wasting Light, which was released in 2011.

Novoselic also played bass on children’s music artist Caspar Babypants’ 2010 album This Is Fun!, for a cover of the Nirvana song “Sliver”.[16][17] In 2011, he performed “On a Plain” and “Sliver” with the band at the Nevermind 20th anniversary celebration in Seattle.

On April 17, 2016, Novoselic performed with Paul McCartney on “Helter Skelter” in Seattle as part of the One on One (tour) during the encore.

In November, 2016, Novoselic confirmed through a reply to a tweet that he is writing more new music.

Performance and recording with Foo Fighters

Novoselic’s first experience with Foo Fighters was participating in the encore of their show on August 29, 1997 at Memorial Stadium as part of the Bumbershoot festival, where he played bass for the band’s covers of “Purple Rain” and “Communication Breakdown”. In January 2002, Novoselic performed backing vocals for a non-album track titled “Walking a Line”, later released on a special edition of the band’s album One by One.

Later, during the encore of Foo Fighters’ secret show at Paladino’s in Tarzana, California on December 22, 2010, the band, with Grohl on drums was joined onstage by Novoselic and the band’s live guitarist Pat Smear for a version of Nirvana’s “Marigold” a 1992 Grohl original, which was a B-side on Nirvana’s “Heart-Shaped Box”, the first single from In Utero. Novoselic also recorded bass and accordion on the song “I Should Have Known”, appearing on Foo Fighters’ seventh studio album called Wasting Light, released on April 12, 2011. 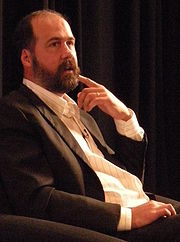 Novoselic remains active in politics as an elected State Committeeman, making appearances to advocate electoral reform (especially instant-runoff voting and proportional representation) and running the website. He considered a 2004 run for Lieutenant Governor of Washington as a Democrat, challenging an incumbent of the same party, but ultimately decided against it. He also joined the board of FairVote, then the Center for Voting and Democracy, and was appointed chair in January 2008.

Novoselic’s first book, Of Grunge and Government: Let’s Fix This Broken Democracy, was published in October 2004. It covers Novoselic’s musical past, including Nirvana’s rise to a worldwide phenomenon of the early 1990s.[27] It also covers his interest in politics, his support of electoral reform, and his belief in the need to return to grassroots movements and clean up politics overall.

He supported Democratic Senator Barack Obama in the 2008 Presidential election, and in the primary. He has since broken with the Democratic Party, partly because “it’s a top-down structure” adverse to reform from its grassroots. In 2007, he made a donation to libertarian Republican Congressman Ron Paul.

He withdrew from the campaign for county clerk of Wahkiakum County. He was running under the “Grange Party”. He is a member of the National Grange of the Order of Patrons of Husbandry. However, the Grange is not actually a political party. He was running in order to protest Washington state’s system, in which a candidate can claim any party as their own (real or fictional) without consent or support from the party.

Novoselic continues to support political reform, even looking at social networks such as Facebook and Twitter, as major factors in shaping the political future.He explained his support for fair voting reforms on C-SPAN’s Washington Journal in 2012.

In an interview for Reason TV, Novoselic was asked how he described his political views, and he responded, “I’m an anarcho-capitalist, socialist, moderate… I don’t know” and continued to say that while his political views couldn’t be easily categorized, he finds fault in the political philosophies of both the left and right-wing. On his Twitter page, he announced that he had voted for 2016 Libertarian presidential candidate Gary Johnson. On his blog, he supported Lawrence Lessig and his political campaign.

Novoselic wrote a blog for the Seattle Weekly website from 2007 to 2010. In 2016, he completed a Bachelor of Science degree in social sciences from Washington State University.