Pappalardi was born in The Bronx, New York City. A classically trained musician, he graduated from New York City’s The High School of Music & Art and attended the University of Michigan.

In 1964 Pappalardi was a member of Max Morath’s Original Rag Quartet (ORQ) in their premier engagement at New York’s Village Vanguard with several other famous musicians. Along with Felix on guitarrón (Mexican acoustic bass) were pianist/singer Morath, who revived classic ragtime played in the Scott Joplin manner, Barry Kornfeld, a well-known NYC studio folk and jazz guitarist, and Jim Tyler, a famous Baroque and Renaissance lutenist playing four string banjo and mandolin. The ORQ then toured the college and concert circuit during the following year, and opened four engagements with the Dinah Shore show in Las Vegas and elsewhere. Pappalardi studied classical music at the University of Michigan. Upon completing his studies and returning to New York, he was unable to find work and so became part of the Greenwich Village folk-music scene where he made a name for himself as a skilled arranger; he also appeared on Tom Paxton as well as Vince Martin and Fred Neil albums for Elektra Records. From there he moved into record production, initially concentrating on folk and folk-rock acts for artists such as The Youngbloods and Joan Baez.

As a producer, Pappalardi is perhaps best known for his work with Cream, beginning with their second album, Disraeli Gears. Pappalardi has been referred to in various interviews with the members of Cream as “the fourth member of the band” as he generally had a role in arranging their music. He contributed instrumentation for his imaginative studio arrangements and he and his wife, Gail Collins, wrote the Cream hit “Strange Brew” with Eric Clapton. He also produced The Youngbloods’ first album.

As a musician, Pappalardi is widely recognized as a bassist, vocalist, and founding member of the American hard rock band/heavy metal forerunner Mountain, a band born out of his working with future bandmate Leslie West’s soul-inspired rock and roll band The Vagrants, and producing West’s 1969 Mountain solo album. The band’s original incarnation actively recorded and toured between 1969 and 1971. Felix produced the band’s albums, and co-wrote, and arranged a number of the band’s songs with his wife Gail Collins and Leslie West.

The band’s signature song, “Mississippi Queen” is still heard regularly on classic rock radio stations. They also had a hit with the song “Nantucket Sleighride” written by Pappalardi and Collins.

Felix generally played Gibson basses live and on Mountain’s recordings. He is most often shown with an EB-1 but there are photographs of him playing an EB-0 live. He was known for playing a Gibson EB-1 violin bass through a set of Sunn amplifiers that, he claimed, once belonged to Jimi Hendrix. 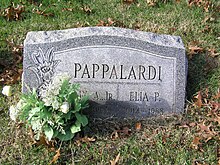 The grave of Felix Pappalardi in Woodlawn Cemetery

Pappalardi was forced to retire because of partial deafness, ostensibly from his high-volume shows with Mountain. He continued producing throughout the 1970s, released a solo album (Don’t Worry, Ma) and recorded with Kazuo Takeda’s band Creation (who had opened for a reunited Mountain during their 1973 tour of Japan).

In May 1973, the British music magazine NME reported that Pappalardi would be producing and playing bass on Queen of the Night, the debut album for Maggie Bell, former singer of Stone the Crows, but this proved to be a false rumor.

Pappalardi was shot and killed by his wife, Gail, on April 17, 1983, in their East Side Manhattan apartment, with a derringer he had given her as a gift a few months previously. Gail Pappalardi was subsequently charged with second-degree murder and was found guilty of the lesser criminally negligent homicide.

He is interred next to his mother at Woodlawn Cemetery in The Bronx, New York City.

For his work with Mountain, see their page.

Other appearances and contributions