Giuseppe Henry “Pino” Palladino (born 17 October 1957) is a Welsh bassist who is a founding member of the John Mayer Trio. He replaced John Entwistle in The Who and has recorded and toured with D’Angelo and the Vanguard.

Born in Cardiff to an Italian father from Campobasso, Umberto Palladino, and a Welsh mother, the former Ann Hazard, Palladino began playing the electric guitar at age 14. By 17 he decided to play the bass guitar, and bought his first fretless bass one year later, playing mostly R&B, funk, and reggae with a rock and roll backbeat. His first professional gig, at age 20, was at a television station in Cardiff in 1978. During the same year, he joined Jools Holland’s band and appeared on the album Jools Holland and His Millionaires.

Touring with Holland to support the album gave him the opportunity to purchase his own Music Man StingRay Fretless Bass. While Holland was touring with another new band, the Q-Tips, its frontman, Paul Young, became acquainted with Palladino and, a year later, offered him a place in his backing band.

After Young signed a solo contract in 1982, he hired Palladino. Young had chart success with the album No Parlez and with the hit songs “Wherever I Lay My Hat” (No. 1 in the UK) and “Love of the Common People,” on both of which Palladino played. Palladino stayed with Young for five years.

In 1983, Paladino joined The Law with Paul Rodgers, formerly of Bad Company and The Firm, and drummer Kenney Jones, who had succeeded Keith Moon in The Who after Moon died, and recorded the album The Law.

In the 1990s, Palladino began to alternate between the sounds achieved in playing the fretless bass to one with frets, as well as the 4-string and 6-string bass. At the time, he was well known within the industry for his fretless bass sound. However, now, depending on which artist he was supporting, and the song to be played, he began gravitating towards fretted bass. He was maturing as a musician, and played with artists as diverse as Melissa Etheridge, Richard Wright, Elton John and Eric Clapton. Also in 1991 he joined Paul Rodgers (of Free, Queen + Paul Rodgers, and Bad Company fame) to form the band The Law. In the mid-1990s, Palladino played bass for The London Metropolitan orchestra during their recording of An American Symphony, soundtrack for the movie Mr Holland’s Opus.

In 1990 Palladino joined Mike Lindup (founding member of Level 42) to feature on Lindup’s first solo album Changes, a song album with Dominic Miller on guitar, who later went on to work with Sting; and Manu Katché on drums.

Palladino supported Phil Collins, as a member of the house band for the Golden Jubilee of Elizabeth II, which played with Paul McCartney, Eric Clapton, Cliff Richard, and Tony Bennett, among other notable performers. He later wrote that he felt privileged to have been amongst the others on stage in such an event.

In 1999, he began working with Richard Ashcroft, of The Verve, during the recording sessions of Ashcroft’s debut solo album, Alone With Everybody. Richard proved to be mightily impressed by Palladino’s natural bass playing ability;

By the mid-1990s, Palladino had established himself as a busy, highly desirable bassist and a studio worker in many genres, but finally became visible to those artists who played largely left of center, and demand for his session playing grew within a different quarter. Palladino began moving from blues-rock toward neo soul projects. Palladino and Steve Jordan found themselves performing on the same session for B.B. King’s 1997 duets CD Deuces Wild. It was the first time soul singer D’Angelo first heard Palladino, who had just switched from a signature sound fretless bass sound to that of performing with fretted basses. The result was an invitation to “use Pino’s big, behind-the-beat bass to help cast a neo-soul spell on his Grammy Award-winning Voodoo album.

Examples of his bass work in this genre include much of the Soulquarians’ production discography, such as Mama’s Gun, and Penitentiary Philosophy found on Erykah Badu’s 2000 CD. Other albums using Palladino’s sound include 1st Born Second for Bilal, Like Water for Chocolate and Electric Circus for Common.

Following the death of The Who’s bassist John Entwistle the night before the band were to kick off their first tour in two years, Palladino was their first choice to become the band’s full-time touring bass guitarist, and by 2006, he was invited to join the remaining original band members in recording their first album in twenty-four years. Pete Townshend, the band’s composer, recorded the bassline on the majority of the songs to get the effect he himself wanted, with Palladino doing so on the other six of them. Released in October 2006, the album was named Endless Wire.

Palladino also played with The Who at the Super Bowl XLIV half-time show, in February 2010, alongside other backing artists: Simon Townshend on guitar, Zak Starkey, drums and percussion, and John “Rabbit” Bundrick, on keyboard instruments.

In 2003, Palladino intended to go down to see his old friend Paul Simon and meet Brian Eno for the first time. He was asked to record with them, and had to borrow a bass guitar to play. The result was that he played with Simon and Garfunkel on their Old Friends reunion tour and in an interview with Bass Player Magazine he mentions drummer Steve Gadd and percussionist Jamey Haddad “had laid down some great grooves for me to add bass”. He had kept the recordings, and by the time that he appeared on the Old Friends: Live on Stage CD and DVD from the tour, he was able to use some of the material. He played on Paul Simon’s 2006 release, Surprise.

Palladino has toured in the backing band for Joe Walsh. In 2004, he appeared to be playing with Gary Moore at the Wembley Arena. He also contributed to the recording process of Nine Inch Nails’ 2013 release Hesitation Marks, and also began touring with the band for their Tension 2013 tour. Trent Reznor said he is “probably the best bass player in the world.”

Emergence of the John Mayer Trio 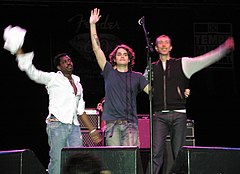 Palladino met Steve Jordan in the mid-1980s while both were working as session players on many occasions, which blossomed into a friendship. Jordan credits Palladino’s apparent ability to “feel” changes in music, through melodies, basslines, and an embrace of genres of nearly every kind. According to Jordan, he had planned to meet up with John Mayer and Willie Weeks in January 2005 to perform a benefit concert on a NBC sponsored telethon Tsunami Aid: A Concert of Hope to raise funds and public awareness benefiting victims in the aftermath of the tsunami that struck southeast Asia. Weeks was unable to make the performance, and Jordan suggested Palladino, who had heard some of Mayer’s work, and was willing to come. Beginning a set that included the Jimi Hendrix classic, “Bold as Love”, the three found a chemistry together and set about their schedules to record a CD and a tour as a power trio. They released the album Try!, on 22 November 2005. The eleven-track live album includes cover songs, such as Jimi Hendrix’s “Wait Until Tomorrow” and “I Got A Woman” by Ray Charles, two songs from Mayer’s release Heavier Things, as well as new songs written by Mayer. In addition, Mayer, Palladino, and Jordan are credited as songwriters on three songs on the album: “Good Love Is On The Way”, “Vultures”, and “Try!”.[4] Along with John Mayer on guitar and vocals, and Steve Jordan on drums, Palladino rounded out the outfit, touring and recording as the bass guitarist of the John Mayer Trio, and on Mayer’s third album Continuum and fourth album Battle Studies.

Palladino is noted for his use of the fretless bass in many 1980s chart records. While it was typical for a bass guitar in a commercial track to have a rather generic sound and stay “playing the low notes” Palladino preferred a different sound (combining fretless tone with an octaver effect) and basslines that frequently added chords, lead lines and counter melodies in the higher range of the instrument as opposed to simply the aforementioned “low notes”. Typical of this style was his playing on Paul Young’s biggest chart hits, in particular his playing on Wherever I Lay My Hat. His equipment at that time included a fretless Music Man StingRay Bass 1979 and Boss Octave pedal (OC-2).

The Fender Pino Palladino Signature Precision Bass is modelled after two of Palladino’s Fender Precision Basses. The body featuring faded fiesta red paint over desert sand paint is based on Palladino’s 1961 Precision Bass while the neck shape and round-lam rosewood fret board are based on Pino’s 1963 sunburst Precision Bass. He has also been known to prefer Thomastik-Infeld flat-wound bass strings.[13] Although as instruments change depending on the desired result (the Fender Japan Jaguar has featured on many stage and recordings since about 2006), strings brands and type ( round/flat/semi) may change too. As of The Who Hits 50 Tour ( 2014/15/16…), Pino has chosen Ernie Ball Cobalt flatwound strings gauged .043, .056, .070., .100 standard tuning. The cobalt strings have a great punch and edge not always available with flatwound strings. The primary bass on this tour is a Fender Custom Shop Pino Palladino model, modified with 60’s Gibson Thunderbird pickups. Experiments in sound saw the brief addition of a Gibson EBO pickup. Amplifiers continue to be the Fender SuperBassman first used for Quadrophenia 2012/13 Main pedals include Analog Alien Alien Bass Station, compressor, distortion, amp emulator and MXR Bass Octave effect. Pedal Power II

In March and April 2006, Palladino toured with Jeff Beck. He also played with J. J. Cale, and Eric Clapton on their 2006 album The Road to Escondido, alongside other notable musicians, including Derek Trucks, and Billy Preston. It was to be Preston’s last work before he died only days afterward. Palladino joined Eric Clapton’s touring band for 11 dates in the Eastern US and Canada in May 2008.

In 2009, Palladino joined with keyboardist Philippe Saisse and Simon Phillips to form an instrumental trio: Phillips Saisse Palladino, an instrumental progressive jazz/funk rock ensemble, which have toured Europe through 2009 into 2010, playing songs that spotlight the talents of each performer, in the manner of many jazz outfits. He has also worked on an album with Clapton and Robbie Robertson, and played on Amos Lee’s third album, Last Days at the Lodge. He appears on Jeff Beck’s 2010 album, Emotion & Commotion. As of August 2010, Palladino has been touring with Herbie Hancock.

Palladino also appears on Manu Katché’s third jazz album, Third Round. Both had already played together several times, particularly on Paul Young’s Other Voices, as Stephan Eicher’s rhythm section in the first half of the 1990s, and on stage with Manu Katché’s jazz band The Tweeters. Currently in the studio recording with Steve Gadd; Edie Brickell; Andy Fairweather Low; who have formed a group the Gaddabouts.

In January 2011, he entered the studio with D’Angelo to finish recording the long overdue follow up to Voodoo.

In January 2011, Palladino played on the second album of Adele: 21, while in May in the same year he played on the last EP of Revolver, Parallel Lives.

As of May 2016, Palladino was still touring with The Who for the band’s The Who Hits 50! tour.