Billy Sheehan’s first electric bass was a Hagström FB, which was soon joined by a Precision bass similar to Tim Bogert’s. After acquiring the Precision bass, he removed the frets from the Hagström. Over the years, he heavily modified the Precision bass as well, adding a neck pickup and additional support for the bolt-on neck, which Sheehan considers its greatest weakness. The neck pickup was added for what Sheehan referred to as “super deep low end” modelled after Paul Samwell-Smith of the Yardbirds. The Gibson EB-0 type pickup in the neck and the original split Precision bass pickup each have their own separate output jacks on the bass itself, allowing for control of the tone via the bass. This bass has been retired, but he affectionately refers to it as “The Wife”. Sheehan’s signature Yamaha bass is patterned after this instrument. Sheehan also uses two amps to achieve his signature tone, one with full distortion and notch filtering to sound more guitar-like for solos, and one super-clean for the low end of the neck pickup.

Sheehan’s first full-time band was Talas, a power trio with Dave Constantino on guitar and Paul Varga on drums. The band played a mixture of cover songs and original material, and all three instrumentalists alternated on lead vocals.

Talas was a popular local band in Buffalo for over a decade, attaining a cult status which spread into the northeast US and into Canada. In 1978, Talas released their eponymous debut album, which generated the regional hit single, “See Saw”. It was during this time that Sheehan wrote “Shy Boy” (later re-recorded with David Lee Roth), and the complex and frenetic “Addicted to that Rush” (later re-recorded with Mr Big). 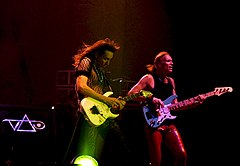 Sheehan in a concert with Steve Vai, 2005

In the late 1970s, Sheehan also played in a band called Light Years with drummer Ron Rocco who had earlier played in a band called Black Sheep with Foreigner singer Lou Gramm in Rochester, NY. After Sheehan returned to Talas they opened a show for UFO in Buffalo. This led Sheehan to an association with guitarist Michael Schenker and also helped land him the job touring with UFO in 1983.

Talas’ first national exposure happened in 1980, when they opened thirty shows for Van Halen. However, success was elusive, and even as their brand of what came to be known as “glam metal” gained popularity over the next few years, Talas remained an unsigned act, due largely to poor management. They independently released their debut eponymous “Talas” LP on Evenfall Records (reissued by Metal Blade) and then “Sink Your Teeth into That” on Relativity Records.

Seeking to take Talas further than just regional success, Sheehan reformed Talas with another drummer (Mark Miller), guitarist (Mitch Perry, also later of Heaven), and a dedicated vocalist, Phil Naro, with whom in the late 1970s Sheehan had previously worked in his side project (the Billy Sheehan Band). Talas would release only one more album, Live Speed on Ice. After Mitch Perry left the band, he was replaced by Johnny Angel, who played guitar with them for their 1985/86 US tour opening for Yngwie Malmsteen’s Rising Force. There was a fourth Talas record, tentatively titled “Lights, Camera, Action” to be issued on Gold Mountain/A&M, but it never got past the demo stage due to Sheehan leaving to join David Lee Roth’s solo band. Talas did briefly continue on under Phil Naro sans Sheehan, enlisting Jimmy Degrasso on drums, Al Pitrelli on guitar, Bruno Ravel on bass and Gary Bivona on keyboards but by this time Talas was dead and Ravel formed Danger Danger. Sheehan also auditioned for Toronto based rock band Max Webster, Sheehan being a long time friend of Max Webster singer guitarist Kim Mitchell who fronted Max Webster from 1973- 1981

In the early 1980s, Sheehan became involved with the proto-thrash metal band Thrasher, during this time he shared the stage with future Anthrax guitarist Dan Spitz. His involvement with Thrasher did not last long but he did play on 2 songs from the self-titled LP, which has not been released on CD to date.

In January 2009 Billy Sheehan reunited with his old Mr Big band members: Eric Martin, Paul Gilbert and Pat Torpey for a reunion tour in Japan. In April 2009 Sheehan’s third solo album, Holy Cow!, produced by Simone Sello, was released by Mascot Records. The album features guest appearances from Paul Gilbert, ZZ Top’s Billy Gibbons and King’s X bassist Doug Pinnick. Gilbert has stated in an interview that his amicable collaboration with Sheehan on Holy Cow!, recorded prior to January, was likely a factor in the decision to reunite Mr Big. Mr. Big is still together- their reunion album What If… produced by Kevin Shirley was released December 15, 2010 in Japan, and January 21, 2011 in Europe. It was released February 8, 2011 in the U.S. A follow-up album, “…The Stories We Could Tell”, was released in September 2014.

Sheehan reunited with his fellow Talas bandmates for a reunion concert at the Hard Rock Cafe in Niagara Falls, New York on July 28, 2012.

Sheehan toured with PSMS (Portnoy/Sheehan/MacAlpine/Sherinian), an instrumental supergroup, in the second half of 2012.

Sheehan, along with Portnoy and Richie Kotzen, recorded the debut album for their new band The Winery Dogs in August 2012. The self-titled album was released on May 5, 2013 in Japan, and July 23, 2013 worldwide. Their second album Hot Streak (album) was released in 2015.

Sheehan has been an active member of the Church of Scientology since 1971. 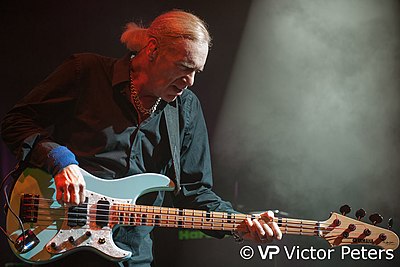 Billy Sheehan, playing with The Winery Dogs at De Boerderij in Zoetermeer, The Netherlands (2013/09/06)