Michael Jay Shuman (born August 20, 1985), also known as Mikey Shoes, is an American musician and songwriter. He is best known for playing bass with rock band Queens of the Stone Age. He also sings and plays the drums and various other instruments in Mini Mansions, and formerly co-fronted Wires on Fire and Jubilee.

Shuman co-founded, co-fronted, and played bass for Jubilee until late 2008, and is the bassist of Wires On Fire, both on Buddyhead Records. He joined Queens of the Stone Age in 2007 before the release of Era Vulgaris, replacing Alain Johannes, who chose to focus on other musical projects.

In 1998, Shuman was featured in the romantic comedy film The Wedding Singer, playing a boy at a Bar Mitzvah.

In 2013, Queens of the Stone Age released …Like Clockwork, their first full album since Shuman joined the band. On the album, Shuman provides vocals and plays bass, percussion, guitar, twelve-string guitar, and Mellotron. The album was the first Queens of the Stone Age album to reach number one on the Billboard 200. It also reached number two on the UK Albums Chart and was nominated for three Grammy Awards, including Best Rock Album.

Shuman contributed to the soundtrack of the video game Grand Theft Auto V in 2013, working alongside other musicians on the game’s score. 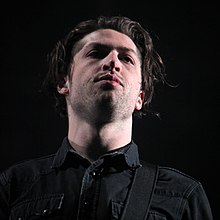