Nicholas More “Nick” Seymour (born 9 December 1958, Benalla, Victoria) is a musician, painter, and record producer. He is the founding mainstay bass guitarist in the Australasian rock group Crowded House; and is also the younger brother of Mark Seymour, singer-songwriter-guitarist, of another rock band, Hunters and Collectors.

Nicholas More Seymour was born on 9 December 1958 in Benalla to Frank and Paula Seymour – both were teachers. He has two older sisters, Hilary and Helen, and an older brother, Mark (born 1956). Helen was later a music teacher, and Mark became the founding lead singer-songwriter-guitarist for Hunters & Collectors. His mother encouraged all four children to learn musical instruments and sing. When he was a young boy they toured country Victoria, as the Seymour Family Singers. In 1972 the family moved to Melbourne, where he attended Yarra Junction Primary School. He taught himself to play bass guitar. After finishing secondary education he studied Visual Arts at a tertiary institute.

Seymour was a member of various local bands, starting with The Glory Boys in 1979, then The Romantics in the next year, and Scratch Record Scratch. In 1981 he joined Plays with Marionettes on bass guitar; which had formed in 1980 with Robin Casinader on drums, piano and Hammond organ; Edward Clayton-Jones on guitar and vocals (ex-Fabulous Marquises); and Hugo Race on lead vocals and guitar. The group performed an “aggravating style of jazzy no-wave noise” and broke up in February 1984. Their recordings include one side of a shared single, “Witchen Kopf” (1982), and “Hellbelly” which appeared on a various artists’ compilation, This is Hot (1984). A briefly existing group, The Horla, were formed by Seymour (ex-Bang); Casinader; Clayton-Jones and Brian McMahon on keyboards but disbanded by the end of 1984.

Seymour also worked as a set designer of films including, The Leonski Incident (1984), and on the TV series, Carson’s Law. At the end of 1984, Seymour auditioned as one of “a long line of bass players” to become a founding member of The Mullanes alongside Neil Finn on lead vocals; and Paul Hester on drums (both ex-Split Enz). He had played to a taped series of tracks previously recorded by Finn and Hester. The group formed early in the next year and included Craig Hooper on lead guitar (ex-The Reels). Hooper left the group and remained behind in Melbourne when the remaining trio travelled to Los Angeles to start recording sessions, where they were renamed, Crowded House. 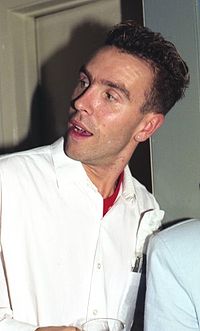 As a member of Crowded House, Seymour provided bass guitar, backing vocals and song writing; as well as artwork for album covers, costumes and stage sets. With their second album, Temple of Low Men (July 1988), he won the ARIA Music Awards of 1989 category for Best Cover Art. He was nominated for the same award for Crowded House (June 1986) in 1987, Woodface (July 1991) in 1992, and Together Alone (October 1993) in 1994. In early 1989, after a tour of Australia and Canada, Finn fired Seymour from Crowded House. According to music journalist, Ed Nimmervoll, Seymour’s departure was due to Finn blaming him for causing the latter’s writer’s block. However Finn cited “artistic differences” as the reason. Seymour said that after a month apart, he contacted Finn and they agreed that he would return to the band. He subsequently stayed with the group until their disbandment in 1996.

After Crowded House separated, in November 1996, Seymour joined latter day band mate, Peter Jones (who had replaced Hester in 1994), in a pop rock band, deadstar. That group had formed in August 1995, as a side project, by Jones on drums and percussion, Caroline Kennedy on lead vocals and guitar; and Barry Palmer (of Hunters & Collectors) on lead guitar and, initially, on bass guitar. With Seymour aboard they toured the United Kingdom and recorded their second album, Milk (August 1997).[11][12] He left deadstar at the end on 1997. While still in deadstar, Seymour had worked on Mark’s debut solo album, King Without a Clue (October 1997), alongside band mates Jones and Palmer.

Seymour produced the debut album, Neither Am I (October 2000), for Irish band Bell X1. He had moved to Dublin, and helped establish Irish bands, Juno Falls and Vesta Varro as well as recording a rock band, The Walls. In 2003, he re-teamed with Hester to form another group, Tarmac Adam.

Following the 2005 death of Crowded House drummer Paul Hester, Seymour reconnected with Finn and followed by performing on his third studio album. Through time, this project converted from a solo project into the fifth Crowded House album. In 2007, Neil Finn, Mark Hart and Nick Seymour reformed Crowded House, adding Matt Sherrod as drummer. The album Time on Earth was released in June 2007 and the group started a world tour in support of it.

Seymour composed the score for the 2012 documentary The Summit.

In 2013 he guested, along with Pete Roudolo, Steven Mogerly, Conor Murray and Hot House Flower Liam Ó Maonlaí on Rónán Ó Snodaigh’s album of songs in Irish, Sos. The band was called The Occasionals.

Nick Seymour was married to Brenda Bentleigh in 1989: they separated in 1993. In 1997 or 1998 Seymour moved to Dublin, where he had bought a home. He later established a recording studio, Exchequer Studios, with Brian Crosby of Bell X1. Seymour and his partner have a daughter, Lola.