Stevens records with his band Shocka Zooloo, a power trio that features Michael Barnes “Master Blaster” on guitar and Garry “G-Man” Sullivan on drums. To date Stevens, with the band Shocka Zooloo and earlier the band Out Of Control, has released seven albums, the most recent being Africans in the Snow for the SPV Steamhammer label.

Along with his work as both songwriter and producer, Stevens works with other artists. Scheduling at least two European Shocka Zooloo tours each year, he also toured in 2004 with Jean Paul Bourelly and drummer John Blackwell (Prince). In Autumn 2005 he completed an Asian tour with Neil Zaza going directly into a lengthy European tour with Shocka Zooloo. Stevens finished 2005 with a collaboration with Carl Palmer and Andrea Braido in Italy and Russia which was followed by a European ELP tour in February 2006. As of 2007, he is also the current touring bassist for The Headhunters. In March 2008 while on his solo tour his bus was attacked by fireworks thrown by a young fan, the young fan who could only be called JO due to legal reasons was charged with vandalism and given community work. In summer 2011 he joined the Bootsy Collins Funk Unity Tour.

Steven’s vocals came about through James Brown’s insistence that he not only play bass but sing on “Living in America” and on Brown’s album, Gravity.

Stevens has recorded with many artists including:, Steve Vai, Neil Zaza, Cyndi Lauper, Little Steven, Tina Turner, Dan Hartman and Billy Joel. A former member of The Pretenders, Stevens recorded on the platinum album Get Close. He produced and arranged the album Tribute to Deep Purple According to New York on which included: Vinnie Moore, members of Living Colour and Bernie Worrell of Parliament-Funkadelic. Stevens performed on Joe Cocker’s album, Unchain My Heart. Together with Narada Michael Walden he penned the Billboard hit “I Should Have Loved Ya”.

His early jazz years brought him to play with the legendary jazz trumpeter, songwriter and bandleader Miles Davis.

Stevens has been a resident of West Long Branch, New Jersey. 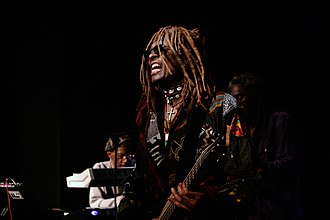 Stevens is often seen with Warwick basses, most notably 4-string neck-through Streamers. He has his own signature model, the Zooloo Warrior, which features images of African motifs on a bright colored background. His signature model also sports African styled “Mask” abalone inlays and a painted wenge neck.

Previously, he was using Cort bass guitars, his own signature model called Funkmachine and the A5 model.

TM is also a legend in the ranks of Dean Markley Strings where he has been an endorsee for over 20+ years.

Morley pedals has also given him a signature bass Wah Wah pedal with a painted picture of himself playing a bass and a text saying “fonk wah”.

Recordings with other artists