Sergio Vega (born August 25, 1970) is an American musician of Puerto Rican descent. He is the bassist of post-hardcore band Quicksand, which originated in New York City in 1990. In 1995, Quicksand disbanded, although they reunited again in 1997 to tour with Deftones. After this tour, the band desired to write a follow-up to their last album Manic Compression, although tensions between bandmates caused the band to split up again, until June 2012 when another reunion was announced. Vega began playing for Deftones, replacing Chi Cheng after Cheng was involved in a car accident which caused him to enter a semi-conscious state in November 2008 and led to his eventual death on April 13, 2013. With Deftones he released the albums Diamond Eyes (2010) and Koi No Yokan (2012), and worked on the band’s eighth studio album, Gore, which was released on April 8,

In 1988 he became the bass player for a New York hardcore band Collapse which released a demo and contributed a track on the 1988 New Breed cassette compilation released by Freddy Alva of Wardance records. In 1989 Sergio Vega replaces Alan Peters (ex-Agnostic Front bassist) in the New York hardcore band Absolution… In 1990, Sergio Vega was instrumental in forming the new post-hardcore band Quicksand; at the time Vega was a prominent bassist of the genre. Quicksand released their debut album, Slip, on February 9, 1993. On January 1, 1995, Quicksand released their second, and final album, Manic Compression. Later that year, Quicksand disbanded, and Sergio Vega began to DJ around New York City and Japan. The band reunited briefly in 1997 and toured with Deftones the next year. After this tour, the band desired to write a followup to Manic Compression, although tensions between bandmates caused the band to split up permanently. In 1999, when Deftones bassist Chi Cheng was unable to perform onstage during a Deftones tour due to a toe surgery, Vega filled in for him on bass.

In addition to his career with Quicksand and Deftones, Vega has released solo material. He released his first solo EP entitled The Ray Martin Sessions through the indie record label grapeOS in 2000. Vega’s solo work was more similar to The Beatles than his heavier, hardcore- and metal-based work in Quicksand and Deftones. The EP was well received by music critics, the success of The Ray Martin Sessions allowed Vega to tour the US and UK. He toured with Scott Winegard and Charlie Walker (later to become members of New End Original) as well as former Orange 9mm/Helmet guitarist Chris Traynor.

On November 4, 2008, Deftones bassist Chi Cheng was seriously injured in a car accident in Santa Clara, California, and entered a coma-like state following the accident. Vega played in Chi’s place at Bamboozle Left with Deftones, and continued to fill in for him as Cheng’s condition remained the same. When his accident occurred, Deftones had just finished writing and recording songs for what was to be their sixth studio-album, Eros, although they decided to shelve the album indefinitely. This decision was made due to Cheng’s condition, and also was a creative decision, as the band stated that they didn’t feel that Eros “best encompassed who they were currently as people or as musicians”. Deftones began writing a new album from scratch in June 2009 with Vega on bass. The album, titled Diamond Eyes, was released on May 4, 2010. In November 2012 the group released their second album with Vega, named Koi No Yokan. According to Deftones frontman Chino Moreno, Vega made a bigger contribution to Koi No Yokan than he did to Diamond Eyes.[5]

In June 2012, Sergio and Quicksand would secretly reunite to play a surprise set at Revelation Records’ 25th anniversary show. This performance was followed by an appearance on the Jimmy Fallon Show as well as two sold out headlining shows at The Bowery Ballroom and The Music Hall of Williamsburg in August 2012. Quicksand would later act as one of the headliners at California’s FYF set. In January 2013, Quicksand embarked on their first tour since the late 1990s. 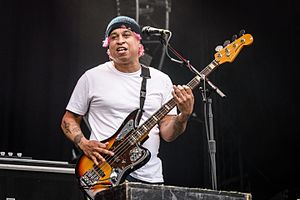 With Quicksand, Vega played a variety of basses. For his first two albums after joining Deftones, Vega used Fender Jaguar Basses exclusively (tuned CGCF, C#G#C#F#, Drop D, or standard E, depending on the song). Starting with the album Gore Vega used a Fender Bass VI on several tracks on the album such as ‘Heart/Wires’. He plays bass with a pick as opposed to with his fingers.

His amplifier is an Ampeg SVT Classic Reissue. His effects include Native Instruments Guitar Rig 3 software and a Tech 21 SansAmp Bass Driver DI. According to the Fractal Audio Facebook page, Vega is also using the Axe FX Ultra Preamp. His rig was completely changed in 2013, with the Fractal Axe-FX II being the main unit for his sounds, along with a Matrix GT1000FX power amp and 2 Orange 8×10 speaker cabinets for amplification.