Clifford “Cliff” Williams (born 14 December 1949) is a British musician who was a member of the Australian hard rock band AC/DC as their bassist and backing vocalist from 1977 to 2016. He had started his professional music career in 1967 and was previously in the British groups Home and Bandit. His first studio album with AC/DC was Powerage in 1978. The band, including Williams, was inducted into the American Rock and Roll Hall of Fame in 2003. Williams’s playing style is noted for basic bass lines which follow the rhythm guitar. Williams’ side projects, while a member of AC/DC, include benefit concerts and playing with Emir & Frozen Camels on their album San (2002) and a European tour. In 2016, Williams announced his retirement from the music industry after AC/DC’s Rock or Bust World Tour.

Clifford Williams was born on 14 December 1949 in Romford, Essex, on the outskirts of London.[1][2] The Williams family moved to Hoylake, near Liverpool, in 1961, where he was influenced by the local Merseybeat movement and decided to become a rock musician.[2][3] At the age of 13, he and some friends formed a band.  Williams has listed The Rolling Stones, The Who, The Kinks and blues musicians such as Bo Diddley as influences for his style. He mostly learned to play bass guitar by “listening to records and picking out notes”, with formal training limited to some lessons from a professional Liverpool bassist. Williams left school when he was 16 years old, becoming an engineer by day and musician by night.

In 1966, Williams became a professional musician and moved back to London, where he worked at a demolition site and in supermarkets, and played in short-lived bands. Williams met guitarist Laurie Wisefield (later a member of Wishbone Ash), and the two became members of a band, Sugar, which soon broke up.

In 1970, Williams and Wisefield joined with singer Mick Stubbs, keyboardist Clive John and drummer Mick Cook to form the progressive rock group Home. The band signed a recording deal with Epic Records and issued their debut LP, Pause for a Hoarse Horse, in 1971. Home was a supporting act for Jeff Beck, Mott the Hoople, The Faces and Led Zeppelin. In 1972, Jim Anderson replaced John on keyboards and Home released a self-titled album, featuring their only hit single, “Dreamer”, which peaked at No. 41 in the UK album charts. Their next album, The Alchemist, followed in 1973, but did not gain chart success. When British folk singer-songwriter Al Stewart suggested that Home back him on his first American tour in March 1974, Mick Stubbs left the group. The rest of the members became the Al Stewart Band, but split up after the tour. 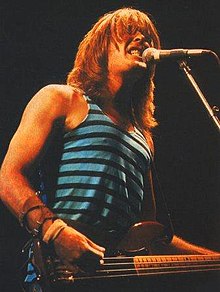 Williams performing with AC/DC in 1981.

Williams considered retiring from music following Bandit’s breakup, but one of the group’s guitarists, Jimmy Litherland, convinced him to audition for the Australian group AC/DC, who were looking for a bassist after firing Mark Evans shortly after recording their 1977 studio album Let There Be Rock. AC/DC had formed in Australia in 1973 and by mid-1977 the line-up was Malcolm Young on rhythm guitar and backing vocals alongside his brother Angus Young on lead guitar, Phil Rudd on drums and Bon Scott on vocals. Shortly after deciding to audition for the band, Williams saw AC/DC on Top of the Pops and was impressed, describing them as “outrageous”.

For his audition, Williams played four jam sessions with the band, and on 27 May 1977 was officially asked to join AC/DC. Angus declared the decision was partially motivated by the bassist’s good looks, which the band hoped would attract more women to their concerts. As Williams was replacing an Australian musician, there were issues resulting in problems obtaining a work permit to enter the country. His first performances with AC/DC were in Australia supporting the Let There Be Rock album, with two secret gigs at Sydney’s Lifesaver. The album Powerage (1978), produced by Vanda & Young, marked Williams’s studio debut. Williams remained in AC/DC from that time onwards until 2016, with only a temporary departure in 1991 as he suffered a kidney infection, during which Paul Greg had to play bass for some North American concerts in the Razors Edge World Tour. In addition to his role as bassist with AC/DC, Williams also contributed backing vocals. He has said that his favourite albums with the band are Powerage and Back in Black. 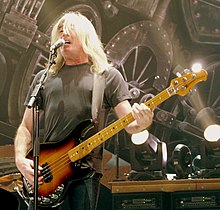 On July 7, 2016, Williams announced his plans to retire from the music industry following AC/DC’s Rock or Bust World Tour, a tour whose final concert was set for September of that year. He cited his feeling that AC/DC was now “a changed animal” with the recent departures of several band members. Malcolm Young could no longer contribute due to dementia, Phil Rudd could not tour due to being under house arrest, and vocalist Brian Johnson was forced into retirement due to hearing problems.

Since Williams’ introduction to the band, AC/DC has been inducted to the Australian Recording Industry Association’s Hall of Fame (in 1988), and the Rock and Roll Hall of Fame (in 2003). In 1982, Williams was chosen as “Bassist of the Year” in a vote conducted by Kerrang! magazine.

Williams’ wife, Georganne, is from the US state of Colorado. The couple have two children: Erin (born 1985) who is a model-actress under the name Erin Lucas, and Luke (born 1986).

After marrying in 1980, the couple stayed in the United States, initially settling in Hawaii. The islands left the Williams’ feeling too isolated, and they found the school system there to be lacking. In 1986, they moved to Fort Myers, Florida, following a suggestion from AC/DC bandmate Brian Johnson, who lives in nearby Sarasota. Williams also spends time in Aix-en-Provence among distant relatives, including local French guitar player Noah Tchenio.

Williams’ hobbies include fishing  and amateur flying. He is an oenophile.

In 1984, Williams played bass and backing vocals on Adam Bomb’s song “I Want My Heavy Metal”, for the album Fatal Attraction. During AC/DC’s hiatus in the 2000s, Williams joined Bosnian musician Emir Bukovica’s band Emir & Frozen Camels. The group recorded the album San in 2002 and played in some European clubs. In 2005, Williams and AC/DC singer Johnson played in a hurricane relief event in Florida, promoted by the John Entwistle Foundation. There Williams met drummer Steve Luongo, president of the foundation and former member of the John Entwistle band. Luongo later brought Williams, Johnson, and guitarist Mark Hitt for the Classic Rock Cares charity project. The quartet composed and recorded ten tracks in the studio in 2007, and followed that with a tour to raise funds for the foundation.[ In 2011, Williams played on a benefit concert organized by Mark Farner. Williams said he also occasionally plays with a rhythm and blues band from Fort Myers called The Juice.

“It’s not the line that counts. It is the feel. My favorite AC/DC tune to play is ‘Down Payment Blues’, because it’s so simple. I play four notes throughout the song, but I get off on the whole thing—not me noodlin’ away.”

—Williams on his playing

Williams’s role in AC/DC was to provide steady but basic bass lines which followed the rhythm guitar of Malcolm Young, consisting mostly of eighth notes. His basslines were sometimes written by Malcolm and Angus Young during composition, and at other times Williams developed them based on the other instrumental tracks. Williams said he plays “the same thing in every song, for the most part. In AC/DC’s music, the song is more important than any individual’s bit in it.” He added that “complex [bass] lines wouldn’t add anything to a guitar-oriented band like ours, so I try to create a bottom layer that drives what our guys are doing on top.” Williams had no difficulty keeping his low profile within the band, declaring that “I don’t have any problem doing this, because I enjoy playing simply. I never feel angry or prisoner.” His playing technique was mostly centred around downpicking, with occasional use of plucking to mute the strings, which he says “adds more definition and tightens up the notes, and it gives the sound less sustain”.

In his first appearance in 1977, he used a Gibson Ripper only for the “Let There Be Rock” music video. Cliff Williams’ trademark instrument is the StingRay and other basses by Music Man, strung with D’Addario (.045, .065, .085, .105) flatwounds in the studio and roundwound XLs in concert. Williams states that despite trying other basses over the years, he always went back to Music Man’s instruments, which he described as “a tremendous work horse of a bass”. Other basses used include the Fender Precision Bass, a Gibson Thunderbird non-reverse, Fender Jazz Bass, the Steinberger L-series, a Gibson EB-3 and at least two LAG Custom basses. Williams used 3 Ampeg SVT-810E cabinets with 2 SVT-4PRO Heads, but if there was any interference with the wireless systems, he used cables in his live performances.