D’arcy Elizabeth Wretzky-Brown (born May 1, 1968) is an American musician. She is best known for her work as the original bass player of the alternative rock band The Smashing Pumpkins.

Wretzky was born and raised in South Haven, Michigan, where her mother, a musician working as a lounge singer, encouraged D’arcy and her sisters to perform music. Growing up, she played the violin and oboe, and performed in choirs. She also performed gymnastics. Wretzky intended to start a musical career since she was 10 years old. She would later refer to her father, a pipefitter with a love of horseback riding, as “a very strange man.” The young Wretzky was a self-described “tomboy,” and had a contentious relationship with her sister. Wretzky suffered from severe stage fright during her childhood. She attended South Haven’s L.C. Mohr High School, where she grew interested in post-punk and played in cover bands. After high school, she moved to France to join a band, but the band had already disbanded upon her arrival, prompting her to return to the United States. She then moved to Chicago and spent the summer living with friends and attending concerts Wretzky stated that she is a self-taught bass player.

After a concert at a local rock club, Wretzky overheard Billy Corgan criticizing the band that had performed. An argument and discussion followed, and Corgan recruited her into his band, the nascent Smashing Pumpkins, which, at the time, was merely Corgan, James Iha, and a drum machine. Wretzky accepted, and Jimmy Chamberlin completed the lineup a few months later, after Joe Shanahan encouraged Corgan to add a live drummer.

Wretzky is the credited bassist on the Smashing Pumpkins’ first five studio albums: Gish, Siamese Dream, Mellon Collie and the Infinite Sadness, Adore, and Machina/The Machines of God. It was confirmed by both her and Corgan, however, that Corgan played the bass tracks for Siamese Dream because he could complete them in far fewer takes. Wretzky often contributed backing vocals in concert, and on studio albums. She contributes vocally in some Smashing Pumpkins songs including “Daydream” from Gish, many songs on Siamese Dream, “1979”, “Cupid De Locke”, “Farewell and Goodnight”, “Beautiful”; “Where Boys Fear To Tread” from Mellon Collie, and “Dreaming” and “The Bells” from The Aeroplane Flies High. Wretzky also co-wrote one Smashing Pumpkins song, “Daughter”. 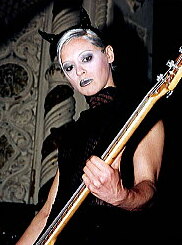 Wretzky playing bass guitar with the Smashing Pumpkins during the Adore era (circa April 1998).

Wretzky’s time in the band was marked by alternating periods of happiness and discomfort. Corgan considered her the “moral authority” and “moral conscience” of the band. In the aftermath of the success of 1995’s Mellon Collie and the Infinite Sadness, Corgan said she began an “apparent slow descent into insanity and/or drugs (take your pick).” After the short nine date “The Arising!” tour in April 1999 which saw all four original members performing together for the first time since 1996, Wretzky decided to leave the band with intentions of pursuing an acting career. The band was recording Machina/The Machines of God at the time and consequently she performed very few bass parts on the album. Most of the bass parts were handled by Corgan himself. Shortly after leaving the group, she was arrested for possession of crack cocaine. Corgan later said she was “fired for being a mean spirited drug addict who refused to get help.” She was replaced on 2000s Machina tour by former Hole bassist Melissa Auf der Maur.

Wretzky did not participate in the Smashing Pumpkins’ reunion. In 2008, she and her former bandmate James Iha filed a lawsuit against Virgin Records for selling ringtones of Smashing Pumpkins songs without their consent.

Wretzky is a Sci-Fi fan of both Star Trek and the X-Files. She has stated that space travel and aliens are a recurring influence on her creative ideas, and still a possible influence on acting aspirations and the talked about future plans for a solo album.

After many years out of the spotlight, Wretzky resurfaced in July 2009 by calling in unexpectedly on Chicago’s Q101 FM with Ryan Manno. During the interview, she stated that she was not healthy enough to be a musician, and repeatedly professed her admiration for Monkees frontman Davy Jones who was known to be an early romantic crush of Darcy’s. She also discussed her appreciation for the band Silversun Pickups who have a sound influenced by the early Gish era of The Smashing Pumpkins . She also mentioned that she then lived on a farm in Michigan, that she had briefly lived in Austin, Texas, sometime during the previous decade, and that former fiancé Wendell Green had died.

Wretzky was jailed in February 2011 for missing four court dates related to a ticket she received for failing to control her horses. She spent six days in jail. She was also arrested on February 7, 2011, on a misdemeanor drunken-driving charge in South Haven, Michigan.

In 2013, Wretzky’s relationship with Corgan remained tense. In September 2014, she tried to re-establish contact with him.

In 2016, Wretzky revealed that she is working on her own music, release dates or recording still remains unknown as of 2017.

In August 2016, Billy Corgan posted a video to Facebook acknowledging that he and Wretzky had recently reestablished communication saying “I’ve been in communication with D’arcy for the first time in 16 or 17 years, it’s awesome to have my friend back.” Corgan emphasized that this did not necessarily mean the band was getting back together instead insisting “my primary interest in the old band was us having good relationships again.”

Wretzky joined the band Catherine as a second vocalist for their final album Hot Saki and Bedtime Stories. She also appeared in the video for Four Leaf Clover. At the time, Wretzky was married to Catherine member Kerry Brown.

Wretzky contributed vocals to the track “One and Two” on James Iha’s 1998 solo album, Let It Come Down.

In 1999, she contributed vocals on two Filter songs, “Cancer” and the big international hit “Take A Picture”. During this time, she worked with cellist Eric Remschneider, whom she had worked with when he had recorded with the Smashing Pumpkins.

In May 2016 in an interview with Loudwire, Filter lead singer Richard Patrick spoke of a romantic relationship he had with Wretzky saying she was the subject of a song he wrote called “Miss Blue”