Winwood was a key member of The Spencer Davis Group, Traffic, Blind Faith and Go. He also had a successful solo career with hits including “While You See a Chance,” “Valerie,” “Back in the High Life Again” and two US Billboard Hot 100 number ones: “Higher Love” and “Roll with It.” He was inducted into the Rock and Roll Hall of Fame as a member of Traffic in 2004.

In 2005, Winwood was honoured as a BMI Icon at the annual BMI London Awards for his “enduring influence on generations of music makers.” In 2008, Rolling Stone ranked Winwood #33 in its 100 Greatest Singers of All Time. Winwood has won two Grammy Awards. He was nominated twice for the Brit Award for Best British Male Artist: 1988 and 1989.

Like Eric Clapton, he has been part of many bands, including Traffic, the Spencer Davis Group, and Blind Faith (along with Eric Clapton).

Stephen Lawrence Winwood was born in Handsworth, Birmingham. His father, Lawrence, a foundryman by trade, was a semi-professional musician, playing mainly the saxophone and clarinet. Young Winwood became interested in swing and Dixieland jazz as a boy, began playing piano at age four, and also soon started playing drums and guitar. He first performed with his father and older brother, Muff, in the Ron Atkinson Band at the age of eight. Muff later recalled that when Steve began playing regularly with his father and brother in licensed pubs and clubs, the piano had to be turned with its back to the audience to try and hide him, because he was so obviously underage. Winwood was a choirboy at St John’s Church of England, Perry Barr. He later admitted to having “sneaked a few plays” of the organ there. While he was still young the family moved from Handsworth to the semi-rural suburb of Great Barr at the northern edge of the city. Winwood attended the Great Barr School which was one of the first comprehensive schools, where a teacher recalled him being a conscientious and able student who displayed ability in mathematics. He also attended the Birmingham and Midland Institute of Music to develop his skills as a pianist, but did not complete his course.

While still a pupil at Great Barr School Winwood was a part of the Birmingham rhythm and blues scene, playing the Hammond B-3 organ and guitar, backing blues singers such as Muddy Waters, John Lee Hooker, T-Bone Walker, Howlin’ Wolf, B.B. King, Sonny Boy Williamson II, Eddie Boyd, Otis Spann, Chuck Berry and Bo Diddley on their United Kingdom tours, the custom at that time being for US singers to travel solo and be backed by pickup bands. At this time, Winwood was living on Atlantic Road in Great Barr, close to the Birmingham music halls where he played. Winwood modelled his singing after Ray Charles.

Winwood joined the Spencer Davis Group at age 14, along with his older brother, Muff, who later had success as a record producer. Steve’s distinctive high tenor singing voice and vocal style drew comparisons to Ray Charles. At the end of 1965 the group had their first number one single with “Keep On Running” and the money from this success allowed Winwood to buy his own Hammond B-3 organ.

During this time Winwood joined forces with guitarist Eric Clapton as part of the one-off group Eric Clapton and the Powerhouse. Songs were recorded for the Elektra label, but only three tracks made the compilation album, What’s Shakin’. Winwood co-wrote and recorded the hits “Gimme Some Lovin'” and “I’m a Man” before leaving the Spencer Davis Group. Winwood met drummer Jim Capaldi, guitarist Dave Mason, and multi-instrumentalist Chris Wood when they jammed together at The Elbow Room, a club in Aston, Birmingham. After Winwood left the Spencer Davis Group in April 1967, the quartet formed Traffic.[13] Soon thereafter, they rented a cottage near the rural village of Aston Tirrold, Berkshire (now Oxfordshire) to write and rehearse new music. The period at the cottage proved important in the band’s development.

Early in Traffic’s formation, Winwood and Capaldi formed a songwriting partnership, with Winwood writing music to match Capaldi’s lyrics. This partnership was the source of most of Traffic’s material, including popular songs such as “Paper Sun” and “The Low Spark of High-Heeled Boys,” and outlived the band, producing several songs for Winwood and Capaldi’s solo albums. Over the band’s history, Winwood performed the majority of their lead vocals, keyboard instruments, and guitars. He also frequently played bass and percussion up to and including the recording sessions for their fourth album.

Winwood formed the supergroup Blind Faith in 1969 with Eric Clapton, Ginger Baker and Ric Grech. The band was short-lived owing to Clapton’s greater interest in Blind Faith’s opening act Delaney & Bonnie & Friends—Clapton left the band at tour’s end. However, Baker, Winwood and Grech stayed together to form Ginger Baker’s Air Force. The lineup consisted of 3/4 of Blind Faith (without Clapton, who was replaced by Denny Laine), 2/3 of Traffic (Winwood and Chris Wood, minus Capaldi) plus musicians who interacted with Baker in his early days, including Phil Seamen, Harold McNair, John Blood and Graham Bond. However, the project turned out to be just another short-lived one. Winwood soon went into the studio to begin work on a new solo album, tentatively titled Mad Shadows. However, Winwood ended up calling in Wood and Capaldi to help with session work, which prompted Traffic’s comeback album John Barleycorn Must Die in 1970. In 1972, Winwood recorded the part of Captain Walker in the highly successful orchestral version of The Who’s Tommy. He recorded a 1973 album with Remi Kabaka, Aiye-Keta, for Antilles Records, and in 1976 provided vocals and keyboards on Go, a concept album by Japanese composer Stomu Yamashta. In 1976, Winwood also played guitar on the Fania All Stars’ Delicate and Jumpy record and performed as a guest with the band in their only UK appearance, a sold-out concert at the Lyceum Theatre, London.

Weariness with the grind of touring and recording prompted Winwood to leave Traffic and retire to sessioning for some years.[16] Under pressure from Island Records, he resurfaced with his self-titled first solo album in 1977. This was followed by his 1980 hit Arc of a Diver (which included his first solo hit, “While You See a Chance”) and Talking Back to the Night in 1982. Both albums were recorded at his home in Gloucestershire with Winwood playing all instruments. He continued to do sessions during this period, and in 1983 he co-produced and played on Jim Capaldi’s top 40 hit “That’s Love” and co-wrote the Will Powers top 20 hit “Kissing with Confidence.”

In 1986 he moved to New York. There he enlisted the help of a coterie of stars to record Back in the High Life in the US, and the album was a hit. He topped the Billboard Hot 100 with “Higher Love,” and earned two Grammy Awards: for Record of the Year and Best Male Pop Vocal Performance. Winwood embarked on an extensive tour of North America in support of the album.[17]

All these albums were released on Island Records. However, at the peak of his commercial success, Winwood moved to Virgin Records and released Roll with It and Refugees of the Heart. The album Roll with It and the title track hit #1 on the USA album and singles charts in the summer of 1988. Another album with Virgin, Far from Home, was officially credited to Traffic, but nearly all the instruments were played by Winwood. Despite lacking a significant hit, it broke the top 40 in both the UK and USA. His final Virgin album Junction Seven also broke the UK top 40.

A new studio album, Nine Lives, was released 29 April 2008 by Wincraft Music through Columbia Records. The album opened at #12 on the Billboard 200 album chart, his highest US debut ever. In 2008, he was awarded an honorary doctorate from the Berklee College of Music to add to his honorary degree from Aston University, Birmingham. On 28 March 2012 Winwood was one of Roger Daltrey’s special guest stars for “An Evening with Roger Daltrey and Friends” gig, in aid of the Teenage Cancer Trust at the Royal Albert Hall. In 2013 Winwood toured North America with Rod Stewart as part of the “Live the Life” tour. In 2014, Winwood toured North America with Tom Petty & The Heartbreakers. 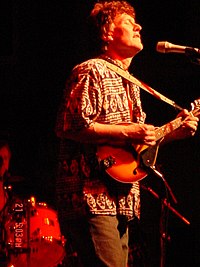 In 1994, Capaldi and Winwood reunited Traffic for a new album, Far From Home, and a tour, including a performance at Woodstock ’94 Festival. That same year, Winwood appeared on the A Tribute To Curtis Mayfield CD, recording Mayfield’s “It’s All Right.” In 1995 and 1996, Winwood released Reach for the Light for the animated film Balto. In 1997, Winwood released a new album, Junction Seven, toured the US and sang with Chaka Khan at the VH-1 Honors. In 1998, Winwood joined Tito Puente, Arturo Sandoval, Ed Calle and other musicians to form the band “Latin Crossings” for a European tour, after which they split without making any recordings. Winwood also appeared in the film Blues Brothers 2000, as a member of the Louisiana Gator Boys, appearing on stage with Isaac Hayes, Eric Clapton, and KoKo Taylor at the battle of the bands competition.

In 2003, Winwood released a new studio album, About Time on his new record label, Wincraft Music. 2004 saw his 1982 song “Valerie” used by Eric Prydz in a song called “Call on Me.” It spent five weeks at #1 on the UK singles chart. Winwood heard an early version of Prydz’s remix and liked it so much, he not only gave permission to use the song, he re-recorded the samples for Prydz to use.

In 2005, his Soundstage Performances DVD was released, featuring recent work from the About Time album along with prior hits including “Back in the High Life.” Winwood also performed hits from his days with Traffic as well as current recordings. In 2005, he accepted an invitation from 2008 Grammy Award winner Ashley Cleveland to appear on her album Men and Angels Say. This album of rock, blues and country arrangements of well known hymns includes “I Need Thee Every Hour”—which features a vocal duet and organ performance. Christina Aguilera features Winwood (using the piano and organ instrumentation from the “John Barleycorn” track, “Glad”) on one of her songs from her 2006 record Back to Basics, called “Makes Me Wanna Pray.” 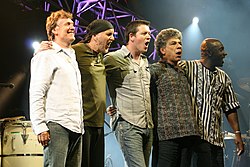 The Steve Winwood Band in 2009 on tour

In May 2007, Winwood performed in support of the pro-fox hunting organisation the Countryside Alliance in a concert at Highclere Castle, joining fellow rock artists Bryan Ferry, Eric Clapton, Steve Harley and Kenney Jones. In July 2007, Winwood performed with Clapton in the latter’s Crossroads Guitar Festival. Among the songs they played together were “Presence of the Lord” and “Can’t Find My Way Home” from their Blind Faith days. Winwood played several guitar leads in a six-song set. The two continued their collaboration with three sold-out nights at Madison Square Garden in New York City in February 2008. On 19 February 2008 Winwood and Clapton released a collaborative EP through iTunes titled Dirty City. Clapton and Winwood released a CD and DVD of their Madison Square Garden shows and then toured together in the summer of 2009.

Between 1978 and 1986 Winwood was married to Nicole Weir (d. 2005), who had contributed background vocals to some of his early solo work. The two married at Cheltenham Register Office.

Winwood now lives in Nashville, Tennessee, USA with his wife Eugenia Crafton, whom he married in 1987. They have four children and own a 300-year-old manor house in the Cotswolds, Gloucestershire, England. His daughter Lilly Winwood is a singer; she was featured with him performing a duet of his song “Higher Love” in a Hershey commercial.

Winwood at the Hangout Music Festival, May 2012