Tal Wilkenfeld (bornDecember 2, 1986) is an Australian bass guitarist who has gained worldwide attention performing alongside some of rock and jazz music’s most notable artists. In addition to her work as a supporting musician to Jeff Beck, Chick Corea, Herbie Hancock and others, she has assumed the role of bandleader of her own eponymous bands, whose musicians have included Wayne Krantz, Keith Carlock, John Beasley and Vinnie Colaiuta. In 2008, Wilkenfeld was voted “The Year’s Most Exciting New Player” in a Bass Player magazine readers’ choice poll.

Wilkenfeld began playing guitar when she was fourteen years old. Two years later in 2002, she dropped out of high school, in Sydney, saying that “it just wasn’t going to work for me”, and emigrated to the United States where she studied electric guitar. Within a year she had switched to electric bass. Wilkenfeld graduated from Los Angeles Music Academy College of Music in 2004. After a few months she accepted an endorsement from Sadowsky Guitars, and devoted herself to forming a band and composing songs of her own. In 2004, at age 18, she moved to New York City and began making a name for herself in New York’s jazz clubs. “I was actually walking around to like several clubs every night till the sun came up, sitting in at jazz clubs just learning. I was really the only one that would go into these clubs with an electric bass, because these were like, you know, places that played exclusively bebop. So I got some funny looks for quite some time. But it was a priceless education.” In 2006 while playing at one of the clubs in New York, Wilkenfeld met some members of The Allman Brothers Band. “Oteil Burbridge heard me first, and then Derek Trucks heard me. And those two then just encouraged me to go on with them at the Beacon Theater.” It was her first time on the big stage. “Oteil just handed me his bass at the beginning of “Elizabeth Reed” and literally just ran into the audience and was watching me in the audience, smiling.” The jam lasted around 40 minutes and Wilkenfeld sent a recording of the performance to Jeff Beck when she auditioned for his band.

In 2006 Wilkenfeld performed as a guest with The Allman Brothers Band and recorded her entire debut album, Transformation in just two days when she was 20 years old. Wilkenfeld composed, produced, arranged and played bass on seven intricate tunes with Wayne Krantz, Geoffrey Keezer, saxophonist Seamus Blake and Keith Carlock. 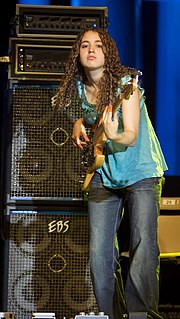 Upon learning that Chick Corea was seeking a bassist for an upcoming tour, Wilkenfeld sent him demos of Transformation. She was elated to be selected to accompany him on his Australian tour[1] in early 2007, along with Frank Gambale and Antonio Sanchez. A few months later she joined Jeff Beck, Vinnie Colaiuta and Jason Rebello for Jeff Beck’s summer European tour. After returning from Europe the group completed their tour at Eric Clapton’s 2007 Crossroads Guitar Festival in Chicago, Illinois, performing to a sell-out crowd of approximately 40,000 people. By November 2007 Wilkenfeld had rejoined Jeff Beck and the other band members for a week-long residency at Ronnie Scott’s Jazz Club in London. Jeff Beck selected that venue to record a new DVD and CD, with guests that included Eric Clapton, Joss Stone and Imogen Heap. It was recorded, filmed, and then released as Live at Ronnie Scott’s. On the same trip, Wilkenfeld joined Herbie Hancock, Wayne Shorter, singer Corinne Bailey Rae and drummer Vinnie Colaiuta on a session filmed for the A&E series, Live from Abbey Road. Wilkenfeld wrapped up 2007 with two standing-room-only Greenwich Village gigs with Krantz. 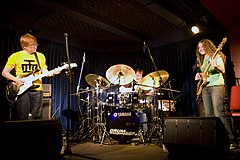 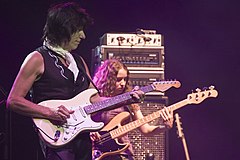 Beck with Wilkenfeld during her tour with Beck at the 2007 Crossroads Guitar Festival in Chicago, Illinois

In 2008 Wilkenfeld accompanied Krantz on gigs in Los Angeles before embarking on a tour of Australia with Krantz and Carlock in the fall – a reunion of the core band that appeared on Transformation. At the conclusion of the tour, Krantz and Carlock, along with John Beasley backed Wilkenfeld during her headlining set for Bass Player LIVE! 2008, in Los Angeles. In July she accompanied Jeff Beck in a tribute to George Martin concert in Los Angeles. She appeared at Warren Haynes’s 20th Annual Christmas Jam, reuniting with The Allman Brothers Band and guesting with Gov’t Mule, Ivan Neville and Robben Ford.

At the start of 2009, Wilkenfeld toured Australia and Japan with Beck, who commented in an interview; “It’s interesting to have some amazing players in my band like Tal, who is about, you know half, a quarter of the age of either Vinnie or me. She’s a genius. She will pick up mistakes that we, even Vinnie and I, miss. So she’s a great anchor as well.” Weeks later they went on to tour in the United States, beginning at Beck’s induction into the Rock and Roll Hall of Fame where they played “Beck’s Bolero” and were joined by Led Zeppelin’s Jimmy Page on “Immigrant Song”. Beck recalled:

“When I was inducted we were going to have Jimmy Page come on and play ‘(Beck’s) Bolero’. But I didn’t think it would be right for him to be playing rhythm guitar all the way through that one number. Then the phone rang and it was Tal Wilkenfeld, my then bass player. She was on the way down in the elevator and told me we should play “Immigrant Song”. We were going on in ten minutes and had no time to rehearse. She said ‘Oh, when you stop in the middle of ‘Bolero’, when the rhythm changes, we’ll kick in to “Immigrant Song”‘. “That’s what I like – right on the hoof. Nobody knew, the lighting and sound guys didn’t know, the organizers didn’t know. I just grabbed the microphone and shouted, ‘Jimmy Paaaage’ and went straight into the song. I loved that. That’s what you call dangerous, that’s living on your reflexes.”

The DVD including this performance, Rock and Roll Hall Of Fame: Legends was released in 2010. In the few weeks’ break between touring Japan and America, Wilkenfeld performed with The Roots on Late Night with Jimmy Fallon, and then embarked on Beck’s summer tour through Europe, Canada and the UK. During the UK run David Gilmour sat in with the group during a special performance at the Royal Albert Hall.

In October Wilkenfeld reunited with Beck at Madison Square Garden for the Rock and Roll Hall Of Fame’s 25th Anniversary two-night concert. The set included guests Buddy Guy on “Let Me Love You Baby”, Sting singing “People Get Ready” and Billy Gibbons on “Foxey Lady”. The 25th Anniversary Rock and Roll Hall Of Fame Concerts DVD, featuring these performances along with “Big Block”, “A Day in the Life” and “Freeway Jam”, was released in 2010. In addition Wilkenfeld was featured on four tracks on Beck’s new album Emotion & Commotion, leading Bass Player magazine to write; “Wilkenfeld powers four tracks with present, prescient parts; this includes “Serene,” with her ear-grabbing fills and brief but bright solo.”

After three years with Beck, Wilkenfeld returned to composing and recording as a solo artist. While working in Los Angeles she was asked to contribute to Herbie Hancock’s The Imagine Project on “A Change is Gonna Come” and “Don’t Give Up”, to Macy Gray’s The Sellout on “That Man” and to Lee Ritenour’s Six String Theory on “68”, “In your Dreams”, “Give Me One Reason” and Guthrie Govan’s song “Fives”, which features a solo by Wilkenfeld. On 23 May 2010 she appeared in The Baked Potato’s 40th anniversary show at the Ford Amphitheater with Steve Lukather’s band and in June and July accompanied Herbie Hancock on dates across the U.S., Canada and Europe to promote the new release on which she had played. This short tour included a special show at Carnegie Hall to celebrate Hancock’s 70th birthday.

Wilkenfeld opened for The Who on the North American part of The Who Hits 50! tour starting in Detroit, Michigan on 27 February 2016. Wilkenfeld also headlined her own shows scheduled on days between The Who concerts starting in Toronto, Ontario on 29 February 2016.