Martina Michèle “Tina” Weymouth (born November 22, 1950) is an American musician, best known as a founding member and bassist of the new wave group Talking Heads and its side project Tom Tom Club, which she co-founded with husband and Talking Heads drummer, Chris Frantz.

Born in Coronado, California, Weymouth is the daughter of retired US Navy Vice Admiral Ralph Weymouth and his wife Laura Bouchage. She has seven siblings, including Lani and Laura Weymouth, who are collaborators in Weymouth’s band Tom Tom Club, and architect Yann Weymouth, the designer of the Salvador Dalí Museum. Weymouth is of French heritage on her mother’s side (she is the great-granddaughter of Anatole Le Braz, a Breton writer). She was a cheerleader in high school. As a bass guitarist, she combined the minimalist art-punk bass lines of groups such as Wire and Pere Ubu with danceable, funk-inflected riffs to provide the bedrock of Talking Heads signature sound. Her sound is often very syncopated (i.e. reggae/funk) in feel, combining low fundamental notes with higher flourishes in clipped, staccato rhythms. She joined Talking Heads as bass guitarist at the request of her boyfriend of the time, Chris Frantz.

Full members of the Compass Point All Stars, Weymouth and Frantz formed the Tom Tom Club in 1980, which kept them busy during a fairly long hiatus in Talking Heads activity. When it became obvious that Talking Heads frontman David Byrne had no interest in another Talking Heads album, Weymouth, Frantz, and Jerry Harrison reunited without him for a single album called No Talking, Just Head under the name “The Heads” in 1996, featuring a rotating cast of vocalists. Weymouth has been critical of Byrne, describing him as “a man incapable of returning friendship.” 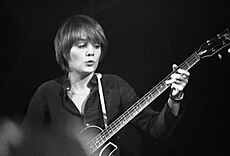 She also co-produced the Happy Mondays’ 1992 album Yes Please! and has contributed backing vocals and percussion for the alternative rock virtual band Gorillaz; the backing vocals were provided for the character Noodle.

Weymouth was a judge for the second annual Independent Music Awards to support independent artists’ careers. She collaborated with Chicks on Speed on their cover of the Tom Tom Club’s “Wordy Rappinghood” for their album 99 Cents in 2003 along with other female musicians such as Miss Kittin, Kevin Blechdom, Le Tigre, and Adult.’s Nicola Kuperus. “Wordy Rappinghood” became a moderate dance hit in Europe, peaking at number two in the Dutch Top 40, number five on the Belgian Dance Chart, and at number sixty-six on the UK Singles Chart.

Tina Weymouth and Chris Frantz have been married since 1977. They live in Fairfield, Connecticut, and have two sons, Robin and Egan. Her niece, Katharine Weymouth, served as publisher of The Washington Post.