Clifford Lee “Cliff” Burton was an American musician, best known as the second bass guitarist for the American thrash metal band Metallica from December 1982 until his death in September 1986.

Burton joined Metallica in 1982 and performed on the band’s first three studio albums: Kill ‘Em All, Ride the Lightning and Master of Puppets. He also received a posthumous writing credit for the song “To Live Is to Die” from the band’s fourth studio album, …And Justice for All.

On September 27, 1986, Burton died in a bus accident in Kronoberg County, a rural area of southern Sw

eden, as the band was touring in support of the Master of Puppets album. Burton was replaced by bassist Jason Newsted the following month. He was also posthumously inducted into the Rock and Roll Hall of Fame with Metallica on April 4, 2009. He was selected as the ninth greatest bassist of all time in an online reader poll organized by Rolling Stone magazine in 2011.

Clifford Lee Burton was born in Castro Valley, California, to Ray and Jan Burton. He had two elder siblings, Scott and Connie, and a niece, Nicole. Burton’s interest in music began when his father introduced him to classical music and he began taking piano lessons.

In his teenage years, Burton had an interest in rock, classical, and eventually heavy metal. He began playing the bass at age 13, after the death of his brother. His parents quoted him as saying, “I’m going to be the best bassist for my brother.” He practiced up to six hours per day (even after he joined Metallica). Along with classical and jazz, Burton’s other early influences varied from southern rock and country to the blues.

While still a student at Castro Valley High School, Burton formed his first band called EZ-Street. The band took its name from a Bay Area topless bar. Other members of EZ Street included future Faith No More guitarist “Big” Jim Martin as well as Faith No More and Ozzy Osbourne drummer Mike Bordin. Burton and Martin continued their musical collaboration after becoming students at Chabot College in Hayward, California. Their second band, Agents of Misfortune, entered the Hayward Area Recreation Department’s Battle of the Bands contest in 1981. Their audition was recorded on video and features some of the earliest footage of Burton’s trademark playing style. The video also shows Burton playing parts of what would soon be two Metallica songs: his signature bass solo, “(Anesthesia) – Pulling Teeth”, and the chromatic intro to “For Whom the Bell Tolls”. Burton joined his first major band, Trauma, in 1982. Burton recorded the track “Such a Shame” with the band on the second Metal massacre compilation.

In 1982, Trauma traveled to Los Angeles to perform at the Whisky a Go Go. Among those in attendance were James Hetfield and Lars Ulrich, both members of Metallica, which had formed the previous year. Upon hearing, as Hetfield described it, “this amazing shredding” (which later became “(Anesthesia) – Pulling Teeth”), the two went in search of what they thought was an amazing guitar player. When they learned that what they had heard was a bass solo by Burton, they decided to recruit him for their own band. They asked him to replace departed bassist Ron McGovney, and since Burton thought that Trauma was “starting to get a little commercial”, he agreed. The idea of having to move to Los Angeles did not sit well with him, and said he would join only if the band would relocate from Los Angeles to his native San Francisco Bay Area. Metallica, eager to have Burton in the band, left their origin of Los Angeles to make a home in El Cerrito, a town located across the bay from San Francisco.

Burton’s first recording with Metallica was the Megaforce demo. A demo tape the band had made prior to Burton’s joining, No Life ’til Leather, managed to come into the hands of John Zazula, owner of Megaforce Records. The band relocated to Old Bridge, New Jersey and quickly secured a recording contract with Zazula’s label. Its debut album, Kill ‘Em All, features Burton’s famous solo piece, “(Anesthesia) – Pulling Teeth”, which showcased his use of effects, such as a wah-wah pedal, not commonly used by bass guitarists.

Metallica’s debut album, Kill ‘Em All, was originally intended to inherit the name of one of their earlier demo releases (predating Burton’s participation), which was Metal Up Your Ass, but the record company did not like the title and insisted on changing it. After the band learned of the change, Burton said “We should just kill ’em all, man,” which gave the band members an idea for the new title. The album was released on July 25, 1983 through Megaforce Records.

The band’s second studio album, Ride the Lightning, showcased the band’s increasing musical growth. Burton’s songwriting abilities were growing, and he received credit on six of the album’s eight songs. Burton’s playing style and use of effects is showcased on two tracks: the chromatic intro to “For Whom the Bell Tolls”, and the “lead bass” on “The Call of Ktulu”.

The increase of musicianship on Ride the Lightning caught the attention of major record labels. Metallica was signed to Elektra Records, and began working on its third album, Master of Puppets, which is considered by most critics to be a landmark album in heavy metal. Burton is featured heavily on a number of tracks, most notably the instrumental “Orion”, which again featured Burton’s lead bass playing style. The album also contained Burton’s favorite Metallica song “Master of Puppets”. Master of Puppets was the band’s commercial breakthrough, but it would be Burton’s final album with Metallica.

Burton’s final performance was in Stockholm, Sweden, at the Solnahallen Arena on September 26, 1986, one day before his death. 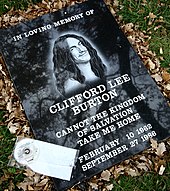 Memorial stone near the crash site, next to a CD copy of Master of Puppets.

During the European leg of the Damage Inc. tour in support of Master of Puppets, the band complained that the sleeping cubicles on their tour bus were unsatisfactory and uncomfortable. To decide who received pick of the bunks, Kirk Hammett and Burton drew cards. On the evening of September 26, 1986, Burton won the game with an ace of spades, thereby getting the first choice of bunk and pointed at Hammett and exclaimed, “I want your bunk!” Hammett replied, “Fine, take my bunk, I’ll sleep up front, it’s probably better up there anyway.” Burton was sleeping shortly before 7 am on September 27 when, according to the driver, the bus skidded off the road (the E4, 12 miles (19 km) north of Ljungby), and flipped onto the grass in Kronoberg County Burton was thrown through the window of the bus, which fell on top of him, resulting in his death.

James Hetfield later stated that he first believed the bus flipped because the driver was drunk. Hetfield stated that he walked long distances down the road looking for black ice and found none. Local freelance photographer Lennart Wennberg (who attended the crash scene the following morning), later asked in an interview about the likelihood that black ice caused the accident, said it was ‘out of the question’ because the road was dry and the temperature around 2 °C (36 °F). This was confirmed by police who found no ice on the road. Ljungby detective Arne Pettersson was reported in a local newspaper to have said the tracks at the accident site were exactly like ones seen when drivers fall asleep at the wheel. However, the driver stated under oath that he had slept during the day and was fully rested; his testimony was confirmed by the driver of a second tour bus that was carrying the band’s crew and equipment. The driver was determined not at fault for the accident and no charges were brought against him.

Burton’s body was cremated and the ashes scattered at the Maxwell Ranch. At the ceremony, the song “Orion” was played. The lyrics “…cannot the Kingdom of Salvation take me home” from “To Live Is to Die” are written on Burton’s memorial stone. Shortly after Burton’s death, Jason Newsted from Flotsam and Jetsam became Metallica’s new bassist, a position he held until his resignation in 2001. The role has since been filled by producer and studio musician Bob Rock and by the former bassist of Suicidal Tendencies and Ozzy Osbourne, Robert Trujillo.

Metallica wrote a tribute to Burton titled “To Live Is to Die” for …And Justice for All. Burton also received a writing credit for the lyrics and bass parts that were taken from unused bass recordings done by Burton which were re-recorded by Jason Newsted. A non-Metallica tribute to Burton is the song “In My Darkest Hour” by thrash metal band Megadeth. According to Dave Mustaine, due to hearing of Burton’s death, he sat down and wrote the music for the song in one sitting. The lyrics, however, are unrelated to Burton’s death. Mustaine was Metallica’s lead guitarist in the early days and was a close friend of Burton at the time.

On October 3, 2006, a memorial stone was unveiled in Sweden near the scene of the fatal crash. It is located by the parking lot to Gyllene Rasten.

Thrash metal band Anthrax dedicated its album Among the Living to him, as did Metal Church with The Dark.

On April 4, 2009, Burton was posthumously inducted into the Rock and Roll Hall of Fame, with fellow Metallica bandmates James Hetfield, Lars Ulrich and Kirk Hammett. Future bassists Jason Newsted and Robert Trujillo were inducted as well. During the ceremony, the induction was accepted by his father Ray Burton, who shared the stage with the band and mentioned that Cliff’s mother was actually Metallica’s biggest fan.

A biography, To Live Is to Die: The Life and Death of Metallica’s Cliff Burton, written by Joel McIver, was published by Jawbone Press in June 2009. Hammett provided the book’s foreword.

November 2016 Metallica released their latest album ‘Hardwired to Self Destruct’. This album features amongst new tracks a series of live recordings at Berkeley, California’s legendary record store Rasputin Music. This in celebration of Record Store Day 16th April 2016. The song Fade to Black was played with lead singer James Hetfield dedicating the song to the late Cliff Burton. During the song Hetfield yells ‘Can you hear us Cliff?’.