Hugh Colin Hopper was a British progressive rock and jazz fusion bass guitarist. He was a prominent member of the Canterbury scene, as a member of Soft Machine and various other related bands.

Starting in 1963 as bassist with The David Allen Trio, alongside drummer Robert Wyatt, he alternated between free jazz and rhythm and blues. In 1964 with Brian Hopper (his brother), Robert Wyatt, Kevin Ayers and Richard Sinclair he formed The Wilde Flowers, a pop music group. Although they never released any records during their existence (a compilation was released 30 years later), The Wilde Flowers are acknowledged as the founders of the Canterbury scene[2] and spawned its two most important groups, Soft Machine and Caravan.

Hopper’s role with Soft Machine was initially as the group’s road manager, but he already composed for their first album The Soft Machine and played bass on one of its tracks. In 1969 he was recruited to be the group’s bassist for their second album, Volume Two and, with Mike Ratledge and Robert Wyatt, he took part in a recording session for a solo album of Syd Barrett’s (formerly of Pink Floyd, with whom the early Soft Machine had regularly gigged). Hopper continued with Soft Machine, playing bass and contributing numerous compositions until 1973. During his tenure the group evolved from a psychedelic pop group to an instrumental jazz-rock fusion band. In 1972, shortly before leaving Soft Machine, he recorded the first record under his own name, 1984 (named after George Orwell’s novel Nineteen Eighty-Four). This was a decidedly non-commercial record featuring lengthy solo pieces using tape loops as well as shorter pieces with a group.

After leaving Soft Machine, through the end of the 1970s, he worked with such groups as Stomu Yamashta’s East Wind, Isotope, Gilgamesh, and the Carla Bley Band. He also played in a couple of cooperative bands alongside former Soft Machine saxophonist Elton Dean: Hopper/Dean/Tippett/Gallivan (with pianist Keith Tippett and drummer Joe Gallivan) and Soft Heap (with keyboard-player Alan Gowen and drummer Pip Pyle).

In the early 1980s Hopper gave up playing music for a couple of years, but by the mid-1980s he was 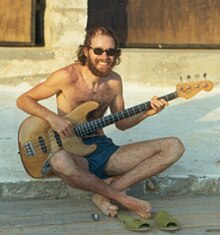 actively working with several bands, including Pip Pyle’s Equipe Out and Phil Miller’s In Cahoots. He also began playing with a group of Dutch musicians in a band initially called Hopper Goes Dutch. After French guitarist Patrice Meyer joined, this group became known as the Hugh Hopper Franglo-Dutch Band.

After many years working primarily in instrumental, jazz-oriented groups including Short Wave, in the mid-1990s Hopper began occasionally working again in more rock-oriented vocal contexts, including several collaborations with the band Caveman Shoestore (using the name Hughscore) and with singer Lisa S. Klossner. He also returned to his early tape loop experiments, but now using computer technology, in recordings such as Jazzloops (2002).

In the 1990s and 2000s several projects led Hopper to revisit his Soft Machine past. In 1998 he was asked to participate in a project by the French jazz collective Polysons, joining them in performances of Softs classics which featured Polysons members (Pierre-Olivier Govin and Jean-Rémy Guédon on saxes, Serge Adam on trumpet and François Merville on drums) plus organist Emmanuel Bex. The resulting Polysoft group was re-activated in 2002–03 to perform at Parisian club Le Triton, with fellow ex-Softs Elton Dean sitting in, resulting in a live CD, Tribute To Soft Machine, released on the club’s own label. Also in 2002–04, Hopper, Dean and two other former Soft Machine members (drummer John Marshall, and guitarist Allan Holdsworth) toured and recorded under the name SoftWorks. With another former Soft Machine member, guitarist John Etheridge, replacing Holdsworth, they toured and recorded as Soft Machine Legacy, playing some pieces from the original Soft Machine repertoire as well as new works. Three albums of theirs were released: Live in Zaandam (CD, rec. 2005/05/10), New Morning – The Paris Concert (DVD, rec. 2005/12/12) and the studio album Soft Machine Legacy (CD, 2006, rec. 09/2005). After Elton Dean who died in February 2006, Theo Travis [2] replaced him, and Soft Machine Legacy recorded the album Steam, released in 2007. Hopper also appeared on the 2004 debut solo album by No-Man singer Tim Bowness (My Hotel Year, on One Little Indian Records.

Other occasional projects were Soft Bounds (with French musicians Sophia Domancich and Simon Goubert, first with Elton Dean and then Simon Picard), which like PolySoft released a live CD recorded at the Triton club, and Clear Frame, an improvising group with Charles Hayward, Lol Coxhill and Orphy Robinson (augmented for their first release by Robert Wyatt on cornet).

Hopper recorded two solo albums for, and established an online shop via, the highly regarded UK-based internet label, Burning Shed . He worked with Japanese musician and composer Yumi Hara Cawkwell as a duo called HUMI. They had a tour of Japan planned for early 2008, which did not happen due to Hopper’s health.

Hopper was diagnosed with leukaemia in June 2008 and underwent chemotherapy. As a result of his illness and the treatment, he cancelled all his concert appearances. A Hugh Hopper benefit concert took place in December 2008 at the 100 Club in London and featured in Cahoots, members of Soft Machine Legacy, Delta Sax Quartet, Sophia Domancich and Simon Goubert, Yumi Hara Cawkwell, and the Alex Maguire Sextet.[5] Another benefit was planned for late June 2009. He married his partner Christine on 5 June 2009 and died of leukaemia on 7 June. His funeral, a Tibetan Buddhist ceremony to respect Hugh’s wishes, was held on 25 June 2009.

A series of ten CDs of unreleased live and studio recordings began release in 2014 by Gonzo MultiMedia to benefit Hugh’s family.