John Alec Entwistle (9 October 1944 – 27 June 2002) was an English singer, songwriter, composer, musician, film and music producer. In a music career that spanned more than 40 years, Entwistle was best known as the original bass guitarist for the English rock band the Who. He was the only member of the band to have formal musical training. He was inducted into the Rock and Roll Hall of Fame as a member of the Who in 1990.

Entwistle’s instrumental approach used pentatonic lead lines, and a then-unusual treble-rich sound (“full treble, full volume”) created by roundwound RotoSound steel bass strings. He was nicknamed “The Ox” and “Thunderfingers,” the latter because his digits became a blur across the four-string fretboard.In 2011, he was voted as the greatest bass guitarist of all time in a Rolling Stone magazine reader’s poll.According to the Biography Channel, Entwistle is considered by many to be the best rock bass guitarist that ever lived, and is considered to have done for the bass what Jimi Hendrix did for the guitar.

John Alec Entwistle was born on 9 October 1944 in Chiswick, a suburb of London. He was an only child. His father, Herbert, played the trumpet[7] and his mother, Maud (29 November 1922 – 4 March 2011), played the piano.. His parents’ marriage failed soon after he was born, and he was mostly raised by his mother at his grandparents’ house in South Acton.[ Divorce was uncommon in the 1940s, and this contributed to Entwistle becoming reserved and socializing little.

His musical career began aged 7, when he started taking piano lessons. He did not enjoy the experience and after joining Acton County Grammar School aged 11, switched to the trumpet, moving to the French horn when he joined the Middlesex School’s Symphony Orchestra. He met Pete Townshend in the second year of school, and the two formed a trad jazz band, the Confederates. The group only played one gig together, before they decided that rock ‘n’ roll was a more attractive prospect. Entwistle, in particular, was having difficulty hearing his trumpet with bands, and decided to switch to playing guitar, but due to his large fingers, and also his fondness for the low guitar tones of Duane Eddy, he decided to take up the bass guitar instead. He made his own instrument at home, and soon attracted the attention of Roger Daltrey, who had been the year above Entwistle at Acton County, but had since left to work in sheet metal. Daltrey was aware of Entwistle from school, and asked him to join as a bass guitarist for his band, the Detours.

After joining the Detours, Entwistle played a major role in encouraging Pete Townshend’s budding talent on the guitar, and insisting that Townshend be admitted into the band as well. Eventually, Roger Daltrey fired all the members of his band with the exception of Entwistle, Townshend and the drummer, Doug Sandom, a semi-pro player who was several years older than the others. Roger Daltrey relinquished the role of guitarist to Pete Townshend in 1963, instead becoming frontman and lead singer. The band considered several changes of name, and finally settling on the name the Who while Entwistle was still working as a tax clerk (temporarily performing as the High Numbers for four months in 1964). When the band decided that the blond Roger Daltrey needed to stand out more from the others, Entwistle dyed his naturally light brown hair black, and it remained so until the early 1980s.

Around 1963, Entwistle played in a London band called the Initials for a short while; the band broke-up when a planned resident engagement in Spain fell through.

In 1967, Entwistle married his childhood sweetheart Alison Wise and bought a large semi-detached home in Stanmore Middlesex filling it with all sorts of extraordinary artefacts, ranging from suits of armour to a tarantula spider. His eccentricity and taste for the bizarre was to remain with him throughout his life, and when he finally moved out of the city in 1978, to Stow-on-the-Wold in Gloucestershire, his 17-bedroom mansion, Quarwood, resembled a museum. It also housed one of the largest guitar collections belonging to any rock musician.

Entwistle picked up two nicknames during his career as a musician. He was nicknamed “The Ox” because of his strong constitution and seeming ability to “Eat, drink or do more than the rest of them.” He was also later nicknamed “Thunderfingers”. Bill Wyman, bass guitarist for the Rolling Stones, described him as “the quietest man in private but the loudest man on stage”. Entwistle was one of the first to make use of Marshall stacks in an attempt to hear himself over the noise of his band members, who famously leapt and moved about on the stage, with Pete Townshend and Keith Moon smashing their instruments on numerous occasions (Moon even used explosives in his drum kit during one memorable television performance on the “Smother Brothers Comedy Hour”). Townshend later remarked that Entwistle started using Marshall amplification to hear himself over drummer Keith Moon’s rapid-fire drumming style, and Townshend himself also had to use them just to be heard over Entwistle. They both continued expanding and experimenting with their rigs, until they were both using twin stacks with new experimental prototype 200 watt amps, at a time when most bands used 50–100 watt amplifiers with single cabinets. All of this quickly gained the Who a reputation for being “the loudest band on the planet”, a point well proven when they famously reached 126 decibels at a 1976 concert in London, listed in the Guinness Book of World Records as the loudest rock concert in history. The band had a strong influence at the time on their contemporaries’ choice of equipment, with Cream and the Jimi Hendrix Experience both following suit. Although they pioneered and directly contributed to the development of the “classic” Marshall sound (at this point their equipment was being built/tweaked to their personal specifications), they only used Marshall equipment for a couple of years. Entwistle eventually switched to using a Sound City rig, with Pete Townshend following suit later as well. Townshend points out that Jimi Hendrix, their new label mate, was influenced beyond just the band’s volume. Both Entwistle and Townshend had begun experimenting with feedback from the amplifiers in the mid-1960s, and Hendrix did not begin destroying his instruments until after he had witnessed the Who’s “auto-destructive art”. 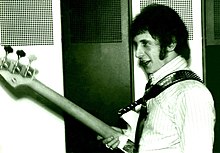 Entwistle backstage with The Who, 1967

Entwistle’s wry and sometimes dark sense of humour clashed at times with Pete Townshend’s more introspective, intellectual work. Although he wrote songs on every Who album except for Quadrophenia, he was frustrated at Townshend not allowing him to sing them himself. As he said, “I got a couple [of songs] on per album but my problem was that I wanted to sing the songs and not let Roger sing them.” This was a large part of the reason that he became the first member of the band to release a solo album, Smash Your Head Against the Wall (1971) which featured contributions from Keith Moon, Jerry Shirley, Vivian Stanshall, Neil Innes and the Who’s roadie, Dave “Cyrano” Langston.

He was the only member of the band to have had formal musical training. In addition to the bass guitar, he contributed backing vocals and performed on the French horn (heard on “Pictures of Lily”), trumpet, bugle, and jaw harp, and on some occasions he sang the lead vocals on his compositions. He layered several horns to create the brass section as heard on songs such as “5:15”, among others, while recording the Who’s studio albums, and for concerts, arranged a horn section to perform with the band. 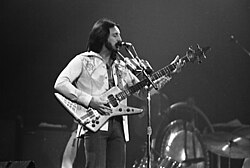 Entwistle designed the cover art for the band’s 1975 album The Who by Numbers and in a 1996 interview remarked that it had cost £30 to create while the Quadrophenia cover, designed by Pete Townshend, had cost £16,000.

Entwistle also experimented throughout his career with “Bi-amping,” where the high and low ends of the bass sound are sent through separate signal paths, allowing for more control over the output. At one point his rig became so loaded down with speaker cabinets and processing gear that it was dubbed “Little Manhattan,” in reference to the towering, skyscraper-like stacks, racks and blinking lights.