John Richard Deacon is an English retired musician, best known as the bass guitarist for the rock band Queen. He composed several singles for the group, including the top 10 hits “You’re My Best Friend”, “Another One Bites the Dust”, “Back Chat” and “I Want to Break Free”, and was involved in the band’s financial management.

Deacon grew up in Oadby, Leicestershire, playing bass in a local band, The Opposition, before moving to study electronics in Chelsea College, London. He joined Queen in 1971 on the strength of his musical and electronic skills, particularly the home-made Deacy Amp which guitarist Brian May used to create guitar orchestras throughout Queen’s career. From the third album, Sheer Heart Attack, onwards, he wrote at least one song per album, several of which became hits. As well as bass, Deacon played some guitar and keyboards on Queen’s studio work, but was the only member never to sing on their records.

Following frontman Freddie Mercury’s death in 1991, and the following year’s Tribute Concert, Deacon only performed a few times with the remaining members of Queen before retiring from the music industry in 1997 after recording “No-One but You (Only the Good Die Young)”. He has not performed on any of the other projects that the other two surviving members, May and Roger Taylor, have put together.

John Richard Deacon was born in Leicester on 19 August 1951,to Arthur Henry and Lilian Molly Deacon. His younger sister, Julie, was born five years later. His father worked at the Norwich Union insurance company and in 1960 the family moved to the dormitory town of Oadby. Deacon was known to friends and his bandmates as ‘Deaks’ or ‘Deaky’ and attended Linden Junior School in Leicester, Gartree High School and Beauchamp Grammar School in Oadby. He became interested in electronics, reading magazines on the subject and building small devices, including the modification of a reel to reel tape deck to record music directly off the radio.He studied well and achieved 8 GCE O level and 3 A level passes, all at grade A. He also enjoyed soul music in particular.

Deacon joined his first band, The Opposition, in 1965 at the age of 14. The band played covers of chart hits; Deacon played rhythm guitar using an instrument he had bought with money borrowed from the group’s founder, Richard Young. He switched to bass the following year after the original bassist was fired for not improving his playing as much as the other members. As well as a dedicated musician, Deacon also was the band’s archivist, taking clippings from newspapers of even the advertisements featuring The Opposition. After being in the band for four years, not long after the group cut an acetate of three songs, Deacon played his final concert with the band (then called The Art) in August 1969. He left as he had been accepted to study at Chelsea College in London (now part of King’s College London), where he eventually obtained a 1st class honours degree in Electronics in 1971. Having become a fan of Deep Purple, he saw the group perform the Concerto for Group and Orchestra with the Royal Philharmonic Orchestra at the Royal Albert Hall that September.

Although he left his bass and amplifier at home in Oadby, after less than a year of studying in London, he decided he wanted to join a band. By 1970, Freddie Mercury, Brian May, and Roger Taylor had already formed Queen; Deacon saw them in October that year but was not immediately impressed. Later in the year, he briefly formed a band called Deacon that made one live appearance at Chelsea College.

In early 1971, Deacon was introduced to Taylor and May by a friend at a disco who told him that they were in a band that had just lost its bassist. A couple of days later he auditioned in a lecture room at Imperial College London and became the last member of Queen to join. Since the band’s last bassist drew attention away from Mercury, Deacon was selected for his musical talent, his quiet demeanour and his electrical skills. A persistent legend claims Deacon was the seventh bassist auditioned, but more recent sources show Queen’s bassists were, in order: Mike Grose, Barry Mitchell, Doug Bogie and Deacon. Deacon played his first show with Queen at the College of Estate Management in Kensington in June.

On Queen’s first album (1973) he was credited as “Deacon John”, in order to make him “sound more interesting”. He asked to be credited under his real name, which was done on all other albums from Queen II (1974) onwards.

Deacon’s first writing credit came on Queen’s third album, Sheer Heart Attack (1974). He wrote “Misfire”, a Caribbean-themed song where he played almost all guitar parts, and co-wrote “Stone Cold Crazy” with the rest of the band. He also played some guide guitar parts on the album as May was hospitalised due to hepatitis when recording started. His second song, “You’re My Best Friend” (1975) was featured on the group’s fourth album, A Night at the Opera, and went on to be an international hit (it was written for his wife-to-be Veronica). Subsequently, Deacon tended to write one or two songs for every Queen album, until The Miracle (1989) and Innuendo (1991), which credited the band as a whole. He wrote the hit “Another One Bites The Dust” (1980) as a dance song based on his early love of soul. The song saw radio play on black and white US stations. He began to collaborate more with Mercury during the 1980s, as they both wanted to change the band’s musical direction.

Deacon played a larger role on the band’s 1982 album Hot Space. He played rhythm guitar on the opening “Staying Power” because of his soul and Motown-influenced style, and insisted on playing guitar on his own composition “Back Chat” and not allowing May to play any guitar solos because the style did not fit what Deacon wanted. This led to an acrimonious argument between the two. By the mid-1980s, Deacon had started to play with other bands as well. He performed on the single “Picking Up Sound” by Man Friday & Jive Junior, a supergroup also featuring Thin Lizzy’s Scott Gorham, Bad Company’s Simon Kirke and Mick Ralphs, and The Pretenders’ Martin Chambers. and played with The Immortals, which released the track “No Turning Back” as part of the soundtrack to the film Biggles: Adventures in Time. Deacon played bass on Mercury’s single with Montserrat Caballe “How Can I Go On” and also worked with Elton John and Hot Chocolate’s Errol Brown

Deacon considered his songwriting to be of equal importance to his musical skills in Queen. He later said “If I’d just been a bass player all my life with the band, I wouldn’t be as satisfied … I only consider that as part of what I do”.

Deacon was upset by Mercury’s death in November 1991, which was a trigger to reducing his musical activity. He later said, “As far as we are concerned, this is it. There is no point carrying on. It is impossible to replace Freddie. After playing live with Queen three more times – at The Freddie Mercury Tribute Concert for AIDS Awareness on 20 April 1992, in a charity concert with Roger Taylor in Midhurst on 18 October 1993, and at the opening of the Bejart Ballet in Paris on 17 January 1997, performing only “The Show Must Go On” with Elton John on lead vocals – he made the decision to retire from music, re-appearing only briefly by joining his former band mates in October 1997 for the recording of the final Queen song “No-One but You (Only the Good Die Young)”, included on the Queen Rocks album released a month later.

Deacon has reportedly spoken out about the May/Taylor/Robbie Williams cover of “We Are the Champions”, recorded for A Knight’s Tale, which he was not favourable about.

Since 1997, Deacon has retired from the music business. He chose not to be present at Queen’s induction into the Rock and Roll Hall of Fame in 2001, or join in the collaboration with Paul Rodgers, where he was replaced on bass by Danny Miranda. On the Queen + Paul Rodgers collaboration album The Cosmos Rocks which featured new material from the trio, he was listed in the Thanks Notes on the CD. May insists that Deacon is still involved on the business side of Queen but chooses to hide from public sight. May also confirmed that Deacon approves of the proposed Freddie Mercury biopic. In 2013, a newly-discovered species of the genus Heteragrion (Odonata : Zygoptera) from Brazil was named Heteragrion johndeaconi after Deacon, in honor of his musical and songwriting skills.

In a 2014 interview with Rolling Stone Magazine regarding the upcoming Queen + Adam Lambert North American tour with Adam Lambert, May and Taylor admitted that they no longer have much contact with Deacon except regarding finances, with Taylor stating that “[Deacon]’s completely retired from any kind of social contact”, and describing him as “a little fragile.” May added however, “He still keeps an eye on the finances, though. John Deacon is still John Deacon. We don’t undertake anything financial without talking to him.” Session bassist Neil Fairclough covered the tour. 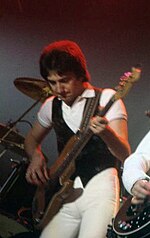 Deacon on stage at the New Haven Coliseum, Connecticut, US in 1977.

Rolling Stone Magazine wrote in 1973 that the combination of Taylor and Deacon “is explosive, a colossal sonic volcano whose eruption makes the earth tremble.” Deacon played guitar in addition to bass, taking over rhythm parts in many albums, as well as several acoustic performances. Some of the guitar work on Hot Space (the clean Fender Telecaster single-coil sound) is Deacon’s. He would occasionally play synthesizers on his own compositions and often composed at the piano, playing a Wurlitzer on “You’re My Best Friend”. He can also be seen playing the grand piano in the music video to “Spread Your Wings”, although on the actual recording the piano was played by Mercury.Unlike the other three members of Queen, Deacon did not sing on the group’s records.

Deacon’s first bass, used in the Opposition was an Eko, later switching to a Rickenbacker 4001. For most of Queen’s career, he used a Fender Precision Bass, which underwent a number of cosmetic changes. Towards the end of the group’s career, he used a custom bass designed by Roger Giffin. He also used an Ernie Ball MusicMan Stingray live on occasion. As a trained electronics engineer, he was able to build equipment for the band. His most famous creation is the “Deacy Amp”, built in 1972 from pieces of electronic equipment found in a skip, and used by himself and May throughout Queen’s recording career. Many of the so-called “guitar orchestras” on Queen albums use this amplifier.

Deacon usually played the bass with his fingers, instead of using a plectrum. He counted his influences as Chic, Michael Jackson and Stevie Wonder. His favourite bass players were Chris Squire of the progressive rock band Yes and The Who’s John Entwistle. A trademark of Deacon’s playing are his bass runs. A 1975 review of Sheer Heart Attack said “Only at the end would a new initiate to Queen recognize John Deacon’s unmistakable trademark … the least well known musician in Queen is one of his rock generation’s most able.”

Deacon has often been described as the “quiet” member of the band. Although the rest of the band felt he was the right bass guitarist for them, he barely spoke in rehearsals and avoided arguments.He lives in Putney in Southwest London with his wife Veronica, whom he married on 18 January 1975. One of the reasons for Queen splitting from Trident, their original management company, is that it refused to lend Deacon money to put a deposit on a house.

Queen songs Deacon wrote that were released as singles: