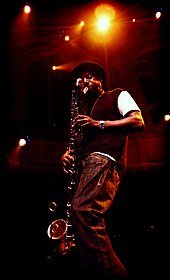 Miller at the Paradiso in Amsterdam, 2007

After being discovered by Michal Urbaniak in 1975, Miller spent approximately 15 years performing as a session musician, observing how band leaders operated. During that time he also did a lot of arranging and producing. He was a member of the Saturday Night Live band 1988–1989. He wrote the intro to Aretha Franklin’s “I Wanna Make It Up To You”. He has played bass on over 500 recordings including those of Luther Vandross, Grover Washington Jr., Roberta Flack, Carly Simon, McCoy Tyner, Bryan Ferry and Billy Idol. He won the “Most Valuable Player” award (given by NARAS to recognize studio musicians) three years in a row and was subsequently awarded “player emeritus” status and retired from eligibility. In the nineties, Miller began to write his own music and make his own records, putting a band together and touring regularly.

Between 1988 and 1990 he appeared regularly both as a musical director and also as the house band bass player in the Sunday Night Band during two seasons of Sunday Night on NBC late-night television.

As a composer, Miller co-wrote several songs on the Miles Davis album Tutu, including its title track. He also composed “Chicago Song” for David Sanborn and co-wrote “‘Til My Baby Comes Home”, “It’s Over Now”, “For You to Love”, and “Power of Love” for Luther Vandross. Miller also wrote “Da Butt”, which was featured in Spike Lee’s School Daze.

Miller currently has his own band. In 1997 he played bass guitar and bass clarinet in a band called Legends, featuring Eric Clapton (guitars and vocals), Joe Sample (piano), David Sanborn (alto sax) and Steve Gadd (drums). It was an 11-date tour of major jazz festivals in Europe.

In addition to his recording and performance career, Miller has established a parallel career as a film score composer (see listing below), having written numerous scores for films.

Miller has won numerous Grammy Awards as a producer for Miles Davis, Luther Vandross, David Sanborn, Bob James, Chaka Khan and Wayne Shorter. He won a Grammy Award for Best R&B Song in 1992, for Luther Vandross’ “Power of Love” and in 2001 he won for Best Contemporary Jazz Album for his seventh solo instrumental album, M².

In 2012 Miller was appointed an UNESCO Artist for Peace supporting and promoting the UNESCO Slave Route Project. His 2015 album, Afrodeezia, earned a Grammy Award nomination for Best Contemporary Instrumental Album.