Meshell Ndegeocello (/mɪˈʃɛl ndɛˈɡeɪoʊtʃɛloʊ/; born Michelle Lynn Johnson, is an American singer-songwriter, rapper, bassist, and vocalist. She has gone by the name Meshell Suhaila Bashir-Shakur which is used as a writing credit on some of her later work. Her music incorporates a wide variety of influences, including funk, soul, jazz, hip hop, reggae and rock. She has received significant critical acclaim throughout her career, and has had ten career Grammy Award nominations. She has been credited for having “sparked the neo-soul movement.”

Ndegeocello was born Michelle Lynn Johnson in Berlin, Germany, to army Sergeant Major and saxophonist father Jacques Johnson and health care worker mother Helen. She was raised in Washington, D.C. where she attended Duke Ellington School of the Arts and Oxon Hill High School. In early press releases from Maverick Records her birth year was erroneously listed as 1969. The 1968 birth date has been confirmed through a previous manager and lifelong friend.

Named Michelle Lynn Johnson at birth, Ndegeocello adopted her surname at the age of 17, which she says means “free like a bird” in Swahili. Early pressings of Plantation Lullabies were affixed with stickers to help pronounce her name. The spelling has changed in the hands of record labels a few times during her career; however, the correct spelling of her stage name is now Meshell Ndegeocello. 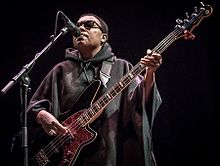 In 2016 at Cosmopolite Scene in Oslo

Ndegeocello honed her skills on the D.C. go-go circuit in the late 1980s with the bands Prophecy, Little Bennie and the Masters, and Rare Essence. She unsuccessfully tried out for Living Colour’s bassist position, vacated in 1992 by Muzz Skillings. Going solo, she was one of the first artists to sign with Maverick Records, where she released her debut album, Plantation Lullabies. This recording presented a distinctly androgynous persona.

Her biggest hit is a duet with John Mellencamp, a cover version of Van Morrison’s “Wild Night”, which reached No. 3 on the Billboard charts. Her only other Billboard Hot 100 hit besides “Wild Night” has been her self-penned “If That’s Your Boyfriend (He Wasn’t Last Night)”, which peaked at No. 73 in 1994. Also in 1994, Ndegeocello collaborated with Herbie Hancock on “Nocturnal Sunshine,” a track for the Red Hot Organization’s compilation album, Stolen Moments: Red Hot + Cool. The album, meant to raise awareness and funds in support of the AIDS epidemic in relation to the African American community, was heralded as “Album of the Year” by Time magazine.