Michael Andrew “Duff” McKagan is an American musician, singer, songwriter and author. He is best known for his twelve-year tenure as the bass guitarist of the hard rock band Guns N’ Roses, with whom he achieved worldwide success in the late 1980s and early 1990s. McKagan rejoined the band in 2016, following their induction into the Rock and Roll Hall of Fame.

Towards the end of his first tenure with Guns N’ Roses, McKagan released a solo album, Believe in Me (1993), and formed the short-lived supergroup Neurotic Outsiders. Following his departure from Guns N’ Roses in 1997, McKagan briefly reunited with his pre-success Seattle punk band 10 Minute Warning, before forming the still-active hard rock band Loaded, in which he performs lead vocals and rhythm guitar. Between 2002 and 2008, he played bass in the supergroup Velvet Revolver with his former Guns N’ Roses bandmates Slash and Matt Sorum. He briefly performed with Jane’s Addiction in 2010 and joined the supergroup Hollywood Vampires in 2016.

In addition to his musical career, McKagan has established himself as a writer. He has written weekly columns on a wide variety of topics for SeattleWeekly.com, Playboy.com, and ESPN.com. A former high school drop-out, he attended Seattle University’s Albers School of Business and Economics in the early 2000s, and subsequently founded the wealth management firm Meridian Rock.[7] He was a high school honor student, but dropped out early to pursue a career in music.

Michael Andrew McKagan grew up in Seattle’s largely working-class University District,[8] the youngest of eight children born to Alice and Elmer “Mac” McKagan. He has been called “Duff” since toddlerhood, to which he once referred as “an Irish thing” Following his parents’ divorce, his mother supported the family by taking a job as a medical stenographer. He was taught how to play bass by his brother Bruce, further developing his skills by playing along with the albums 1999 by Prince and Damaged by Black Flag.[9] In his autobiography, It’s So Easy (And Other Lies), McKagan said he was influenced by bass driven bands such as that of Barry Adamson in Magazine.

Although an honors student, McKagan dropped out of Roosevelt High School in the tenth grade. He then worked as a pastry chef for the Great American Food and Beverage Company while earning his GED. He was later awarded an honorary diploma after speaking at the class of 2012’s graduation ceremony.

In 1979, at the age of 15, McKagan formed the punk band the Vains, in which he played bass; they released the single “School Jerks” in 1980. During this time, he also played guitar in the punk band the Living, which opened shows for Hüsker Dü and D.O.A., which developed a devoted following.

In 1980, McKagan joined the pop-punk band the Fastbacks as their drummer. He appeared on their 1981 debut single “It’s Your Birthday”, which was issued on guitarist Kurt Bloch’s label No Threes Records, and on the song “Someone Else’s Room”, which was included on the Seattle Syndrome Volume One compilation album, also released in 1981.

In 1982, McKagan became the drummer for the hardcore punk band The Fartz, with whom he recorded several demos, five of which were included on their 1990 album You, We See You Crawling. After several line-up changes, The Fartz evolved into the post-punk band 10 Minute Warning, for which McKagan played guitar.

In 1983, McKagan moved to Los Angeles, California, with one of his brothers where he found work as an appetizer server at a Black Angus restaurant in Northridge. Answering an ad for a bass guitarist in a local newspaper, he met guitarist Slash and drummer Steven Adler, with whom he formed the short-lived band Road Crew. They auditioned a number of singers, including one-time Black Flag vocalist Ron Reyes, and worked on material that included the main riff of what would become the Guns N’ Roses song “Rocket Queen”. Slash eventually disbanded the group due to them not being able to find a singer, as well as Adler’s lack of work ethic compared to himself and McKagan.

In June 1985, McKagan replaced bassist Ole Beich in Guns N’ Roses, which was newly founded by singer Axl Rose and guitarist Izzy Stradlin of Hollywood Rose. McKagan’s Road Crew bandmates Slash and Steven Adler joined the band that same month. After two days of rehearsal, the line-up played its debut gig at The Troubadour on June 6. In 1987, Guns N’ Roses released its debut album, Appetite for Destruction, which to date has sold over 28 million copies worldwide, 18 million of which were in the United States, making it the best-selling debut album of all time in the U.S. The following year, the band released G N’ R Lies, which sold over five million copies in the U.S. alone, despite containing only eight tracks, four of which were included on the previously released EP Live ?!*@ Like a Suicide. In 1990, Steven Adler was fired from the band because of his heroin addiction; he was replaced by Matt Sorum of The Cult.

In May 1991, Guns N’ Roses embarked on the two-and-a-half-year-long Use Your Illusion Tour. The following September, the band released the long-awaited albums Use Your Illusion I and Use Your Illusion II, which debuted at No. 2 and No. 1 respectively on the U.S. chart, a feat unachieved by any other group. In November 1991, Izzy Stradlin abruptly left the band; he was replaced by Gilby Clarke of Kill For Thrills. In 1993, the band released “The Spaghetti Incident?”, a cover album of mostly punk songs, which proved less successful than its predecessors. McKagan took on lead vocals on four songs, including live favorite “Attitude”, originally by the Misfits. That same year, McKagan released his debut solo album, Believe in Me, on which he sang lead vocals and played virtually every instrument.

In 1995, with Guns N’ Roses largely inactive, McKagan formed the supergroup Neurotic Outsiders with Steve Jones of the Sex Pistols, John Taylor of Duran Duran, and his Guns N’ Roses bandmate Matt Sorum. Originally a gathering of friends jamming together at the Viper Room in Hollywood, they released their self-titled album on Maverick Records in 1996. The band played a brief tour of Europe and North America, before disbanding in 1997. In August of that year, McKagan left Guns N’ Roses as its last original member other than Axl Rose.

Following his departure from Guns N’ Roses in 1997, McKagan moved back to Seattle, where he met with many of his old friends, including Pearl Jam’s Stone Gossard, who convinced him to reunite 10 Minute Warning. Singer Christopher Blue was brought in to replace Steve Verwolf, who was serving a term in federal prison. In 1998, the band released their self-titled album on Sub Pop. The album featured nine tracks, including two new versions of songs originally recorded by The Fartz, namely “Is This the Way?” and “Buried”. 10 Minute Warning played its last show on August 22, 1998 at the Roseland theater in Portland, Oregon.

McKagan’s second solo album, Beautiful Disease, was intended to be released in 1999, but became lost in the legal shuffle of the merge between Geffen Records and Interscope Records.McKagan was dropped from Geffen’s roster, and subsequently lost all commercial rights to release the record. For the tour supporting his ill-fated solo album, he formed the band Loaded, which consisted of McKagan on bass and vocals, Dez Cadena, formerly of Black Flag, on guitar, Michael Barragan, formerly of Plexi, on guitar, and Taz Bentley, formerly of The Reverend Horton Heat, on drums. Loaded independently released the live record Episode 1999: Live, before disbanding in late 1999.

In 2000, McKagan reformed Loaded, remaining as the lead vocalist but switching from bass to rhythm guitar, and adding drummer Geoff Reading of Green Apple Quick Step, guitarist Mike Squires of Harvey Danger, and bassist Jeff Rouse of Alien Crime Syndicate. Both Squires and Rouse joined after the recording of the band’s debut album, Dark Days, released in 2001. Dave Dederer, formerly of The Presidents of the United States of America, took up recording duties for the album.

In 2002, while on tour, both Squires and Rouse left Loaded to join the reformed Alien Crime Syndicate. Former Wasted Youth and Electric Love Hogs guitarist Dave Kushner and former Burning Witch bassist George Stuart Dahlquist were brought in to replace them. McKagan and Kushner went on to form Velvet Revolver, putting Loaded on hiatus. 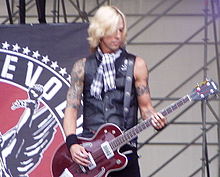 McKagan with Velvet Revolver at Gods of Metal in 2007

In 2002, McKagan founded the supergroup Velvet Revolver with his former Guns N’ Roses bandmates Slash and Matt Sorum, and Loaded guitarist Dave Kushner. Stone Temple Pilots singer Scott Weiland completed the line-up. In 2004, they released their debut album, Contraband, which debuted at No. 1 on the U.S. chart and sold two million copies. Their second album, Libertad, was released in 2007 to mixed reviews; it failed to achieve the same commercial success as its predecessor. The band toured extensively, until Weiland left in April 2008 to reunite with Stone Temple Pilots.[32] Velvet Revolver has been on hiatus since Weiland’s departure.

McKagan subsequently reunited Loaded, with Mike Squires and Jeff Rouse returning to the group, and that same year, they released the EP Wasted Heart. In 2009, the band released its second studio album, Sick, and embarked on tours with Mötley Crüe and Black Stone Cherry. Later that year, Geoff Reading departed the band; he was replaced by Isaac Carpenter.

In 2010, McKagan briefly joined Jane’s Addiction, with lead guitarist Dave Navarro originally confirming that McKagan had joined the band on a permanent basis.[37] On joining the band, McKagan stated, “Something like a chance to write, record, and perhaps even perform with a band of the quality of Jane’s Addiction does not come around every day. I have a lot of respect for this band and the guys in it.” He worked on several songs with Jane’s Addiction and played four shows with the band—two in Los Angeles, and two in Europe, including one at Rock in Rio in Madrid.

On September 6, six months after McKagan joined the band, Jane’s Addiction announced that they had parted ways due to the fact that “musically [they] were all headed in different directions.” 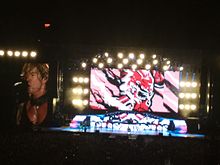 McKagan playing his solo spot of “Raw Power” at Arrowhead Stadium as part of the Not In This Lifetime… Tour.

On October 14, 2010, McKagan appeared on stage with Guns N’ Roses for the first time since 1993 at The O2 Arena in London. He played bass on “You Could Be Mine”, electric guitar on “Nice Boys” and “Knockin’ on Heaven’s Door”, and acoustic guitar and tambourine on “Patience”. McKagan then returned to Loaded, with whom he recorded a third studio album, The Taking, which was released in 2011. Loaded twice served as opening act for Guns N’ Roses in December of that year, with McKagan again briefly joining his old band on stage. On April 14, 2012, McKagan was inducted into the Rock and Roll Hall of Fame as a member of the classic lineup of Guns N’ Roses.

In 2012, Duff went on tour with the Rock N Roll All Stars, a band that consisted of many of rock’s most recognized performers. The band downsized and became the Kings Of Chaos in 2013. The primary members with Duff are Joe Elliott of Def Leppard and Joe Elliott’s Down N’ Outz, Matt Sorum of Guns N’ Roses and Velvet Revolver, Gilby Clarke of Guns N’ Roses and Steve Stevens of Billy Idol’s band. Others who round out the group are: Glenn Hughes of Deep Purple fame and Sebastian Bach, formerly of Skid Row. The band released the cover song “Never Before” by Deep Purple.

In 2016, McKagan was announced (alongside Slash), as having returned to Guns N’ Roses to headline Coachella.