Nathan Harrell East (born December 8, 1955) is an American jazz, R&B and rock bass player and vocalist. With more than 2,000 recordings, East is considered one of the most recorded bass players in the history of music. East holds a Bachelor of Arts degree in Music from the University of California, San Diego (1978). He is a founding member of contemporary jazz quartet Fourplay and has recorded, performed and co-written songs with performers such as Eric Clapton, Michael Jackson, Joe Satriani, George Harrison, Phil Collins, Stevie Wonder, Toto, Daft Punk, and Herbie Hancock.

Nathan Harrell East was born on December 8, 1955 in Philadelphia, Pennsylvania to Thomas and Gwendolyn East, he is one of eight children (five boys and three girls) raised in San Diego, where the family moved when he was four. East first studied cello in seventh through ninth grades and played in local Horace Mann junior high school’s orchestra. At age fourteen he developed an interest in the bass guitar, playing in church (Christ The King) for folk masses with his brothers Raymond and David. He was active in his (Crawford) high school’s music programs along with a local top 40 band called “Power”. He has said his early influences included Charles Mingus, Ray Brown and Ron Carter on upright bass; and James Jamerson, Paul McCartney and Chuck Rainey on electric bass. He studied music at UC San Diego. Nathan East is also an accomplished amateur magician member of The Magic Castle and the Academy of Magical Arts. 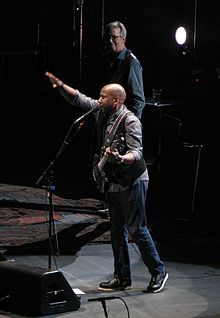 East was invited to play at We Are One: The Obama Inaugural Celebration at the Lincoln Memorial in Washington, D.C. in 2009, with a cast of luminaries of all genres of music.

East is one of the original members of the contemporary jazz group Fourplay, along with Bob James (keyboards), Lee Ritenour on guitar (later replaced by Larry Carlton and Chuck Loeb) and Harvey Mason (drums). Their Grammy Award-nominated albums have earned platinum status, and have topped Billboard’s contemporary jazz charts.

In early 2010, East was invited to join American Grammy Award-winning rock band Toto on their reunion tour to benefit member Mike Porcaro, who had been diagnosed with Amyotrophic lateral sclerosis (ALS). Another tour took place in the summer of 2011 with East once again playing. He was with the band during their summer tour in 2012. He is listed as a member on the official site of Toto as of 2013. East rejoined Eric Clapton’s band for a series of concerts in Japan, Singapore, Thailand and Dubai in February and March 2014 and again for the Madison Square Garden and Royal Albert Hall concerts of May, 2015.

In June 2012 he launched the Online Electric Bass School with Nathan East as a part of the ArtistWorks Bass Campus. www.nathaneastbass.com