A noted figure in UK pub rock, power pop and new wave, Lowe has recorded a string of well-reviewed solo albums. Along with vocals, Lowe plays guitar, bass guitar, piano and harmonica. He is best known for his songs “Cruel to Be Kind” (a US Top 40 single) and “I Love the Sound of Breaking Glass” (a top 10 UK hit), as well as his production work with Elvis Costello, Graham Parker, and others. Lowe also wrote “(What’s So Funny ‘Bout) Peace, Love, and Understanding”, a hit for Costello. He lives in Brentford, London, England.

Lowe attended the independent Woodbridge School in Suffolk. He began his musical career in 1967, when he joined the band Kippington Lodge, along with his school friend Brinsley Schwarz. His first EP is Nick Lowe with Kippington Lodge “I Can See Her Face” in 1969.They released a few singles on the Parlophone record label as Kippington Lodge before they renamed the band Brinsley Schwarz in late 1969 and began performing country and blues-rock. The group was launched by its management company Famepushers Ltd with an appearance at New York’s Fillmore East; a planeload of British journalists were flown over by Famepushers to witness the event, but the stunt backfired and Brinsley Schwarz became a laughing stock until they established credibility on the London pub rock circuit. Lowe wrote some of his best-known compositions while a member of Brinsley Schwarz, including “(What’s So Funny ‘Bout) Peace, Love, and Understanding”, a hit for Elvis Costello in 1979; and “Cruel to Be Kind”, also in 1979, Lowe’s single and biggest worldwide hit, co-written with bandmate Ian Gomm.

After leaving Brinsley Schwarz in 1975 Lowe began playing bass in Rockpile with Dave Edmunds. In August 1976, Lowe released “So It Goes” b/w “Heart of the City”, the first single on the Stiff Records label, where he was an in-house producer. The single and the label were funded by a loan of £400 from Dr. Feelgood’s Lee Brilleaux. The label’s first EP was Lowe’s 1977 four-track release Bowi, apparently named in response to David Bowie’s contemporaneous LP Low. The joke was repeated when Lowe produced the Rumour’s album Max as an ‘answer’ to Fleetwood Mac’s Rumours. Lowe continued producing albums on Stiff and other labels. In 1977 he produced Dr. Feelgood’s album, Be Seeing You, which included “That’s It, I Quit”, written by Lowe. Private Practice, issued the next year, included “Milk and Alcohol”, written by Lowe and Gypie Mayo. This song and “I Love the Sound of Breaking Glass” are the only Lowe compositions to reach the Top 10 of the UK Singles Chart.

Because the two main singers in Rockpile had recording contracts with different record labels and managers, albums were always credited to either Lowe or Edmunds, so there is only one official Rockpile album, 1980’s Seconds of Pleasure, which was not released until the waning days of the collaboration. Seconds of Pleasure featured the Lowe songs “When I Write the Book” and “Heart”. However, two of the pair’s most significant solo albums from the period, Lowe’s Labour of Lust and Edmunds’ Repeat When Necessary, were effectively Rockpile albums, as was Carlene Carter’s Lowe-produced Musical Shapes album. Lowe’s album Labour of Lust received a gold certification in Canada in November 1979.

Lowe was quoted as saying that he had “escaped from the tyranny of the snare drum” in No Depression, (September–October 2001) when explaining his move away from regular pop music that would get played on mainstream radio.

Other well-known Lowe songs include “I Love the Sound of Breaking Glass”, “All Men Are Liars”, and “Cruel to Be Kind”, co-written with Ian Gomm and originally recorded with Brinsley Schwarz for their unreleased final album “It’s All Over Now.” A re-recording of “Cruel to Be Kind” was his only US Top 40 hit, reaching No. 12 on the Billboard Hot 100 chart in 1979.

In 1979, Lowe married country singer Carlene Carter, daughter of fellow country singers Carl Smith and June Carter Cash and stepdaughter of Johnny Cash. He adopted her daughter, Tiffany Anastasia Lowe. The marriage ended in 1990, but they remained friends, and Lowe remained close to the Carter/Cash family. He played and recorded with Johnny Cash, and Cash recorded several of Lowe’s songs. Lowe and Carter’s 1979 wedding was filmed and the footage became the basis for the promotional video clip for “Cruel to be Kind”.

After the demise of Rockpile, Lowe toured for a period with his band Noise to Go and later with the Cowboy Outfit, which also included the noted keyboard player Paul Carrack. Lowe was also a member of the short-lived mainly studio project Little Village with John Hiatt, Ry Cooder and Jim Keltner, who originally got together to record Hiatt’s 1987 album Bring the Family.

In 1992, “(What’s So Funny ‘Bout) Peace, Love, and Understanding” was covered by Curtis Stigers on the soundtrack album to The Bodyguard, an album that sold about 44 million copies world-wide.

A New York Daily News article quoted Lowe as saying his greatest fear in recent years was “sticking with what you did when you were famous.” “I didn’t want to become one of those thinning-haired, jowly old geezers who still does the same shtick they did when they were young, slim and beautiful,” he said. “That’s revolting and rather tragic.” Rock critic Jim Farber observed, “Lowe’s recent albums, epitomised by the new At My Age, moved him out of the realms of ironic pop and animated rock and into the role of a worldly balladeer, specialising in grave vocals and graceful tunes. Lowe’s four most recent solo albums mine the wealth of American roots music, drawing on vintage country, soul and R&B to create an elegant mix of his own.”

In 2008, Yep Roc and Proper Records released a thirtieth anniversary edition of Lowe’s first solo album, Jesus of Cool (entitled Pure Pop for Now People in the US, with a slightly different track listing). The re-issue includes tracks from the British and American releases in addition to several bonus tracks. In March 2009, he released a 49-track CD/DVD compilation of songs spanning his entire career. Proper Records released it in the UK and Europe, entitled Quiet Please… The New Best of Nick Lowe.

Lowe played Glastonbury 2011, performing a short solo set of Brinsley Schwarz tracks on The Spirit of 71 stage, where they played back in 1971, before heading to the Acoustic Stage for a full band show.

In September and October 2011, Lowe performed as an opening act for Wilco’s North American tour.[15] In July 2013, he appeared and was well received at the London Hyde Park British Summer Time Festival, originally planned for a side stage, but promoted on to the main stage after headliner Elton John had to cancel. At both gigs he performed solo with acoustic guitar.

Lowe has been married twice. His first marriage to country singer Carlene Carter lasted from 1979 to 1990. He married Peta Waddington, a designer and DJ, in 2008. The couple have a son, Roy, who was born in 2005.

Lowe’s best-known songs include his own hits:

He also wrote songs most famous for their cover versions:

Some songs were written or co-written for albums he produced:

Lowe also wrote a number of songs with clever wordplay that qualify as “novelties”, among them:

Lowe’s work as a producer is at least as notable as his work as a performer and songwriter. His early ‘rough and ready’ production style earned him the nickname “Basher”, inspired by his supposed instructions to bands to ‘bash it out—we’ll tart it up later’. Beginning with his tenure at Stiff Records as an in-house producer in 1976, Lowe was responsible for producing some of the benchmark releases of punk and new wave, including the Damned’s first single, “New Rose”, considered the first English punk single, as well as the group’s debut album, Damned Damned Damned. He also produced Elvis Costello’s first five albums, from 1977 to 1981, including My Aim Is True, This Year’s Model, and Armed Forces, which spun off numerous UK hit singles. Other Stiff acts produced by Lowe included punk parody group Alberto y Lost Trios Paranoias, new wave icon Wreckless Eric and roots rocker Mickey Jupp.

Other clients (both before and after Lowe left Stiff in 1978) included the Pretenders (the 1978 debut single “Stop Your Sobbing”, which was a modest UK and U.S. hit); Graham Parker (his well-received first and third albums); Dr. Feelgood (several LPs, and their biggest hit single, 1979’s “Milk and Alcohol”); Johnny Cash (his 1980 single “Without Love”, a minor hit on the U.S. and Canadian country charts); and his then-wife Carlene Carter (2 albums in 1980 and 1981).

From 1982 to 1985, he produced material for Paul Carrack, John Hiatt, the Fabulous Thunderbirds and the Men They Couldn’t Hang. Beginning in the mid-80s, Lowe became more selective in his choice of outside production tasks, helming the 1986 LP Blood & Chocolate for Elvis Costello, a 1988 single (“Windows of the World” b/w “1969”) for the Pretenders, and the Katydids’ self-titled debut album of 1990. After that, Lowe essentially retired from producing recordings for other acts, although the country-rock band the Mavericks persuaded him to produce one track for the Apollo 13 soundtrack in 1995.

In 2011 the New York Times claimed, “The 40-year career of the English singer-songwriter Nick Lowe constitutes a paradox: the songs he has written are better known than he is.”

Alex Turner, of the Arctic Monkeys, said that he is ‘blown away’ and ‘back to square one’ by Lowe’s songwriting

Wilco covered the Nick Lowe song “I Love My Label” as the b-side to “I Might” on their own dBpm label. Nick Lowe toured with Wilco for their album The Whole Love and would make guest appearances on his “Cruel to Be Kind” and (along with Mavis Staples) appeared onstage for a cover of the Band’s song “The Weight.” Jeff Tweedy would state on stage that Lowe is “our hero.” 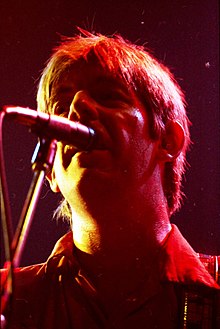 Lowe performing with Rockpile in 1980