Raymond Ian Burns known by the stage name Captain Sensible, is a singer, songwriter and guitarist.

Sensible co-founded the punk rock band The Damned, originally playing bass before switching to guitar. He embarked on a solo career during the 1980s, following a UK number one hit with his cover of “Happy Talk“.

Sensible was born in Balham, London, in 1954. He went to Stanley Technical School for Boys in South Norwood. The first musical instrument he played was a Bontempi organ.

Originally a member of the Johnny Moped band, Sensible joined The Damned in 1976 on the suggestion of his work colleague Rat Scabies, the band’s drummer, filling a number of positions during his tenure (including bassist, lead guitarist and keyboardist), and eventually becoming the band’s main songwriter following the departure of Brian James. He left in the 1980s to concentrate on solo projects, but rejoined in 1996 after Scabies left, and co-wrote Grave Disorder, the band’s first new studio album for 8 years, in 2001. He continues to tour with the band and they released their latest album So, Who’s Paranoid? on 17 November 2008.

Sensible’s first solo release came in 1978 with the single “Jet Boy, Jet Girl”, recorded while The Damned were on hiatus. He followed this in 1981 with an EP on Crass Records.[6] He signed to A&M Records and had a UK number one hit in 1982 with a cover of “Happy Talk”, the Rodgers and Hammerstein song from South Pacific, featuring backing by Dolly Mixture and a band including Robyn Hitchcock on guitar.[6] This was later sampled for rap artist Dizzee Rascal’s 2004 song “Dream”. Other songs which became hits in the UK and various European countries were “Wot”, “One Christmas Catalogue” and anti-Falklands War “Glad It’s All Over”, which was co-written and produced by Tony Mansfield. After quitting A&M Records he continued recording for various independent labels, including Deltic Records and Humbug Records. He has also toured with his solo band Punk Floyd.

His recording of “The Snooker Song” from Mike Batt’s musical The Hunting Of The Snark was used as the theme music for the BBC gameshow Big Break, and he also wrote and performed a song called “Brain’s Theme” for the movie Skinned Deep in 2004. 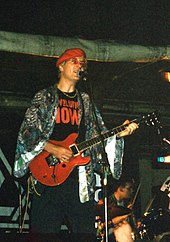 Playing live in Abergavenny in 1994

“I always wanted to put a brick through the TV when I saw Blair pop his head up. It’s quite easy to write lyrics when politicians are so corrupt. I had to start my own political party I was so angry. I called it the Blah Party. It was 50 per cent joke, 50 per cent serious but was my way of dealing with it.

In September 2006, he formed a new British political party known as the Blah! Party, saying “we believe that voting is an important part of the democratic process, and we want the Blah! Party to be the party of protest; a channel through which the people of the U.K. can vent their dissatisfaction at nonsensical everyday things, and protest against the government and the current crop of political parties.” The party was largely modelled on the principle of direct democracy, with suggestions being made by anyone on the party website. These suggestions would then be voted on by the membership, resulting in a “rolling manifesto.” The party was launched on 24 September 2006 at a conference in Manchester,coinciding with the Labour Party conference. Initial policies included making John Prescott lose weight, stopping the FA paying Sven-Göran Eriksson and stopping “chav culture and the idolisation of airhead celebrities like the Beckhams, Paris Hilton and Jade Goody”, alongside more serious policies of opposing the Iraq War and ID cards, instead spending money on public transport, hospitals and renewable energy.

The party entered into a sponsorship deal with Seabrook Crisps in September 2006, with the party logo and details on joining for free printed on their packets.The party also received non-financial support from PR company Propaganda. The party received £168,309 in the last quarter of 2006.[The party was fined by the Electoral Commission in 2007 for late return of accounts. The party was debt-free in 2008, with a membership of 8,544, up from 5,000 in 2007.

The first candidate was Carl Finlan, who stood in the 2007 local elections in Thornton and Allerton ward, Bradford. He gained 69 votes (1.6%).[ Deputy leader Melodie Staniforth stood in the Holme Valley North ward of Kirklees as ‘Boney Maroney’ in 2008.She gained 38 votes (0.68%).She resigned shortly afterwards.

On 11 September 2007, Propaganda (the PR company responsible for the founding of the party) stepped down from the running of the party and handed total control to Captain Sensible, former Official Monster Raving Loony Party deputy leader Melodie Staniforth, Robert Staniforth, Sadie Ingoldby, Shaun Nightingale and Gary Spate. In December 2008, Propaganda closed the website. The party ended its association with Propaganda and Seabrook, launching a new website. At the same time it de-registered from the register of political parties, deciding to instead be a protest group.

Captain Sensible was once married to Rachel Bor of Dolly Mixture. Sensible and Bor had three children together. Sensible later remarried and now has four children.