Richard Clare “Rick” Danko was a Canadian musician, bassist, songwriter and singer, best known as a member of The Band.

Danko was born on December 29, 1943 in Blayney, Ontario, a farming community outside the town of Simcoe, the third of four sons in a musical family of Ukrainian descent. He grew up listening to live music at family gatherings and to country music, blues and R&B on the radio. He especially liked country music, and often his mother would let him stay up late to listen to the Grand Ole Opry on the radio.

His musical influences included Hank Williams, the Carter Family and, later, Sam Cooke. He also drew inspiration from the music of his eldest brother, Junior. Danko’s second-eldest brother, Dennis, was an accomplished songwriter, and his younger brother, Terry, also became a musician.

He made his musical debut playing a four-string tenor banjo for his first-grade classmates.

Danko formed the Rick Danko Band at the age of 12 or 13. By age 14, Danko had left the Simcoe Composite School and started playing local dance halls with his band the Starlights. At 17, already a five-year music veteran, he booked himself as the opening act for Ronnie Hawkins, an  For years, it was erroneously reported that Danko was born on December 29, 1942. “It was a mistake and it just kept being reprinted,” Danko said. “Nobody ever corrected it.”

Although he was born on December 29, his actual year of his birth is 1943. According to Rick’s eldest brother, Maurice, Rick was born at home, and his parents did not file for a birth certificate right away. When they did get the certificate, it had the wrong year, 1942. The family did not get around to changing it, and young Rick used this earlier date to his benefit: It meant that he could get a driver’s licence earlier, get into bars earlier, etc. As the birth certificate was never changed, Rick’s driver’s licence also contained the same date. And since those two official IDs contained the erroneous year, his headstone was marked with the same date, since there was no other official confirmation of the real date. Another brother, Terry, also confirmed that Rick was born in 1943.

Hawkins invited Danko to join the Hawks as rhythm guitarist. Around this time, Hawks bassist Rebel Paine was fired by Hawkins, who, wasting no time, ordered Danko to learn to play the bass, with help from other members of the band. By September 1960, he was Hawkins’s bassist, using a Fender VI six-string bass, then switching to a Fender Jazz Bass.

Soon joined by pianist Richard Manuel and organist and reedsman Garth Hudson, the Hawks played with Hawkins through mid-1963. An altercation that year between Danko and Hawkins led Danko, Levon Helm, Robbie Robertson, Manuel, and Hudson to give two-weeks’ notice in early 1964, and they parted ways with Hawkins on reasonably amicable terms. The group had been planning to leave Hawkins and strike out together as a band without a frontman, as a team of equal members.

Danko and the former Hawks initially performed as the Levon Helm Sextet, with saxophonist Jerry Penfound, later became the Canadian Squires, after Penfound left, and finally were billed as Levon and the Hawks. Playing a circuit that stretched in an arc from Ontario to Arkansas, they became known as “the best damn bar band in the land.”

By 1965, with two singles under their belt, recorded as the Canadian Squires, they met the legendary blues harmonicist and vocalist Sonny Boy Williamson and planned a collaboration with him as soon as he returned to Chicago The group went on to play a four-month stand of gigs in New Jersey immediately afterward, but Williamson died two months after their meeting, and the collaboration never happened.[

In August 1965, Mary Martin, an assistant to Bob Dylan’s (and later the Band’s) manager, Albert Grossman, heard the music of the group, then known as Levon and the Hawks. Grossman told Dylan, who was impressed by their music. The group was performing at Tony Mart’s, a popular club in Somers Point, New Jersey, and Grossman’s office called the club to speak with Levon and the group about touring with Dyla

Helm was not happy to be backing a “strummer” but reluctantly agreed, and the band became Dylan’s backup group for a tour beginning in September. The tour, however, became too much for Helm, who departed in November. Through May 1966, Dylan and the remaining foursome (together with pick-up drummers, including the actor and musician Mickey Jones) traveled across America, Australia, and Europe. After the final shows in England, Dylan retreated to his new home in Woodstock, New York, and the Hawks joined him there shortly there.

Danko performing with the Band in Hamburg, 1971

It was Danko who found the pink house on Parnassus Lane in Saugerties, New York, which became known as Big Pink. Danko, Hudson, and Manuel moved in, and Robertson lived nearby. The Band’s musical sessions with Dylan took place in the basement of Big Pink, between June and October 1967, generating recordings that were officially released in 1975 as The Basement Tapes. In October, the Hawks began demo recordings for their first album, with Helm rejoining the group in that month. Their manager, Albert Grossman, secured them a recording deal with Capitol Records in late 1967.

From January to March 1968, the Band recorded their debut album, Music from Big Pink, in recording studios in New York and Los Angeles. On this album, Danko sang lead vocal on three songs: “Caledonia Mission”, “Long Black Veil” and “This Wheel’s on Fire.”

Before the Band could promote the album by touring, Danko was severely injured in a car accident, breaking his neck and back in six places, which put him in traction for months. While he was in traction, Danko’s girlfriend, Grace Seldner, informed him that she was pregnant, and he proposed from his hospital bed. When they married, Danko was still in a neck brace. The Band finally made their concert debut at Bill Graham’s Winterland Ballroom in San Francisco in April 1969.

By this time, they were already hard at work on their eponymous second album. On that record, sometimes known as the Brown Album, Danko sang what would become two of his signature songs—and two of the group’s best-loved classics: the reflective yet whimsical story-song “When You Awake” and the achingly poignant “Unfaithful Servant.” Both songs exemplified Danko’s talents as a lead singer and demonstrated his naturally plaintive voice.

Danko is featured in the documentary film Festival Express, about an all-star tour by train across Canada in 1970. On the train, he sings an impromptu version of “Ain’t No More Cane” with Jerry Garcia and Janis Joplin. The Band’s sound was defined by each member—Robertson’s lyrics and guitar work, Helm’s “bayou folk” drumming and Southern voice, Manuel’s Ray Charles–like vocals and complex keyboard rhythms, Hudson’s arrangements on an assortment of instruments and Danko’s distinctive tenor voice, his on-top-of-the-melody harmonies, and his percussive, melodic bass-playing style were an integral part of the group’s sound. In an interview published in Guitar Player, Danko cited bassists James Jamerson, Ron Carter, Edgar Willis, and Chuck Rainey as his musical influences. He eventually moved from the Fender Jazz Bass to an Ampeg fretless model and later a Gibson Ripper for the Last Waltz.

After the Band performed its farewell concert (the Last Waltz) at Winterland in November 1976, Danko was offered a contract with Arista Records by Clive Davis, making him the first Band member to record a solo album. Issued in 1977, his self-titled début featured each of his former bandmates in addition to Ronnie Wood, Eric Clapton, Doug Sahm, Blondie Chaplin, and Danko’s brother, Terry. The album was primarily recorded at the Band’s California studio, Shangri-La. The poor sales of the album destined it for rarity status. After he recorded an unreleased follow-up album, Danko was dropped from Arista. The follow-up album was finally released as a part of Cryin’ Heart Blues in 2005. 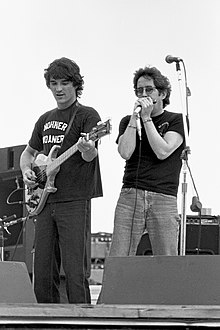 In early 1979 Danko opened shows for Boz Scaggs. Also in 1979, Danko and Paul Butterfield toured together as the Danko/Butterfield Band. Among the songs they covered was “Sail On, Sailor”, originally recorded by the Beach Boys, with Blondie Chaplin, who toured with Danko/Butterfield, on guitar and vocals. From 1983-99, Danko alternated between a reformed version of the Band featuring Helm, Hudson, and guitarist Jim Weider (and, from 1983 to 1986, Manuel); a solo career; and collaborations including award-winning work with singer-songwriter Eric Andersen and Norway’s Jonas Fjeld as Danko/Fjeld/Andersen.

In 1984, Danko joined members of the Byrds, the Flying Burrito Brothers and others in a touring company called “The Byrds Twenty-Year Celebration.” Several members of this band performed solo songs to start the show including Danko, who performed “Mystery Train”. In 1989, he toured with Levon Helm and Garth Hudson as part of Ringo Starr’s first All-Starr Band. Danko sang on the Pink Floyd songs “Comfortably Numb” and “Mother”, the former with Van Morrison, Roger Waters, and Levon Helm, and the latter with Helm and Sinéad O’Connor on July 21, 1990, in Roger Waters’s stage production of The Wall Concert in Berlin. He recorded demos and made a number of appearances on albums by other artists throughout the 1980s and 1990s, and, in 1997, released Rick Danko in Concert. Two years later, a third solo album (Live on Breeze Hill) was released, and Danko was at work on a fourth (Times Like These) at the time of his death.

In the meantime, the Band (without Robbie Robertson and Richard Manuel) recorded three more albums, and Danko teamed with Fjeld and Andersen for two trio albums, Danko/Fjeld/Andersen in 1991 and Ridin’ on the Blinds in 1994. By this time, Danko had gained a lot of weight, and his addiction to alcohol and drugs had intensified. In 1996, Danko was found guilty of receiving a package of heroin mailed to him in Japan. He told the presiding judge that he had begun using the drug (together with prescription morphine) to fight lifelong pain resulting from his 1968 auto accident. He received a two-and-a-half-year suspended sentence.

In 1994, Danko was inducted into the Rock and Roll Hall of Fame as a member of The Band.