Samuel Robert “Sam” Rivers (born in Jacksonville, Florida) is the bassist and backing vocalist of the band Limp Bizkit, and one of its founding members. He is the cousin of the band’s drummer, John Otto.

Rivers musical career started fairly early on, with him playing the tuba in a band in Arlington Middle School. He got into music initially because of his cousin John Otto, who played jazz-style drums.

He attended Bishop Kenny High School. He actually played guitar before he played bass, but switched at the suggestion of his music teacher. 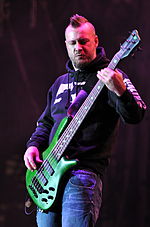 Rivers first met Fred Durst while working at a Chick-fil-A in a mall in Jacksonville. The two started talking, and found they shared several interests, including skateboarding and music. They decided to get together for a jam session. Rivers was becoming an accomplished bass guitarist, and Durst was to be a vocalist. Together with several other people they formed a short-lived band called Malachi Sage. Rivers’ talents on guitar would later come into play in Limp Bizkit’s Results May Vary album, the only album not featuring longtime guitarist Wes Borland, with Rivers playing both guitar and bass on select songs such as “Creamer” and “Lonely World”.

When the band did not work out, the two decided to try again, and this time John Otto came into the picture to be the drummer at the suggestion of Sam. In 1994 the three formed Limp Bizkit. Later on guitarist Wes Borland came into the fold, as well as DJ Lethal in 1996. Rivers was the youngest member of the band. When their first album Three Dollar Bill, Yall was released, he was only 19 years old.

Before the band travelled to Europe to attend some shows and the “Money Sucks” Tour through Russia, Rivers was diagnosed with a degenerative disease of the discs of the spine and that was complicated due to a pinched nerve, causing a lot of pain in that area. This prevents him from being with the band. Through the Armpit.net forums Sam offers this statement, adding that he will have surgery, following for rehabilitation. Bass duties are covered by Samuel Gerhard Mpungu

He was voted Best Bass Player at the 2000 Gibson Awards.

After Limp Bizkit went on hiatus, Rivers became a producer for local bands in Jacksonville. He produced the debut albums by Burn Season and The Embraced. Most recently, Rivers has been producing for the Orlando-based band Indorphine. Aside from producing their new studio material, Rivers got them booked as the opening act for a Mushroomhead/Soil concert.

In early 2009, Rivers reunited with Limp Bizkit for tours and their sixth studio album, Gold Cobrareleased in 2011.

His influences include bands such as Black Sabbath and Megadeth. Rivers cites Jeff Ament from Pearl Jam as a big influence on his playing.

Rivers was originally endorsed by Ibanez, and one of his basses was a customized BTB 5-string, but currently uses custom made Warwick basses, with LEDs in the fretboard. Rivers has also been seen using Wal Basses since 2005, mainly in the studio and uses Ampeg and Warwick amps.