Stephen Percy “Steve” Harris is an English musician and songwriter, known as the bassist, occasional keyboardist, backing vocalist, primary songwriter and founder of the British heavy metal band Iron Maiden. He is the only member of Iron Maiden to have remained in the band since their inception in 1975 and, along with guitarist Dave Murray, to have appeared on all of their albums.

Harris has a recognisable and popular style of bass playing, particularly the “gallop” which can be found on several Iron Maiden recordings, such as the singles “Run to the Hills” and “The Trooper”. In addition to his role as the band’s bass player, writer and backing vocalist, he has undertaken many other roles for the group, such as producing and co-producing their albums, directing and editing their live videos and performing studio keyboards and synthesizers. He has been cited as one of the greatest heavy metal bassists.

Harris was born and grew up in Leytonstone, where he grew up aspiring to be a professional footballer Scouted by Wally St Pier, Harris was asked to train for West Ham United. After gaining an interest in rock music in his early teens, he released that he no longer desired to play football professionally.

Initially Harris wanted to play drums, but did not have enough space for a drum kit in his house and so decided on the bass instead. Entirely self-taught, his first bass was a copy of a Fender Precision model which cost him £40 in 1971.

Just 10 months after he bought his first bass, Harris joined a band, initially known as Influence and later Gypsy’s Kiss, featuring Bob Verscoyle (lead vocals), Dave Smith (guitar) and drummer Paul Sears. After a short number of gigs at the Cart and Horses pub in Maryland Point, Stratford and the Bridgehouse in Canning Town, the band split up and Harris auditioned for a band called Smiler in February 1974. In this outfit, Harris began writing his own songs and worked with future Iron Maiden members Dennis Wilcock and Doug Sampson,] but left the band after they refused to play his material, claiming it was too complicated.

Upon leaving Smiler, Harris went on to create Iron Maiden on Christmas Day 1975, with the band’s name being inspired by the film The Man in the Iron Mask. Before Iron Maiden signed their contract with EMI in 1979, Harris worked as an architectural draughtsman in the East End of London until he was made redundant, at which point he undertook a job as a street sweeper.

Since their inception, Harris has been the band’s principal composer and lyricist. His song writing typically showcases his trademark galloping bass patterns, which features heavily in songs such as “The Trooper” and “Run to the Hills”, and his progressive rock-influenced time changes. Recently, Harris’ songs have become more progressive, and guitarist Adrian Smith has commented that Harris now prefers contributing “lyrics and melodies and arranging” to other member’s songs over writing alone. Harris frequently writes lyrics about mythology, history or topics inspired from books and films, reflecting his interests and progressive rock influences.

In September 2012, Harris released his first solo album, British Lion. Originating with a band, named British Lion, which he managed and wrote with in the early 1990s, Harris kept in touch with its vocalist, Richard Taylor, and guitarist, Graham Leslie, and the album, consisting of 1970s influenced hard rock songs, was written and recorded over a number of years around Iron Maiden’s tour schedule Speaking to Kerrang! in September 2012, Harris stated that he considers the record to be “more of a side-project” than a solo album, as he is more “comfortable in a band environment.”

In an interview with Classic Rock in August, Harris stated that he will be releasing more solo albums and hopes to tour with the band in the future. Harris has taken the outfit on two separate European club tours in 2013 and 2014, with an additional tour taking place in 2016. On 2 September 2016, Harris announced that he intends to issue a live album recorded at shows from across the three tours 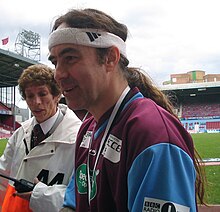 Harris’ eldest daughter, Lauren, is a singer and supported Iron Maiden with her solo outfit in 2006 and 2008. In 2008, she released a solo album, entitled Calm Before the Storm, and is currently a member of a band called Kingdom of  after forming Six Hour Sundown.In addition, Harris’ oldest son, George, plays guitar in a band, The Raven Age, and his second daughter, Kerry, works as a Production Assistant for Iron Maiden.

In 1993, Harris was divorced from his wife, Lorraine, whom he met 16 years previously This dark period in his life, which he described as “probably the toughest time I’ve ever faced,” is credited with inspiring the mood of the following Iron Maiden album, 1995’s The X Factor. Harris has four children with Lorraine: Lauren, Kerry, Faye and George.and two children with current partner Emma: Stanley and Maisie.

Since the 1980s, Harris has owned a Grade II listed building in Sheering Essex, in the grounds of which he built his own recording and editing studio, “Barnyard”. In November 2012, the nine-acre property was put on sale, with a spokesman for his estate agent, Hamptons International, stating that “he now lives between Los Angeles and the Bahamas”.

A keen footballer, Harris played for amateur clubs as a child and was later scouted by Wally St Pier and asked to train for West Ham United, of whom he has been a fan since he was 9 years old. Although he had aspired to play professionally up to that point, Harris would eventually realise that “it wasn’t really what [he] wanted to do.” Nevertheless, Harris still plays football regularly with his own team, “Maidonians”,] and still supports West Ham, staying in contact with the club, and having their crest on his most-used Precision Bass.

Harris is often considered among the best and most influential heavy metal bassists. He is most known for his “galloping” playing style: usually an eighth note followed by two sixteenth notes at fast tempo (e.g., “The Trooper” and “Run to the Hills”) or eighth note triplets, which he plays with two fingers, rather than using a plectrum] Before playing, Harris often chalks his fingers, to make these fast patterns easier to play, as shown on the bonus DVD for the A Matter of Life and Death album.[Iron Maiden guitarist Janick Gers has commented that “Steve taught himself in a way that nobody can really copy it. People say it’s like a lead guitar, but it’s not. It gives the band a basis and it moves around quite a lot, but it’s the tone that he has. Steve has a way of hearing things and a tone that isn’t normally associated with a bass, it’s more like a rhythm guitar.”

Harris mainly plays a specially-painted Fender Precision Bass, featured on every Iron Maiden album, which has gone through a total of four colour changes since he began using it. Originally white, it was then changed to black prior to the band’s first album, followed by blue sparkle and finally white with claret and blue pinstriping with the West Ham United F.C. crest. Harris has had his bass modified to include a mirrored scratchplate, Badass bridges and Seymour Duncan custom SPB-1 pickups and uses his own signature set of RotoSound flatwound strings. In 2009, Fender issued a signature Steve Harris Precision bass,[58] featuring an alder body, a blue-sparkle finish, mirrored scratchplate, Seymour Duncan SPB-1 pickups and a Badass II bridge. In 2015, Fender released a revised model of the signature bass, which now features a maple body, a white finish with blue pinstripes and the West Ham crest, a Fender High Mass bridge and a Seymour Duncan SPB-4 Steve Harris signature pickup.

In 2005, Metal Hammer reported that he uses eight 4×12″ Marshall cabinets with Trace Elliot amplifiers  He also uses four Sony WRT 27 wireless transmitters, allowing him to be as mobile as possible on stage. A diagram of Harris’ 2000 bass rig is documented on GuitarGeek.com.

Other interests and talents

In addition to playing bass and writing music/lyrics for the band, Steve Harris has taken on numerous other roles, such as:

Steve Harris is also known for playing an increasing role in mixing the band’s albums and produced most of their 1990’s output, with recording taking place at a studio he owned at the time, located in a barn on his property, named “Barnyard Studios”. Since 2000’s Brave New World, at Bruce Dickinson’s insistence, the band did not record again at Barnyard, which Dickinson claims had limitations due to its size, and hired Kevin Shirley, with whom Harris co-produces.

Harris also directs and edits many of the band’s live videos, beginning with Maiden England in 1989.Although not intending to himself, Harris edited the Rock in Rio DVD as he was unsatisfied with the results produced by the band’s hired production crew. In undertaking the project, Harris had to teach himself how to use digital editing software with equipment he had installed in Barnyard Studios,] and went on to edit Iron Maiden’s next DVD, Death on the Road. On top of this, he has contributed to the production of thirteen of the band’s music videos, with “Infinite Dreams”, “Holy Smoke”, “Tailgunner” and “Bring Your Daughter… to the Slaughter” being directed and edited by Harris alone. 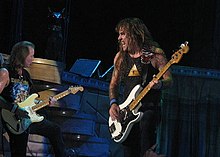