Steven Alexander “Alex” James FRSA  is an English musician and songwriter, as well as a journalist and cheese maker. Best known as the bassist of the band Blur, he has also played with temporary bands Fat Les, Me Me Me, WigWam and Bad Lieutenant.

for boys, where he started playing in bands. In 1988, James met future band mate Graham Coxon at Goldsmiths College, where James studied French. Introductions with Coxon’s old school friend Damon Albarn and Dave Rowntree soon took place; at the time Albarn and Rowntree were part of a band called Circus. In 1989, James joined Coxon, Albarn and Rowntree’s new band, Seymour, which would later be renamed Blur. While he has been in the band ever since, he now describes the experience as “a past-life”.[1] Despite this, Blur got together with returning bandmate Graham Coxon to perform at Glastonbury Festival, Hyde Park, Oxegen and T in the Park during the summer of 2009. They also played shows at Goldsmiths College, Essex Museum and other venues around the UK and mainland Europe. Blur headlined a show at Hyde Park for the 2012 Summer Olympics closing ceremony. In 2013, the band performed at the Rock Werchter in Belgium, the Spanish and Portuguese dates of the Primavera Sound Festival, and the Coachella Valley Music and Arts Festival in the United States. 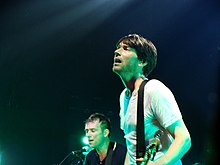 Unlike Albarn and Coxon, James has not released any solo material, although he has been involved in other collaborative side projects. In 1998, James formed Fat Les with actor Keith Allen and artist Damien Hirst, releasing (excluding three others) the unofficial theme song “Vindaloo” for the 1998 FIFA World Cup, which reached number 2 in the UK Singles Chart. He also worked on side project Me Me Me with Stephen Duffy, co-wrote songs for Marianne Faithfull (appearing in drag playing a double bass in the music video for her single “Sex With Strangers”) and Sophie Ellis-Bextor, and worked with Florence and the Machine and KT Tunstall. James worked with Ellis-Bextor on her solo debut Read My Lips, co-writing and co-producing “Move This Mountain”, and co-producing “I Believe” with Ellis-Bextor and producer Ben Hillier. He also played bass on both tracks. Ellis-Bextor’s 2003 album, Shoot from the Hip also featured James as bass player and co-writer on the track “Love Is It Love”. He also joined his friend and singer-songwriter Betty Boo in a band called WigWam in 2005. In 2009, James appeared as bass player on debut Bad Lieutenant record Never Cry Another Tear. The band consists of New Order lead singer Bernard Sumner and guitarist Phil Cunningham, along with Jake Evans of Rambo And Leroy.

In 2013, James co-wrote the song “Did I Lose You?” performed by Giorgia and Olly Murs.

Alex James is a food writer for The Sun and has a weekly column, ‘Alex James on All Things Food’;] as well as a regular column on farm and family life in The Sunday Telegraph titled ‘Mucking In’.He also writes a monthly column on cheese for Esquire Magazine. Alex contributes to a number of other British newspapers including The Independent, The Observer, The Times, and The Sunday Times, as well as Q magazine, The Spectator and The Idler. An autobiography of James’s experience with Blur, Bit of a Blur, was released in June 2007 by Little, Brown & Company. It has since been described as “the definitive guide to Britpop”. James published a follow-up entitled ‘All Cheeses Great and Small: A Life Less Blurry’ in September 2011, charting his transformation from rock star to cheese maker as he moves to a farm in Oxfordshire.