Stanley Clarke is an American jazz musician and composer known for his innovative and influential work on double bass and electric bass as well as for his numerous film and television scores. He is best known for his work with the fusion band Return to Forever, and his role as a bandleader in several trios and ensembles.

Clarke was born in Philadelphia. He was introduced to the bass as a schoolboy when he arrived late on the day instruments were distributed to students and acoustic bass was one of the few remaining selections. A graduate of Roxborough High School in Philadelphia, he attended the Philadelphia Musical Academy, (which was absorbed into the University of the Arts in 1985) from which he graduated in 1971. He then moved to New York City and began working with famous bandleaders and musicians including Horace Silver, Art Blakey, Dave Brubeck, Dexter Gordon, Gato Barbieri, Joe Henderson, Chick Corea, Pharoah Sanders, Gil Evans and Stan Getz. 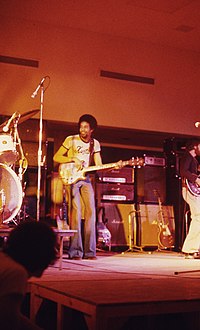 During the 1970s, Clarke joined the jazz fusion group Return to Forever, led by pianist and synth player Chick Corea. The group released several albums that achieved both mainstream popularity and critical acclaim. In 1981, Clark and George Duke formed the Clarke/Duke Project. Their song “Sweet Baby” was a Top 20 hit. In 2006 Clarke reunited with George Duke and toured with him for the first time in fifteen years.

Stanley Clarke was also a member of The New Barbarians, a band Ronnie Wood (The Rolling Stones) had assembled in 1979 to play gigs in the US, Canada and UK. Other band members included Keith Richards, Ziggy Modeliste (The Meters), Ian McLagan and Bobby Keys. This version of the New Barbarians played their final concert in the Knebworth Festival, 1979. To date three official live recordings have been released of the New Barbarians 1979 tour. These all include Stanley Clarke as bass player.

In the late 1980s, Clarke and drummer Stewart Copeland, of the rock band The Police, formed Animal Logic with singer-songwriter Deborah Holland. In 2005 Clarke toured as Trio! with Béla Fleck and Jean-Luc Ponty. The U.S. and European tour was nominated for a 2006 Jammy Award in the category of “Tour of the Year.” He has also played with Jeff Beck, Ron Wood, Larry Carlton, Billy Cobham and Al Di Meola.

Clarke started his solo career in the early 1970s and released a number of albums under his own name. His best kno 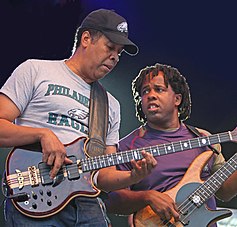 wn solo album is School Days (1976), which, along with Jaco Pastorius’s self-titled debut, is one of the most influential solo bass recordings in fusion history. His albums Stanley Clarke (1974) and Journey to Love (1975) are also notable.

Clarke released The Toys of Men in 2007. This was his first release in five years, on October 17, 2007. The first week of release it went to No. 2 on the Contemporary Jazz Chart of Billboard magazine. The album examines the subject of war, and it includes performances by Esperanza Spalding, Ruslan Sirota, Paulinho da Costa and Mads Tolling.