William Earl “Bootsy” Collins is an American musician and singer-songwriter.

Rising to prominence with James Brown in the early 1970s, and later with Parliament-Funkadelic, Collins’s driving bass guitar and humorous vocals established him as one of the leading names in funk. He is a member of the Rock and Roll Hall of Fame, inducted in 1997 with 15 other members of Parliament-Funkadelic.

In March 1970, after most of the members of James Brown’s band quit over a pay dispute, The Pacemakers were hired as Brown’s backing band and they became known as The J.B.’s. (They are often referred to as the “original” J.B.’s to distinguish them from later line-ups that went by the same name.) Although they worked for Brown for only 11 months, the original J.B.’s played on some of Brown’s most intense funk recordings, including “Get Up (I Feel Like Being a) Sex Machine”, “Bewildered (1970)”, “Super Bad”, “Soul Power”, “Talkin’ Loud and Sayin’ Nothing”, and two instrumental singles, the much-sampled “The Grunt” and “These Are the J.B.’s”.

Next Collins moved to Detroit, after Philippé Wynne suggested joining The Spinners, for whom Wynne had been singing. However, following the advice of singer and future Parliament member Mallia Franklin, Collins had another choice. Franklin there introduced both Collins brothers to George Clinton, and 1972 saw both of the Collins brothers, along with Waddy, join Funkadelic. Collins played bass on most of Funkadelic and all of Parliament’s albums (with the exception of Osmium) through the early 1980s, garnering several songwriting credits as well.

Like Clinton, Collins took on several alter egos, from Casper the Funky Ghost to Bootzilla, “the world’s only rhinestone rockstar monster of a doll”, all as parts of the evolving character of an alien rock star who grew gradually more bizarre as time went on (see P-Funk mythology). He also adopted his trademark “space bass” around this time.

Collins released two 1980 albums, his first “solo” album “Ultra-Wave”, and Sweat Band, on George Clinton’s Uncle Jam label with a group billed as Bootsy’s Sweat Band. He also was credited for producing the debut of P-Funk spinoffs Zapp and Roger.

In 1984, he collaborated with Jerry Harrison of Talking Heads to produce “Five Minutes”, a dance record sampled and edited from Ronald Reagan’s infamous “We begin bombing in five minutes” speech. The record was credited to “Bonzo goes to Washington” (also referenced in the 1985 Ramones song “Bonzo Goes to Bitburg”, derived from Reagan’s starring role as Professor Peter Boyd in the 1951 comedy film Bedtime for Bonzo).

After a nearly five-year hiatus, he had a comeback in 1988 (with some help from producer Bill Laswell). What’s Bootsy Doin’? flaunted a new sound that foreshadowed the 1990s, such as the dance floor smash “Party on Plastic”. Laswell introduced Collins to Herbie Hancock, resulting in Perfect Machine. The techno-funk they recorded featured turnables for scratch appeal, and the smoothly-stylized vocals of Leroy “Sugarfoot” Bonner of chart-topping Ohio Players.

In 1990, Collins collaborated with Deee-Lite on their massive hit “Groove Is in the Heart” where he contributed additional vocals. Although he also appeared in the music video playing the bass, the bassline in the song is actually a sample of a Herbie Hancock song called “Bring Down the Birds”. Bootsy’s Rubber Band became the de facto backing musicians for Deee-Lite during a world tour. The Rubber Band also recorded the EP “Jungle Bass”, their first recording in 11 years.

In 1995, Collins played in the remake of Jimi Hendrix’s “If 6 Was 9,” for Axiom Funk, a Funkadelic-like one-off supergroup produced by Bill Laswell and featuring (Funkadelic members) George Clinton, Bernie Worrell, Bootsy Collins, (the guitar of the late) Eddie Hazel, Gary Shider and Bill Laswell. The group released only one album (Funkcronomicon), and the song also appeared in the soundtrack of the movie Stealing Beauty.

Collins collaborated with Del McCoury, Doc Watson and Mac Wiseman to form the GrooveGrass Boyz. They produced a fusion of bluegrass and funk. 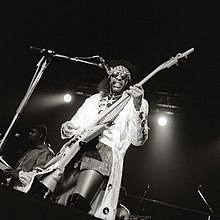 In October 2005, Collins co-wrote a song celebrating the resurgence of his hometown team, the Cincinnati Bengals of the National Football League called “Fear Da Tiger” which features “raps” written and performed by several Bengals players, including defensive end Duane Clemons, offensive tackle Stacy Andrews, and center Ben Wilkerson. An edited version of the song was made into a music video which features cameos by many other Bengals players. Collins appeared with Little Richard, Bernie Worrell, and other notable musicians as the band playing with Hank Williams, Jr. for the Monday Night Football opening during for the 2006 season. Collins was the only all star to return with Williams for the 2007 season.

He also sings “Marshal Law”, the theme song of the Cincinnati Marshals indoor football team. He debuted the song on April 29,[year missing] at half time of a Marshals home game against the West Palm Beach Phantoms.

In 2006, ABC Entertainment / A Charly Films Release released a DVD/CD from Collins and the New Rubber Band’s concert at the 1998 North Sea Jazz Festival. Soon after the release, Collins split from long-time friend and guitarist Odhran “The Bodhran” Rameriz, citing creative differences as the reason.

Later that same year, Collins released the holiday album Christmas Is 4 Ever. This represents the first Christmas-themed album made by any member of the P-Funk musical collective. The album features re-workings of Christmas standards as well as original compositions.

In June 2007, Collins, along with Phelps Collins, Clyde Stubblefield, John “Jabo” Starks, and Bernie Worrell, participated in the recording of the soundtrack for the movie Superbad. In December of that year they (sans Worrell) went on to perform the first tribute concert remembering James Brown.

In July 2007, Collins also told Billboard magazine that he was working on a project by the name of Science Faxtion and an album called Living on Another Frequency in which he serves as bassist and co-producer along with his lead vocalist Greg Hampton. The band also features guitarist Buckethead and drummer Brain.[2] The album was released in November 2008.[3] 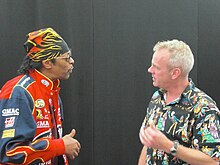 Collins promoted Rock the Vote for its 2008 campaign together with Buckethead.[4]

Collins portrayed a radio DJ in the 2013 video game, Grand Theft Auto V, in which several of his own songs were featured.

His original “Space Bass” and its replacement (before recovery from theft) was made in Warren, Michigan by Larry Pless of Gus Zoppi’s music store. The first Space Bass had a mahogany body and maple neck, white finish, and mirror pick guard. This is the Space Bass on the cover of 1976 album Stretchin’ Out in Bootsy’s Rubber Band.[6]

Collins’ current signature instrument is a custom-built star-shaped bass guitar he calls the “Space Bass”, built for him by Manuel “Manny” Salvador of GuitarCraft in 1998. In 2006 Collins made an agreement with Traben to make a signature Collins model bass called the “Bootzilla”. During the 2010 NAMM Show, Collins’ new signature bass guitar was released by Warwick, a customized Infinity Bass called “Bootsy Collins Black Star Signature Bass” or “Bootsy Collins Orange Star Signature Bass”, depending on the color of the stars on it.

In July 2010, Collins, in partnership with former child actor Cory Danziger, launched Funk University (“Funk U”), an online-only bass guitar school in which he also serves as curator and lead professor. Funk University offers an intense curriculum tailored for intermediate to advanced bass players as well as anyone interested in a deeper understanding of funk. The curriculum is based on bass theory, history of funk, and Collins’ own musical history given by Collins himself, augmented by lessons and exercises in bass and rhythm from guest bassist professors such as Les Claypool, Meshelle Ndegeocello, John B (Williams) and Victor Wooten.

Enrolled students gain access to the virtual campus which, in addition to the multimedia lectures, includes a comprehensive subject library containing audio and multimedia music files, tablatures, and articles. Students participate in interactive questionnaires, polls, competitions (including track submissions), and are subjected to regular reviews by faculty members, who have designated “office hours” during which students can ask questions. Students and faculty can post or reply in the university’s online forum (the Cafeteria).[8] Eventually, the curriculum will be expanded to include other instruments.

He has been mentioned in the song “Genius of Love” by Tom Tom Club in the line “Clinton’s musicians such as Bootsy Collins raise expectation to a new intention”, while “Got more bass than Bootsy Collins” is a line in the song “Rumble in the Jungle” by the Fugees. His influence in popular culture is seen in that he has been referenced by a number of television series. In The Fresh Prince of Bel-Air episode “Sooooooul Train”, Geoffrey sneaks into the Soul Train tapings posing as Collins, while in The Mighty Boosh episode “The Legend of Old Gregg” an alien creature named ‘The Funk’ lands on Collins’ house, giving him his ability to play the bass guitar “like some kinda delirious funky priest”, as well as the ability to see around corners.

Red Hot Chili Peppers bassist Flea, who cited Collins as one of his primary influences, appeared in unmistakably Collins style clothing in the video for RHCP’s “Dani California”, and Collins’ “What’s a Telephone Bill?” was sampled for 2Pac’s “Str8 Ballin’” track from his Thug Life: Volume 1album.

In 2004 Collins was featured on the cover of “The Joker” on the Fatboy Slim album Palookaville.[10] Collins served as “Heineken’s Amsterjam 2005” curator and master of ceremonies on Randall’s Island, New York. On January 26, 2007, Collins gave the commencement address at the graduation ceremony at The Art Institute of Ohio – Cincinnati.

In March 2011, Collins and his wife visited Franklin L. Williams M.S #7’s Little Kids Rock program, donated a bass guitar, gave the children a bass lesson, and rapped with them while they played the blues. He is now an honorary board member of the organization.

“I’d Rather Be with You”, from the album Stretchin’ Out in Bootsy’s Rubber Band was featured in the movie Baby Boy.

In 1994, he contributed to the Soup Dragons’ last album, Hydroponic.[

Collins made appearances on two Fatboy Slim records Illuminati, as well as reading a poem at the end of FatBoy Slims’s release in the LateNightTales DJ mix series.

He has also worked with the Lo-Fidelity Allstars on the album Don’t be Afraid of Love, with Praxis, and with Buckethead on several occasions, for example on Buckethead’s first album, Bucketheadland.

In 2004 he appeared on Snoop Dogg’s Rhythm & Gangsta album.

He also performed a cover of the “Power of Soul” on the 2004 tribute album Power of Soul: A Tribute to Jimi Hendrix’.

Collins produced Junkyard Waltz by funk band Freekbass from Ohio, which was released in October 2008.

In 2009, Collins collaborated with Talib Kweli and Hi-Tek on the track “Internet Connection”.[18]

In 2000, Collins appeared with Madonna, Iggy Pop, Little Richard, and The Roots’ Questlove, in an American TV commercial for the Motorola ROKR phone.

Collins was featured in the 2002 film Standing in the Shadows of Motown.

Collins played an alien version of himself in the Williams Street spring break special Freaknik: The Musical on Adult Swim in March 2010.

On April 15, 2011, he appeared on Later… with Jools Holland, performing a memorable snippet of funk with Jools.

In the fall of 2011, Collins began being featured in a TV commercial for Old Navy in which he is making “boots” made by Bootsy to be sold at Old Navy.

He was also featured on an episode of Yo Gabba Gabba! on Nick, Jr..

Collins is the voice of Jimi Hendrix in the 2010 documentary, Jimi Hendrix: Voodoo Child, which is based on Hendrix’s own words from letters, interviews and other printed materials.[20][21]

The album True Love won the Grammy Award in 2004 for Best Reggae Album.

In October 2010, he was awarded a Lifetime Achievement Award by Bass Player Magazine at the Key Club in Los Angeles.